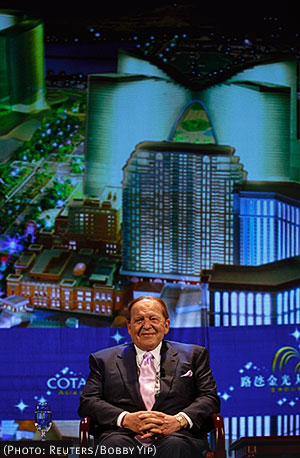 Less than a half-year ago, casino magnate Sheldon Adelson, the deep pockets of groups like Birthright Israel and the neoconservative-led Freedom’s Watch, was seen as one of the most formidable funders of the hawkish Right. But the global financial crisis, legal entanglements, apparent political disagreements, and tension between Adelson’s business model and some of his erstwhile political allies have all combined to blunt the magnate’s political impact. The result could be that some of the groups that are dear to neoconservatives and other rightist factions in the United States could soon find themselves looking for a new benefactor.

“Organizations, such as Freedom’s Watch, maintain their ability to influence public opinion through expensive purchases of commercials on television networks and in print media,” says Jim Lobe, a reporter for the Inter Press Service who has closely tracked Adelson’s influence in U.S. politics. “If the funding for these campaigns dries up, the relevance and influence of Freedom’s Watch will be severely diminished.”

Adelson, CEO of the Las Vegas Sands Corp., has seen his net worth plummet over the last year. As Forbes reported in September, “The biggest loser this year was casino mogul Sheldon Adelson, whose fortune has fallen $13 billion in the past 12 months—$1.5 million per hour—as shares of his Las Vegas Sands have dropped 75% from their all-time highs last October.”1 And from August 29 to October 1, Adelson’s worth dropped $4 billion—“the steepest drop among Americans who lost $1 billion or more during the credit crisis.”2 Those numbers, of course, came before the stock market crashed earlier this month. As Forbes.com quipped, “Rough year for Sin City’s richest man.”3

With shares in his casino empire plunging 65 percent, Adelson could cut back on his charitable giving. In fact, he announced in September he would do just that. “On September 9, billionaire casino mogul Sheldon Adelson announced that he was reducing his donations to Birthright Israel in 2009 and 2010, respectively, to $20 million and $10 million, after giving $70 million over the previous two years,” reported the Forward.4 Perhaps most noteworthy about the funding reduction is that it represents a turnabout in Adelson’s stated commitments; he had pledged in 2007 that “he and his wife would give at least $30M a year [to Birthright Israel] for as long as is needed,” according to an article posted on the website of the Adelson Family Foundation.5 Birthright Israel pays for young Jewish people from around the world to visit Israel for 10 days. As the Forward noted, “Adelson’s reduction in his gift will have a direct impact on the 18-to-26-year-old Jews who are Birthright’s target audience. Trips cost roughly $3,000 per participant, meaning that unless the organization raises other funds, it will lose the ability to fund more than 3,300 trips in 2009, and nearly 6,700 trips in 2010.”6

The diminished circumstances of the gambling mogul could well impact the fortunes of neoconservatives and other hawks reliant on his funding. Adelson is deeply connected to Israel’s Likud Party, a hawkish faction that generally opposes a two-state solution to the Israel-Palestinian conflict and has found much support in the neoconservative community. He has given considerable funding to the Zionist Organization of America and to the American Israel Public Affairs Committee (though he cut off his funding for the group after it endorsed the Annapolis peace talks). Another of Adelson’s pet projects has been funding the Adelson Institute of Strategic Studies at Jerusalem’s Shalem Center. The institute, chaired by former Likud Party member Natan Sharansky, was founded in 2006 with Adelson’s financial backing. In January 2008, it co-organized the Herzliya Conference on Israel’s national security; influential and well-connected speakers and panelists included Dick Cheney’s former Middle East advisor David Wurmser; Ben Wattenberg of the American Enterprise Institute; Steve Emerson; former U.S. ambassador to the United Nations John Bolton; and neoconservative figurehead Norman Podhoretz, among many others.7 And in 2007, the institute co-sponsored the Democracy and Security Conference in Prague, which the Adelsons attended. Participants included George W. Bush, Sen. Joe Lieberman, Richard Perle, Bruce Jackson, Michael Novak, and others with neoconservative links.8 With Adelson’s own funds now seriously diminished, it would not be surprising if he were unable to fund the institute to the degree he had in the past. This could put a dent, however small, in the ability of like-minded neoconservatives and foreign policy hawks to gather and conduct their business.

Through their charitable foundation, Sheldon Adelson and his wife, Miriam, enabled the establishment in 2007 of Freedom’s Watch, a lobbying group on whose board Sheldon Adelson also sits. While the Adelson Institute of Strategic Studies has played a key role in projecting the magnate’s Zionist- and Likud-oriented policies in Israel and Europe, Freedom’s Watch is in some way’s a platform for Adelson’s right-wing political beliefs within the United States. Freedom’s Watch was conceived in March 2007 as an offshoot of the Florida Republican Jewish Coalition, of which Adelson is a longtime member. The stated mission of Freedom’s Watch is to “support mainstream conservative public policies,”9 and the group’s lobbying and campaign contributions have reflected the staunchly pro-Iraq War and pro-Likud leanings of its most generous patron, Adelson.

But since early 2008, there has been friction at the group, much of it reportedly due to differences in goals between Adelson, the primary funder, and the group. As the New York Times reported in April, “Mr. Adelson has insisted on parceling out his money project by project, as opposed to setting an overall budget, limiting the group’s ability to plan and be nimble, the Republican operatives said. Mr. Adelson, who has a reputation for being combative, has rejected almost all of the staff’s proposals that have been brought to him, leaving the organization moribund for long stretches, the operatives said.”10 Speculation over the internal discord at Freedom’s Watch includes conjecture that Adelson might be hesitant to contribute to projects that would advocate or endorse the presidential campaign of Sen. John McCain (R-AZ), whose foreign policy toward China is notably hostile.11 Macau, where Adelson is pursuing a costly new casino development, is a tiny region of China—the only region in the Communist nati

on where gambling is legalized—that represents the potential for huge profits for Adelson.

Adelson’s business doings in China have earned him the ire of some on the religious Right, with whom Adelson has frequently joined forces to lobby for Likud-aligned policies on Israeli-Palestinian negotiations.12 After Freedom’s Watch released an ad in September 2008 criticizing Bobby Bright, conservative Democratic mayor of Montgomery, Alabama, the head of Alabama’s Christian Coalition, Randy Brinson, said in a statement, “Where Adelson has placed his treasure makes it quite clear where his heart is: in gambling and in backing the regime in China that persecutes Christians.” Referring in part to convicted lobbyist Jack Abramoff, Brinson added, “We’re tired of the Abramoffs and Adelsons of this world using their ill-gotten gains to try to buy elections and influence.”13

Adelson isn’t the only donor who is faced with tough choices as the current economic crisis worsens. Another key donor of Freedom’s Watch, investor Paul Singer, whose company “had minor exposure to the collapse of Lehman Brothers,” according to the Washington Post, has begun pulling back. “One Freedom’s Watch adviser familiar with appeals to Singer said efforts to enlist his eleventh-hour support have gone unanswered. ‘Understandably,’ said the adviser, who spoke on the condition of anonymity because discussions with donors are confidential. ‘The guy’s got a business to worry about.’”14

In the final analysis, with megadonors like Adelson returning their attention to worrying about their businesses, the influence of the groups they once supported could well decline. And the tiny fissures that have appeared in the Right, like that between Freedom’s Watch and the Christian Coalition, might eventually become large chasms.

Eli Clifton is a contributor to PRA’s Right Web (https://rightweb.irc-online.org/).