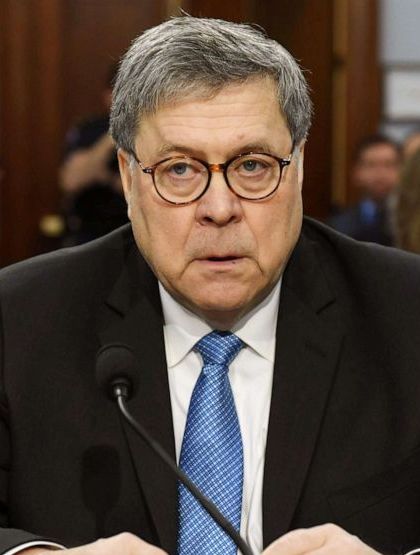 During his tenure in the Trump administration, Barr has proved to be an extreme loyalist to the president, going to extraordinary lengths to shield him from the various investigations that have engulfed his administration, including by promoting conspiracy theories about the origins of the probe into Russian influence in the 2016 presidential elections and seeking to mislead the public about the conclusions of the investigation into alleged collusion between the Trump campaign and Russia. In late 2019, for example, when news broke about a whistleblower’s complaint “alleging that the president of the United States is using the power of his office to solicit interference from a foreign country in the 2020 U.S. election,” Barr sought to suppress the complaint, leading a New York Times columnist to ask, “Just How Corrupt is Bill Barr?”

More recently, however, Barr has chafed at Trump’s incessant Twitter barrage, which has at times appeared to undermine Barr’s efforts to support the president’s talking points. In February 2020, Barr overruled his own Justice Department prosecutors in their sentencing recommendation for convicted longtime Trump confidante Roger Stone. However, before Barr intervened, Trump had turned to Twitter to attack the prosecutors, calling their sentencing recommendation a “miscarriage of justice,” which spurred their resignations. The ensuing scandal spurred Barr to say in an interview that Trump’s tweets about justice department prosecutors “make it impossible for me to do my job.” The House Judiciary Committee subsequently announced that it was launching an inquiry to determine whether there was improper political interference in federal law enforcement.

In March 2019, only a few weeks after Barr’s confirmation as attorney general, Special Counsel Robert Mueller released his much-anticipated report on his investigation into Russian interference in the 2019 election and possible collusion by the Trump campaign. Barr immediately became embroiled in controversy because of his decision to declare that, based on the report, the president had not obstructed justice when he fired FBI director James Comey. The decision is contained in Barr’s 4-page memo summarising Mueller’s findings. Mueller is quoted as reporting that the “investigation did not establish that members of the Trump campaign conspired or coordinated with the Russian government in its election interference.” However, the memo confirmed that Russia tried to interfere and had issued “multiple offers to assist the Trump campaign,” something that the campaign had never disclosed.

Neal Katyal, a former acting solicitor general, opined in a New York Times editorial that Barr’s summary finding that Trump did not obstruct justice, which was made less than 48 hours after receiving the report and in the apparent absence of an interview with Trump, is “deeply concerning.” He concluded: “Congress now has a clear path of action. It must first demand the release of the Mueller report, so that Americans can see the evidence for themselves. Then, it must call Mr. Barr and Mr. Mueller to testify. Mr. Barr in particular must explain his rationale for reaching the obstruction judgment he made. No one wants a president to be guilty of obstruction of justice. The only thing worse than that is a guilty president who goes without punishment. The Barr letter raises the specter that we are living in such times.”

Barr’s actions on the Mueller report appeared to confirm concerns that arose when his nomination to attorney general was announced in December 2018. Observers pointed to a memo he wrote in June 2018 criticizing the investigation. In the memo, Barr reportedly wrote that Mueller’s theory of obstruction of justice by Trump “is premised on a novel and legally insupportable reading of the law. Moreover, in my view, if credited by the department, it would have grave consequences far beyond the immediate confines of this case and would do lasting damage to the presidency and to the administration of law within the executive branch. … Mueller should not be permitted to demand that the president submit to interrogation about alleged obstruction. Apart from whether Mueller [has] a strong enough factual basis for doing so, Mueller’s obstruction theory is fatally misconceived.”[8]

Barr has been an influential conservative political figure since the 1980s. A one-time adviser to William Bennett‘s Americans for Victory Over Terrorism, Barr rose to prominence in the conservative network in  when he was appointed to a series of posts in the Justice Department. He was on the White House Domestic Policy Staff under President Reagan and served in the Central Intelligence Agency.[1] Barr was appointed as the 77thAttorney General of the United States from 1991 to 1993, reportedly as a result of his ties to Bush’s White House Counsel C. Boyden Gray.[2]

Bush consulted with Barr before pardoning many of the key figures in the Iran-Contra scandal that had rocked the Ronald Reagan administration in the 1980s.[3]

Barr largely disappeared from public life in 2008, after retiring from his role as vice president and general counsel at Verizon. He resurfaced early in Donald Trump’s administration when he penned an op-ed in support of Trump’s firing of acting attorney-general Sally Yates less than two weeks into his term over her refusal to enforce Trump’s ban on entry to the United States for people from seven predominantly Muslim countries.[4]

In November 2017, Barr—alone among ten former attorneys general asked—supported Donald Trump’s call to investigate his former opponent, Hillary Clinton. “There is nothing inherently wrong about a president calling for an investigation,” Barr told the New York Times. “Although an investigation shouldn’t be launched just because a president wants it, the ultimate question is whether the matter warrants investigation.”[5]

In December 2018, Trump nominated Barr to replace Jeff Sessions as attorney general. His previous support for Trump’s decisions, and their implications for Barr’s views of the investigations into Trump’s election activities, finances and other issues, were immediately controversial. Washington Post columnist Aaron Blake noted, “It seems quite the coincidence that Trump has settled on yet another attorney general who might be prepared to take his side on these very personal and political investigative issues in a way Sessions wouldn’t. It’s also notable that Barr seems to believe it isn’t so necessary to erect a wall between the presidency and the nation’s top law enforcement official—a wall that Trump has long desired to demolish.”[7]

Soon after Trump announced that he would nominate Barr, reports emerged that Barr had written a memo in June 2018 criticizing the investigation into Trump led by Robert Mueller. In the memo, Barr reportedly wrote that Mueller’s theory of obstruction of justice by Trump “is premised on a novel and legally insupportable reading of the law. Moreover, in my view, if credited by the department, it would have grave consequences far beyond the immediate confines of this case and would do lasting damage to the presidency and to the administration of law within the executive branch. … Mueller should not be permitted to demand that the president submit to interrogation about alleged obstruction. Apart from whether Mueller [has] a strong enough factual basis for doing so, Mueller’s obstruction theory is fatally misconceived.”[8]

Barr’s expressed opinions raised serious concerns among Democrats. “There is no question William Barr is an experienced lawyer, having previously served as attorney general,” Sen. Dianne Feinstein (D-CA)—who serves on the Senate Judiciary Committee—stated. “However, there are concerns about his independence, given his expansive views of executive power and partisan statements about pardons, the Mueller investigation and Hillary Clinton.”[9]

Senate Minority Leader Charles Schumer (D-NY) wrote on Twitter, “William Barr’s memo to the Department of Justice criticizing the Special Counsel investigation reveals that he is fatally conflicted from being able to oversee the Special Counsel’s investigation and he should not be nominated to be Attorney General. Mr. Barr believes presidents in general—and more frighteningly, President Trump, who has shown less respect for rule of law than any president—are above the law.”[10]

Barr has been associated with a number of right-wing groups, including the Federalist Society and the Heritage Foundation. More recently, Barr served as an advisor to Americans for Victory Over Terrorism, a Claremont Institute-based advocacy group that was founded shortly after the 9/11 attacks to promote an aggressive “war on terror.”

His work as attorney general landed him on http://www.law.com’s “100 Most Influential Lawyers” list. Barr is described as “a longtime leading strategist and advocate for local phone companies in the ever-growing battle over rights to markets; argued Supreme Court case resulting in decision invalidating F.C.C. rules ordering Baby Bells to open up their networks to competitors; leading the battle to preserve open and competitive Internet; attorney general in the Bush administration whose close ties with key members of Congress [who] were considered critical in assuring provisions favorable to GTE in deregulation.”[11]

[11] “The 100 Most Influential Lawyers”  http://www.law.com/special/professionals/influential/

[3] “The 100 Most Influential Lawyers”  http://www.law.com/special/professionals/influential/.