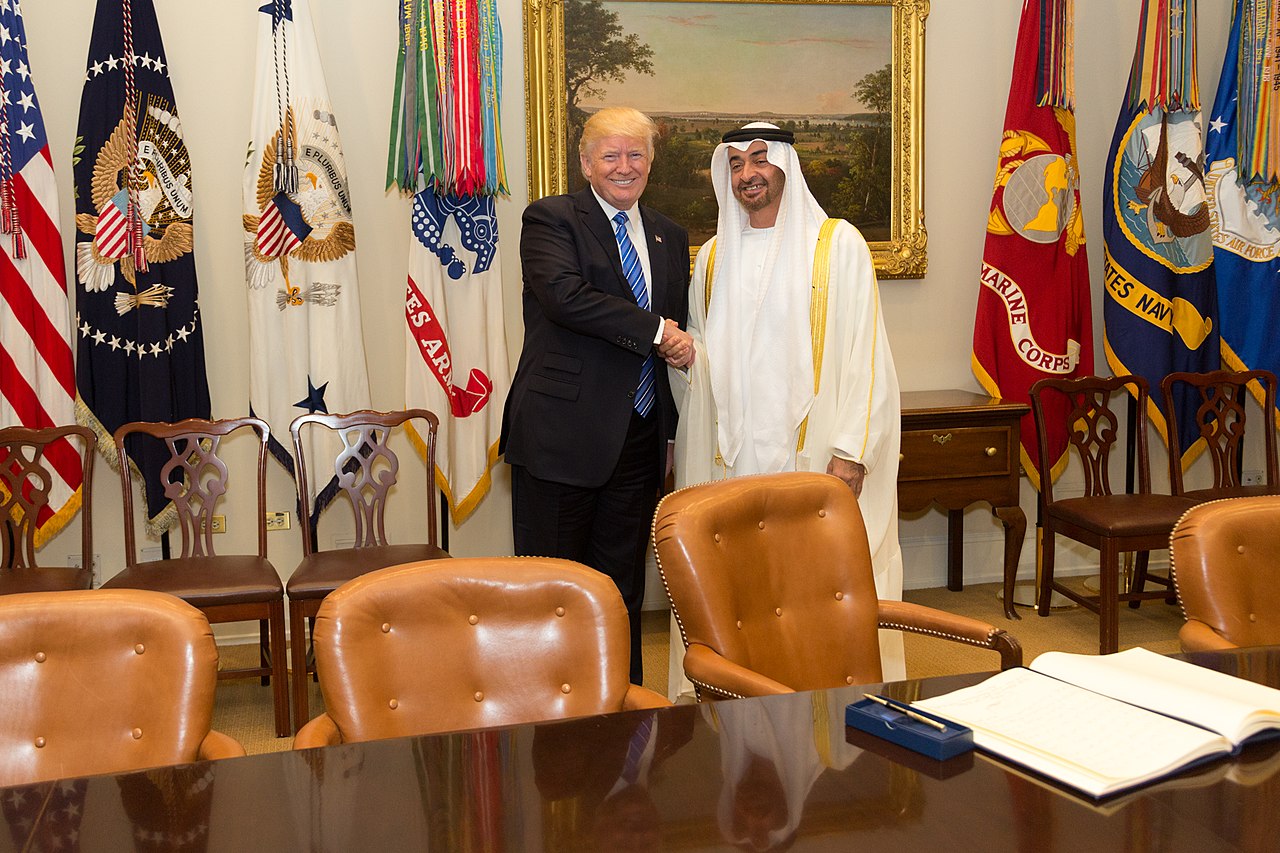 A security collaboration between Riyadh and Tehran is necessary for the long-term security of the Gulf. If President Trump is interested in establishing some sort of rapprochement with Iran and in avoiding another war in the greater Middle East, then this is his path toward a “Deal of the Century.”

As of this writing, President Trump seems to be using more severe sanctions as a response to the September 14 attack on two Saudi oil facilities, which he blames on Iran. It’s difficult to predict whether, in a few days, the President might reverse course and opt for a military action, as some of his hawkish advisers are advocating. If he decides to strike Iran, a war will engulf most of the region with untold misery and destruction.

Contrary to the belief that Trump and some of his advisers hold, the war will not be quick and surgical or end in a matter of days. Nor will Iran absorb the attacks without conducting devastating counterstrikes against its neighbors’ oil infrastructure and other strategic targets.

The Risks of War

Although the de facto Saudi ruler Mohammad bin Salman (MbS) is hellbent on fighting Iran to the last American, his country will not escape punishing attacks from Iran should war break out. The Kingdom’s oil, natural gas, and water infrastructure and other industrial parks could be destroyed. Saudi Arabia and its allies, including the United States, would be unable to wage a first strike attack that would disable Iran’s retaliatory capability and survivability and prevent it from striking back.

Other Gulf Cooperation Council (GCC) states see the potential devastation and hence are not as sanguine about striking Iran as their Saudi neighbor. Unlike MbS, Abu Dhabi Crown Prince Mohammad bin Zayed (MbZ) seems to be more realistic about the devastating impact of a military confrontation on Abu Dhabi and its sister emirates. Accordingly, he is much more interested in a diplomatic resolution of Saudi-Iranian tensions. Nor has he accepted the “Act of War” mantra that U.S. Secretary of State Mike Pompeo and his Saudi counterpart have been bellowing.

MbZ’s position is shared by Kuwait, Qatar, and Oman. Bahrain, effectively a Saudi vassal state, is in no position to oppose MbS. Although Israeli Prime Minister Benjamin Netanyahu has been a staunch supporter of MbS’s war drumbeat against Iran, Israel is currently in political turmoil, and Netanyahu’s political future is in limbo. MbS’s calls for military retaliation against Iran seem to go unheeded among his Arab brethren. Trump’s decision to deploy a few hundred U.S. troops to Saudi Arabia might give the Saudi crown prince some solace, but it does not necessarily put the United States on a war footing with Iran.

In a nutshell, no regional state, including Saudi Arabia and Israel—whose current leaders are the war’s most ardent supporters—will benefit, either in the short-term or long-term, from a war against Iran. The Gulf Arab emirates will suffer heavily, and their tribal families’ hold on power will become tenuous. In case of war, the presence of U.S. troops in the Gulf states will be unable to secure the future survival of their archaic tribal regimes.

Unlike in 1991, when American forces guaranteed the survival of the Kuwaiti and Saudi regimes following Saddam Hussein’s invasion of Kuwait, an all-out war with Iran will most likely spread across the Persian Gulf, the Levant, and other parts of the Middle East. In such a scenario, the survival of the tribal regimes becomes one of many side issues, and not necessarily a critical objective for outside warring parties. Sadly for these states, the “regime change” that some of them have sought for Iran may instead be visited upon them. If Gulf oil facilities go up in flames, family rule will teeter as the Arab monarchies’ economic bargaining power diminishes.

During the Iraq-Iran war in the 1980s, Gulf monarchies survived because of their support for Iraq against Iran. Once Washington decided in 1982 to help Saddam Hussein not lose the war, it became only a matter of time before Iran would capitulate. Gulf monarchies also survived the short Gulf War in early 1991. Saddam invaded Kuwait in August 1990 and was forced by a U.S.-led coalition to withdraw seven months later. That was a mini-war with limited objectives, which cannot possibly compare to a potential war with Iran. Even then, as the Iraqi army retreated from Kuwait, it was able to burn nearly 600 oil wells. Those fires burned for weeks, causing ecological, human, health, and economic disasters. A war with Iran could result in the burning of thousands of oil wells and installations in Iran and across the Arab littoral from Kuwait to Oman.

If Iran survives a Saudi-driven war successfully, despite U.S.-supplied fire power, Gulf populations will begin to wonder why their governments have been spending billions of dollars on sophisticated foreign weapon systems. They would pose several questions to their rulers: What is the value of these weapons? Shouldn’t the oil-rich Arab states spend their wealth instead on combating the rising poverty of their peoples?

A war with Iran will also be felt in several Levant countries, including Israel and Lebanon. In support of embattled Iran, the pro-Iranian Lebanese Shia political party Hezbollah will enter the war by launching missiles, rockets, and drones against Israeli towns, cities, and installations in northern Israel. Hezbollah’s missiles could cause considerable damage as far south as Haifa and the industrial complexes in the Akko-Haifa region. It’s also not unthinkable for Iran to launch medium-range missiles against Israeli targets in the heavily populated center of the country.

Although Israel has the capability to face a two-front attack, Israel’s population will be rattled by the ensuing chaos, especially if the attacks cause a high number of casualties. Israel escaped getting involved in previous Gulf wars, but will most likely not this time around.

Lebanon, Jordan, and Iraq will also get caught in a regional war with Iran. Lebanon’s national politics is already precarious, with Hezbollah being the most influential political group in the country. Jordan’s internal stability will be threatened as well with the arrival of more refugees and the rising tide of protests against poor economic policies and systemic corruption inside the Hashemite monarchy. Iraq could easily be used as a proxy territory, possibly by the Iranians, the U.S., and the remnants of the Islamic State and al-Qaeda.

The recent Arab Barometer survey of Arab youth shows that majorities have favorable views of China, including in terms of economic relations. Less than half hold similar views of the United States. If a war with Iran results in no clear victory for the American-Saudi side or in a stalemate, Arab youth views toward their regimes and the United States will sour considerably. In this scenario, the United States would have supported Gulf autocratic regime but lost Arab publics—a sad eulogy for Washington’s efforts since 9/11 to win the hearts and minds of Arab and Muslim peoples.

These unpleasant Arab and non-Arab regional realities will be the backdrop of an all-out war against Iran. And the more complex they are, the more dangerous and chaotic the unintended consequences will be. It’s much easier to go to war than to face the morning after questions and consequences. We experienced that during the Iraq War. Have those who are pushing for a war against Iran learned any lessons from that conflict?

The Arab Middle East is not in a good place—politically and economically. Arab peoples are mostly young, restless, poor, disenfranchised, and alienated from their governments. According to the Arab Barometer report, roughly 30 percent of the 350 million Arabs are between 15 and 29. As a result of high unemployment and poverty, there is widespread discontent among the youth about their economic prospects. Street demonstrations against regime economic policies are occurring almost daily across the region.

Despite the pervasive security state in Egypt, for example, demonstrations against the corruption of Abdel Fattah al-Sisi’s regime continue unabated. They have spread from Cairo to other Egyptian cities. Youth demonstrations of various sizes are a regular occurrence across the region, from Sudan to North Africa and the Levant. Dissatisfaction with economic and political conditions is prevalent across the region. Hopelessness and economic bleakness are driving large numbers of Arab youth to emigrate.

These socio-economic drivers are not religious or ideological. They are economic and political in nature. While many youth have come to tolerate the oppressive nature of state securitization across the region, they have become more vocal against corruption of their individual regimes, whether in Egypt, Jordan, Bahrain, Morocco, or Algeria.

If President Trump sticks with his instincts against waging yet another war in the greater Middle East, deal making becomes the only clear path forward. To attain this goal, it’s imperative that Washington revisit the 2015 nuclear deal (Joint Comprehensive Plan of Action or JCPOA) with Iran and the other signatories. Trump’s economic sanctions have hurt Iran’s economy considerably, and Tehran may be willing to reopen negotiations on extending the breakout time and other conditions specified in the JCPOA.

A second avenue to facilitate the making of a deal with Iran would be a concerted effort to convince the Saudis to end the war in Yemen. The political and power sharing demands of the Houthis and the pro-Saudi factions in that war-torn country are achievable. A proxy war cannot and must not go on forever. MbS should be persuaded that his Yemen war is unwinnable in the long-run, especially as more and more U.S. Members of Congress persist in questioning the continued U.S. military support for the Saudis there.

A security collaboration between Riyadh and Tehran is necessary for the long-term security of the Gulf. The United States, back in the 1950s, realized that Gulf security could only be attained through a partnership between Iran and Saudi Arabia. The geographic realities of that region haven’t changed much since then. The Arab and Persian littorals of the Persian Gulf must find a way to secure the Gulf. If President Trump is interested in establishing some sort of rapprochement with Iran and in avoiding another war in the greater Middle East, then this is his path toward a “Deal of the Century.”