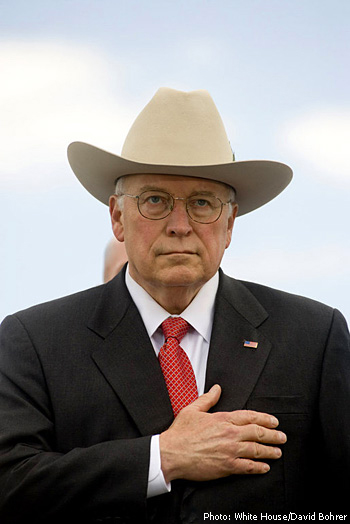 Pentagon officials firmly opposed a proposal by Vice President Dick Cheney last summer for airstrikes against Iranian Revolutionary Guard Corps (IRGC) bases by insisting that the administration would have to make clear decisions about how far the United States would go in escalating the conflict with Iran, according to a former George W. Bush administration official.

J. Scott Carpenter, who was then deputy assistant secretary of state in the State Department’s Bureau of Near Eastern Affairs, recalled in an interview that senior Department of Defense (DOD) officials and the Joint Chiefs used the escalation issue as the main argument against the Cheney proposal.

According to Carpenter, who is now at the Washington Institute on Near East Policy, a strongly pro-Israel think tank, Pentagon officials argued that no decision should be made about the limited airstrike on Iran without a thorough discussion of the sequence of events that would follow an Iranian retaliation for such an attack. Carpenter said the DOD officials insisted that the Bush administration had to make "a policy decision about how far the administration would go—what would happen after the Iranians would go after our folks."

The question of escalation posed by DOD officials involved not only the potential of the Mahdi Army in Iraq to attack, Carpenter said, but also possible responses from Hezbollah and from Iran itself across the Middle East.

Carpenter suggested that DOD officials were shifting the debate on a limited strike from the Iraq-based rationale, which they were not contesting, to the much bigger issue of the threat of escalation to full-scale war with Iran, knowing that it would be politically easier to thwart the proposal on that basis.

The former State Department official said the DOD "knew that it would be difficult to get interagency consensus on that question."

The Joint Chiefs were fully supportive of the position taken by Secretary of Defense Robert Gates on the Cheney proposal, according to Carpenter. "It’s clear that the military leadership was being very conservative on this issue," he said.

Former Bush speechwriter and senior policy advisor Michael Gerson, who left the administration in 2006, wrote a column in the July 20, 2007 edition of the Washington Post in which he gave no hint of Cheney’s proposal but referred to "options" for striking Iranian targets based on the Cheney line that Iran "smuggles in the advanced explosive devices that kill and maim American soldiers."

Gerson cited two possibilities: "Engaging in hot pursuit against weapon supply lines over the Iranian border or striking explosives factories and staging areas within Iran." But the Pentagon and the military leadership were opposing such options, he reported, because of the fear that Iran has "escalation dominance" in its conflict with the United States.

That meant, according to Gerson that, "in a broadened conflict, the Iranians could complicate our lives in Iraq and the region more than we complicate theirs."

Carpenter’s account of the Pentagon’s position on the Cheney proposal suggests, however, that civilian and military opponents were saying that Iran’s ability to escalate posed the question of whether the United States was going to go to a full-scale air war against Iran.

The option of attacking nuclear sites had been raised by President George W. Bush with the Joint Chiefs at a meeting in "the tank" at the Pentagon on December 13, 2006, and had been opposed by the Joint Chiefs, according a report by Time magazine’s Joe Klein last June. After he become head of the Central Command in March 2007, Adm. William Fallon also made his opposition to such a massive attack on Iran known to the White House, according Middle East specialist Hillary Mann, who had developed close working relationships with Pentagon officials when she worked on the National Security Council staff.

It appeared in early 2007, therefore, that a strike against Iran’s nuclear program and military power had been blocked by opposition from the Pentagon. Cheney’s proposal for an attack on IRGC bases in June 2007, tied to the alleged Iranian role in providing both weapons—especially the highly lethal explosively formed projectiles (EFPs)—and training to Shiite militias, appears to have been a strategy for getting around the firm resistance of military leaders to such an unprovoked attack.

Although the Pentagon bottled up the Cheney proposal in interagency discussions, Cheney had a strategic asset that he could use to try to overcome that obstacle: his alliance with Gen. David Petraeus.

As the Inter Press Service reported last week, Cheney had already used Gen. David Petraeus’ takeover as the top commander of U.S. forces in Iraq in early February 2007 to do an end run about the Washington national security bureaucracy to establish the propaganda line that Iran was manufacturing EFPs and shipping them to the Mahdi Army militiamen.

Petraeus was also a supporter of Cheney’s proposal for striking IRGC targets in Iran, going so far as to hint in an interview with Fox News last September that he had passed on to the White House his desire to do something about alleged Iranian assistance to Shiites that would require U.S. forces beyond his control.

At that point, Admiral Fallon was in a position to deter any effort to go around DOD and military opposition to such a strike because he controlled all military access to the region as a whole. But Fallon’s forced resignation in March and the subsequent nomination of Petraeus to become chief of Central Command later this year gives Cheney a possible option to ignore the position of his opponents in Washington in the final months of the administration.

Gareth Porter is an investigative historian and journalist specializing in U.S. national security policy. The paperback edition of his latest book, Perils of Dominance: Imbalance of Power and the Road to War in Vietnam, was published in 2006.