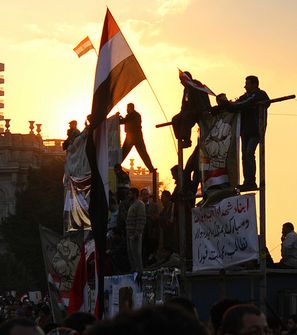 As if out of nowhere, hundreds of thousands of protestors took to the streets, fueled by poverty, hunger, and anger at their repressive autocratic government. Though the regime was hailed as a beacon of stability in an otherwise volatile region, its collapse was as unexpected as it was rapid. The police quickly lost control, the military refused to fire on protestors, and within the scope of a few days the old order came crashing down. The West, while outwardly supportive of the people’s democratic aspirations, worried about the loss of a stable Middle East ally which had developed historic military and intelligence coordination with Israel.

The description above could serve as an account of events leading up to the overthrow of Egyptian strongman Hosni Mubarak. However, it also tells the story of the great Iranian uprising. Not the 1979 revolution that ushered in Ayatollah Khomeini and his cohorts—the feared replay of which has caused much handwringing among some neoconservatives and their Likud counterparts—but rather its 1951 precursor, which ended in 1953 with a U.S.- and UK-backed coup to restore “stability” to the region. In many ways, the West’s uncompromising prioritization of its strategic interests over its stated guiding principles was directly responsible for the later outgrowth of a virulently anti-American political philosophy in Iran. Though Egypt’s revolution may not resemble Iran’s in 1979, the way the U.S. responds to the ousting of an unpopular—but western-friendly—dictator could go a long way towards creating the conditions for a similar outcome.

The Legacy of Mossadeq

Though largely forgotten in the West, the CIA-orchestrated coup that ousted democratically elected Iranian Prime Minister Mohammed Mossadeq is ingrained in the collective consciousness of the Middle East. Back in the early 1950s, the Iranian public had grown weary of their stagnant economy, rising unemployment, and most of all, the painfully imbalanced oil concessions that siphoned much-needed public money into foreign hands. Previous attempts to address the issue, even entreaties by the Shah himself, were rebuked by the British. Frustrated by their powerlessness, Iranians rallied behind an emerging leader who promised to address the issue by nationalizing the country’s oil resources. His successful election and appointment as prime minister worried Iran’s western allies, who feared that his nationalist populism would not conform to their strategic regional objectives.

Almost immediately, the U.S. establishment went into propaganda overdrive. Analysts and press outlets warned of Soviet ties to the new “radical” government under Mossadeq, whom they accused of harboring secret “communist leanings.”[1] Galvanizing U.S. fear of Soviet encirclement, politicians and diplomats warned that the new government, though democratically elected, would almost certainly evolve into a Soviet satellite. This fear-mongering campaign culminating with John Foster Dulles’s warning President Eisenhower that “a communist takeover is becoming more and more of a possibility.”[2] Spurred by a perceived need to counter radicalism and secure regional stability, Eisenhower gave the go-ahead for Operation Ajax which—through a combination of bribes, blackmail, and staged protests—set the stage for a coup to oust Iran’s democratically elected president and return the Shah to power.[3]

In retrospect, Mossadeq now appears to have been little more than a “progressive liberal.” But fogged by the fear and paranoia of the time, the U.S. government chose to handle him as an existential threat to U.S. regional influence. The United States has been paying for this mistake ever since, as scholars on Iran almost unanimously agree that the interference and subsequent dismantling of Iran’s democratically elected government played a significant role in the widespread anti-Americanism that later characterized the 1979 revolution. Unless the Obama administration is very careful, the United States may very well make the same mistakes again in Egypt. And like 1953, there may be no second chances for decades to come.

Though the Obama administration’s outward handling of the Egyptian uprising bears little resemblance to the subversion of Operation Ajax, Egyptians by and large have viewed the U.S. position with skepticism. And for good reason. Initially lukewarm to the very idea of protests, Obama and his team begrudgingly evolved from uttering statements supporting “our friend” Mubarak, to calls for “reform,” to vague requests for an eventual transition.[4] In a pattern similar to his response to Tunisia, Obama explicitly refrained from celebrating the people’s uprising until they had already won. For many observers both in and outside Egypt, U.S. policymakers appeared to be hedging their bets, staying on good terms with Mubarak in case he weathered the storm while refraining from the type of overt statements of regime support emanating from Riyadh and Tel Aviv. Reports from practically all news sources—including the New York Times,[5] the Washington Post,[6] and the BBC[7]—highlighted Washington’s schizophrenic posturing.

A significant part of the seeming confusion within the Obama administration came from the diverging viewpoints within the Washington establishment, with many hardliners echoing a similar refrain from the days of Operation Ajax.[8] “Experts” and analysts sounded the alarm on the grave dangers that lurked behind the democratic aspirations of the Egyptian people. They no longer warned about communism as in the days of the Cold War. Instead, in line with the fears of the day, they raised the specter of violent Islamism. “Mubarak is bad,” Ali Alfoneh wrote for an American Enterprise Institute briefing, “but those who will replace Mubarak will be worse.”[9] Robert Satloff of the Washington Institute for Near East Policy expressed his concern that “this hopeful moment … may give way to a darker era.”[10] Lila Gilbert of the Hudson Institute warned that the loss of Mubarak would create an “uncertain future” for Egypt’s Christian community.[11] James Phillips at the Heritage Foundation warned of plans to “transform Egypt into an Islamic state that is hostile to freedom.”[12]

Unfortunately, this patronizing assessment of Egyptian domestic politics did not only come from the right. Chris Matthews declared he was “ashamed as an American” for putting pressure on Mubarak, whom he referred to as “the George Washington of peace over there.”[13]

The Muslim Brotherhood has been the target of much of this fear-mongering. According to its many detractors in the West, the group is simply a Taliban-in-waiting, hoping to use its electoral strength to destroy democracy in the interests of instituting sharia law. Clifford May of the Foundation for the Defense of Democracies ominously asked, “Do the Egyptians demonstrating in Tahrir Square appreciate how threatening the Muslim Brotherhood is to the freedom they hope to win?”[14]

In reality, contrary to being the monolithic menacing organization depicted in western media, the brotherhood is actually a loose coalition of groups with widely divergent political and religious goals. The Muslim Brotherhood renounced violence in 1928 and explicitly endorsed democracy as its ideal political system.[15] It is probably better known in the Arab world for its compromises with Arab dictators than its attempts to undermine them. There are few objective indications that the Muslim Brotherhood is predisposed to violent fundamentalism. In addition, the brotherhood has received lavish financing and support in past years from the United States[16] and the United Kingdom,[17] and it continues to enjoy U.S. support as part of the March 14 Alliance in Lebanon. And yet, elements of western discourse remain saturated with depictions of the Muslim Brotherhood as violent, disingenuous, secretive, and sinister.

The future role of the Muslim Brotherhood in Egyptian politics belongs to the Egyptian people and no one else. Forcing them to decide otherwise, particularly at this early stage in the nation’s transformation, would compromise their freedom of choice as well as the democratic values that the United States ostensibly advocates.

Evidence suggests that the political leanings of the Egyptian demonstrators were solidly secular. Any objective on-the-ground analysis in Egypt would doubtless confirm that the Muslim Brotherhood did not control the pace or direction of events. Their initial refusal to take part in the demonstrations, their minimal impact once they did participate, and the largely secular nature of the protestors all point to a very different political trajectory in Egypt’s future. As’ad Abou-Khalil, a professor and well-respected political blogger, breaks down the demographics into the following categories: “15 percent Muslim Brotherhood, 5 percent various Arab nationalist and progressive parties, and 80 percent who belong to no parties at all.”[18] Hardly a resounding endorsement of the brotherhood.

Why then all the handwringing? Perhaps, as some have speculated, the specter of the brotherhood is merely a way to arouse fear and suspicion in order to maintain—as in the case of Mossadeq in 1953—sufficient influence and control to ensure the fulfillment of western strategic interests.[19] As the events in Iran demonstrated, such short-term thinking is almost certain to backfire in the long run.

Had U.S. policymakers earnestly respected the aspirations behind the uprising, they would have been more vocal in their support for the demonstrators, rather than uttering weak endorsements for “stability “and “adherence to international commitments” (aka the Camp David Accords). Ironically, the fear of the brotherhood has led U.S. policymakers to state that the best way to safeguard the democratic aspirations of the Egyptian people is to delay elections and consolidate state control within the military. Considering that such a position involves shuffling players but leaving the status quo intact, it is unlikely to find much traction with the Egyptian public.

Worse, the hypocrisy of supporting democracy within narrowly-defined terms and conditions undermines the legitimacy of U.S. foreign policy in the entire region. As nearby countries erupt in a similar fashion, Washington’s encouragement of Iranian protesters is drowned out by their silence on similar events in Bahrain, Yemen, Jordan, and Algeria. In a recent press briefing, Assistant Secretary of State P.J. Crowley was asked why the United States was supporting demonstrations in Iran but not elsewhere. His disingenuous response: “Well, actually, in the other countries there is greater respect for the rights of the citizens.”[20]

Perhaps the greatest irony of the U.S. response to the Egyptian uprising can be found in Obama’s recent acknowledgement of the U.S. government’s errors in 1950s Iran. In his Cairo speech, for the first time a president explicitly acknowledged that “the United States played a role in the overthrow of a democratically elected Iranian government” and pledged a new beginning in relations with the Muslim world. The American Enterprise Institute followed up by admitting that Mossadeq was little more than a “secular nationalist,” and WINEP conceded they may have been “on the wrong side of history.”[21] With the conflated threat of nationalist populism fading from the U.S. collective establishment’s imagination, so too was the once solid justification for interference in Iran’s political structure. Presented with a déjà-vu, the United States still can’t seem to get it right.

Indeed, although many in the Obama administration were sympathetic to the Egyptian cries for liberation, their cautious approach produced a backwards response. They remained tepid as nonviolent protestors were beaten and killed. They appeared complacent about the ascension of decidedly anti-democratic figures such as Umar Suleiman and Hussein Tantawi.

Egyptians have also resented western support for members of Mubarak’s administration in the transition government, which includes old guard figures such as Tantawi, Imad Al-Din Adib, and Ahmad Abu Al-Ghayt. As Wael Ghonim, the now-famous Google executive arrested for helping plan the initial demonstrations, has written: “Dear Western Governments, You’ve been silent for 30 years supporting the regime that was oppressing us. Please don’t get involved now.”[22]

Despite arguments from figures like Elliott Abramsthat the revolution is narrowly focused on domestic policy,[23] it would be naïve to assume that Egyptians are not watching U.S. reactions very closely. The sheer volume of protestors calling Mubarak an agent of the Americans and of Israel reaffirms that U.S. actions in Egypt will have consequences for decades to come. If conservative pundits are so worried about a reply of Iran 1979 and liberal Democrats are keen to avoid another Mossadeg-like disaster, then both factions need to stop promoting the same failed policies that produced those results.