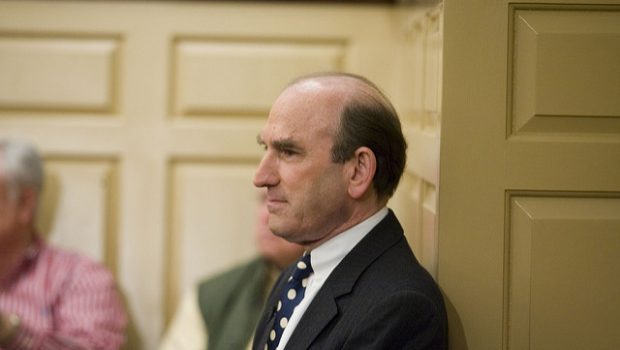 The growing anticipation that President Donald Trump will name Elliott Abrams deputy secretary of state under Rex Tillerson has observers from across the political landscape scratching their heads—and in some cases fuming. An opponent of Trump during the presidential race, Abrams is a deeply divisive figure with a notorious political history and views that contrast sharply with those of other leading figures in the new foreign policy establishment.

There is a widespread tendency to label Abrams a “respected” foreign policy analyst. Everyone from the mainstream media like CNN to liberal blogs like Talking Points Memo have used this term in describing him. Although a knowledgeable and capable operator, Abrams is better known for being convicted on charges of withholding information from Congress about the Iran-Contra scandal, smearing those with whom he disagrees with charges of anti-Semitism, and defending perpetrators of mass human rights violations, including in particular people accused of genocide in the Central American conflicts of the 1980s.

Currently a senior fellow at the Council on Foreign Relations, Abrams has been closely associated with neoconservative foreign policy advocacy for more than three decades, including the campaign to push war in Iraq even before the 9/11 terrorist attacks. He’s the son-in-law (through his spouse Rachel Abrams who passed away in 2013) of former Commentary editor Norman Podhoretz and writer Midge Decter, the trailblazing couple who helped shape neoconservatism in the 1970s. Abrams has also worked with a large number of neoconservative groups, including the Project for the New American Century, the Center for Security Policy, the Hudson Institute, and the Ethics and Public Policy Center, where he served as president for several years.

Abrams was indicted by a special prosecutor for deceiving Congress about the Reagan administration’s role in supporting the Contras—including his own role in the Iran-Contra arms deal, which involved the sale of weapons from Israel to Iran in exchange for Iran helping broker the release of Americans held hostage by Hezbollah. Some of the money made from the sale was channeled to the U.S.-backed and -organized Contras in Nicaragua in violation of a congressional prohibition.

At the time of his involvement, Abrams was the assistant secretary of state for inter-American affairs, working under George Shultz. Abrams pleaded guilty to two lesser offenses (including withholding information from Congress) to avoid a trial and a possible jail term. Throughout the proceedings, Abrams denied knowledge of the NSC and CIA programs to support the Contras. He blamed Congress for the deaths of two U.S. military members shot down by the Sandinistas in an illegal, clandestine arms supply operation over Nicaragua. He described the legal proceedings against him as “Kafkaesque” and called his prosecutors “filthy bastards” and “vipers.”

Abrams was notorious for his efforts to support dictators and mass murderers in the Central American wars of the 1980s, including notably Guatemala’s Gen. Efraín Ríos Montt, who was indicted for acts of genocide committed during his bloody rule in the early 1980s. During the height of the genocide, Abrams was serving as assistant secretary of defense for human rights. According to one account, as the killing continued apace in Guatemala he insisted that “the amount of killing of innocent civilians is being reduced step by step” and pressed Congress to reward the regime by giving it advanced weapons.

Abrams has also been unapologetic about U.S.-abetted humanitarian crises elsewhere, including in El Salvador, as documented by historian Philip H. Burch: “A few years after he stepped down as assistant secretary of state for Inter-American Affairs, Abrams, once the State Department’s top human rights official, wrote an article on El Salvador in the National Review titled ‘An American Victory’; at the end of this piece he proudly proclaimed that ‘El Salvador’s decade of guerrilla war cost thousands of Salvadoran lives, and those of eight Americans. … In this small corner of the Cold War, American policy was right, and it was successful.’”

President George H.W. Bush pardoned Abrams and five other Iran-Contra figures in 1992, shortly before leaving office. Abrams later served in a number of posts in the George W. Bush administration, including as an adviser on human rights and on Mideast policy at the National Security Council, where he was a key advocate for an aggressive “war on terror” after 9/11 and a stronger backer of a one-sided take on Israeli affairs.

In this capacity Abrams played a role in several controversial U.S. actions in the Middle East. A report by Vanity Affair revealed how in 2006, Abrams, together with President Bush and Condoleezza Rice, helped ignite a civil war in Gaza that ultimately strengthened the position of Hamas. Dubbed “Iran-Contra 2.0,” the plan was to provide weapons to Fatah strongman Muhammad Dahlan to enable him to oust the democratically elected Hamas-led government. As Vanity Fair reported, “Instead of driving its enemies out of power, the U.S.-backed Fatah fighters inadvertently provoked Hamas to seize total control of Gaza.”

In 2006, Abrams played a role in shaping the U.S. response to the summer war between Israel and Hezbollah. The New York Times noted that Secretary of State Rice was accompanied on her mediating trips in the Middle East “by two men with very different outlooks on the conflict”—namely, Abrams and the State Department’s C. David Welch. According to the Times, “Abrams, a neoconservative with strong ties to [Vice President Dick] Cheney, has pushed the administration to throw its support behind Israel. During Ms. Rice’s travels, he kept in direct contact with Mr. Cheney’s office.”

According to an unnamed U.S. government consultant “with close ties to Israel” interviewed by Seymour Hersh, Israel had put together bombing plans long before Hezbollah kidnapped two Israeli soldiers, which set off the conflict. As they developed their plans, according to the consultant, Israeli officials went to Washington “to get a green light for the bombing operation and to find out how much the United States would bear…. Israel began with Cheney. It wanted to be sure that it had his support and the support of his office and the Middle East desk of the National Security Council.”

Although an NSC spokesman who talked with Hersh denied that Abrams had any role in supporting Israel’s plan, a second unnamed U.S. official, a former intelligence officer, claimed, “We told Israel, ‘Look, if you guys have to go, we’re behind you all the way. But we think it should be sooner rather than later—the longer you wait, the less time we have to evaluate and plan for Iran before Bush gets out of office.’”

Neocon at the Council on Foreign Relations

In the intervening years before Trump, Abrams has held a number of posts, including at the Council on Foreign Relations (CFR). In his CFR blog “Pressure Points” Abrams comments on a variety of U.S. foreign policy issues and discusses political problems in the Middle East, often with a view to encouraging U.S. intervention, promoting a right-wing Israel-centric agenda, and launching rhetorical broadsides against regimes he does not favor.

Abrams is frequently called out for maintaining double standards in his political arguments, in particular as he seeks to promote a grand Israeli coalition with Sunni Arab leaders, who Abrams writesshould look to Israel as “an ally against the jihadis and against Iran.”

A case in point was his response to the dispute between Iran and Saudi Arabia that erupted in early 2016 after the Saudi regime executed the high-profile Shiite cleric and political dissident Sheik Nimr Baqr al-Nimr. When a group of protestors attacked the Saudi embassy in Tehran, Abrams used the occasion to denounce Iran as well as the Iran nuclear deal. He wrote that the incident was “another piece of evidence that Iran refuses to live by the rules of civilized diplomatic practice, and that its behavior has gotten worse not better since the signing of the nuclear deal.” One observer remarked on how “the sacking of Riyadh’s embassy in Tehran, rather than Nimr’s execution, was of great concern for Abrams.”

Push and Pull with Trump

During the 2016 presidential race, Abrams was more equivocal in his opposition to Trump than other neoconservative figures. He did, however, initially support other candidates in the GOP primary and was selected by Sen. Ted Cruz to be a member of his campaign’s national security team. In a May 2016 article for the Weekly Standard titled “When You Can’t Stand Your Candidate,” Abrams urged readers not to “allow the Republican convention to be a coronation wherein Trump and Trumpism are unchallenged.”

Abrams has also unabashedly used accusations of anti-Semitism to smear people he disagrees with over Middle East policy, including patently non-anti-Semitic figures like former Defense Secretary Chuck Hagel. Abrams thus appears an unlikely member of an administration whose chief policy adviser—Steve Bannon—identifies his former publication Breitbart News as “the platform for the alt right,” a rightwing movement closely associated with white supremacists.

Abrams is likely to use his new post at State to press a hardline on Iran, which he repeatedly pushed during the 2016 presidential campaign. He wrote in Newsweek:

The new president will want to think about possible Iranian responses and how to blunt them as well. And [candidate Jeb Bush] is right in saying that we need a comprehensive Iran strategy—something the Obama administration has lacked. Reversing the Joint Comprehensive Plan of Action (JCPOA), as the Iran deal is formally known, is only part of that.

When news began to spread about Abrams’s likely appointment, among those decrying the news were various conservative groups and individuals, including the libertarian Cato Institute, which called it “baffling.” Wringing his hands about “hundreds” of neocons “scurrying” into the administration if Abrams is admitted, Republican Sen. Rand Paul said that he voted to confirm Tillerson because he appeared to have a “realist approach” while Abrams didn’t espouse “any type of foreign policy realism.”

Ultimately, it may be Trump’s proposed wall along the U.S.-Mexico border that best symbolizes the inglorious connection between Trump’s and Abrams’s worldviews. After all, many of the men, women, and children who have sought to cross that border in recent years have fled desperate social conditions that exist in no small part because of the wars in Central America supported by Abrams and his colleagues three decades ago.