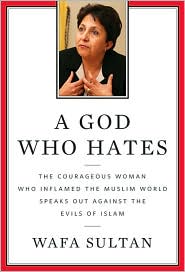 There is a tendency among right-wing think tanks in the United States involved in Middle East policy to employ “experts” from the region to bolster their pro-war advocacy campaigns. One of the more infamous cases is that of Ahmad Chalabi, the darling of the neocon crowd during the lead up to the invasion of Iraq who, after his return to Iraq, leveraged his wealth and connections to become a major political figure there, often to the embarrassment of his erstwhile comrades.

More recently, there has emerged a cadre of high-profile individuals from the Greater Middle East who, unlike Chalabi, have turned against Islam and embraced their lives in the West. In doing so, they have adopted views strikingly similar to some of the more hawkish factions in U.S. politics. Notable examples include Ayaan Hirsi Ali, Wafa Sultan, and Nonie Darwish, all known for their vociferous condemnations of Islam, their affiliations with prominent neoconservative organizations, and the anger they have aroused from both Arabs and Muslims worldwide. Though the research and analysis produced by these self-styled “apostates of Islam” often has limited scholarly value, they have played an important role in providing a purportedly moral justification for Western military campaigns in Muslim countries.

Adopting the Clash of Civilizations

The background of many of theses apostates, including the three mentioned above, follow a common pattern. As natives of Arab or Muslim countries, they have each experienced pivotal events that shaped their perspectives on their countries of origin and religion. Ayaan Hirsi Ali, a Somali emigrant who once served in the Dutch House of Representatives and now works as a fellow at the American Enterprise Institute[1], was raised in war-torn Somalia, where she was subjected to the appalling practice of female genital mutilation. Wafa Sultan, the Syrian-American author of A God Who Hates: The Courageous Woman Who Inflamed the Muslim World Speaks Out Against the Evils of Islam, grew up in Syria where, in her words, “the tentacles of the Saudi octopus” had nurtured religious fanatics who murdered her university professor.[2] For Nonie Darwish, the Egyptian-American founder of Arabs for Israel, it was the death of her father, killed by an Israeli parcel bomb while organizing Palestinian resistance in Gaza, and the pressure put upon her to take revenge. [3]

These traumatic experiences helped convince these women that Islam was immoral and dangerous. They abandoned what they perceived to be a “backward culture” in favor of the “enlightened values” of the West. Hirsi Ali abandoned religion altogether. Darwish converted to Christianity. And Sultan asserts that “I even don’t believe in Islam, but I am a Muslim.”[4]

These “crusaders against Islam” are also often characterized by a Manichean worldview pitting the West against Islam. They tend to broadly portray Islam as a homogenous system of highly conformed practice, wherein singular experiences can be extrapolated to explain the broader culture. All three borrow language from Samuel Huntington’s clash of civilizations thesis to depict the collision between these “opposing forces.” Sultan has stated that “the clash we are witnessing around the world is … a clash between freedom and oppression.”[5] Hirsli Ali describes “the clash of values between the tribal culture of Islam and Western modernity.”[6] And Darwish refers to Islam as “an attack on civilization itself by haters of civilization.”[7]

These apostates also frequently adopt a certain presumptuous arrogance in their statements about Islam and its adherents that non-Muslim westerners would likely find difficult to pull off. Hirsi Ali, for example, has spoken repeatedly of “the tragedy of the tribal Muslim man” who has fallen prey to “the grip of jihad,” claiming that “the only difference between my relatives and me is that I opened my mind.”[8] Sultan has claimed that the Crusades were simply the logical reaction to “Islamic religious teachings.” And Darwish has frequently spoken of the “culture of death” in the Middle East.[9]

Adopted by the Right

The hawkish right in the United States has heavily promoted the writings of these women, who have subsequently joined the ranks of neoconservative organizations like the American Enterprise Institute, the Center for Security Policy, and the Middle East Media Research Institute. Unsurprisingly, these groups share many of the views of their new pundits: an unapologetic defense of all things “western,” a perceived moral duty to protect the civilized West against Islam, and a willingness to use all means necessary to achieve this objective. Commenting on this pattern, Salon.com’s Glenn Greenwald has pointed out that those keenest to “help” the oppressed people of the Middle East are also those most eager to bomb countries in the region.[10]

These apostate Muslims and their neocon colleagues have developed tight, symbiotic relationships. Rightwing institutions provide platforms and legitimacy, allowing otherwise little known individuals to rise to positions of international prominence. None of these so-called experts have produced serious scholarship or careful analysis of actual political effects, aside from personal or anecdotal experience. And their main value, at least in terms of political discourse in the United States, appears to be that, as former insiders, they can provide a sheen of legitimacy to the Islamophobic tendencies of their rightwing supporters.

A similar phenomenon can be seen with the growing prominence of Western-born Muslims who, although not apostates, promote hawkish U.S. policies toward the Middle East. One such figure is Zuhdi Jasser, a Wisconsin-born practicing Muslim who is a member of the neocon-led Committee on the Present Danger (CPD) and founder of the group American Islamic Forum for Democracy. Jasser is quoted on the CPD website, saying: “Only freedom-loving devotional American Muslims can lead an effective counter-jihad from within the Muslim community. The future of American liberty and the free world as we know it depends upon the moral courage of anti-Islamist Muslims.”[11]

The views expressed by these apostates tend to bolster some of the more hawkish U.S. Mideast policies. For example, Hirsi Ali’s August 2010 article in the Wall Street Journal, entitled “How to Win the Clash of Civilizations,” advocated a “divide-and-rule” strategy to protect “our civilization” from destruction. She goes on to praise “The greatest advantage of Huntington's civilizational model of international relations … [is that] it reflects the world as it is—not as we wish it to be. It allows us to distinguish friends from enemies.”[12] In earlier article, she called for a continued military presence in Iraq and Afghanistan, implying that any withdrawal would have “jihadis dancing in jubilation.”[13]

Nonie Darwish has railed against the willingness of Western countries to “appease … and assimilate” Muslims, since “all mosques have an anti-American and an anti-peace message” based in a “culture of jihad, tribalism and terror.”[14]

Even more alarmingly, Wafa Sultan has publicly stated that “1.3 billion Muslims … have to realize they have only two choices: to change or to be crushed,” implying that the “pressure” may have to take the form of “atom bombs.”[15]

Comments like these are given more weight because of the identities of the sources. By vilifying the aspirations of the societies they’ve left behind, their discourse takes on an air of “truth to power,” safe from charges of neo-colonialism or western exceptionalism. Their hyperbolic pronouncements have consistently been used to buttress conservative arguments for war by creating a pretense that “people from the region” support such actions. Publications advocating tougher, more aggressive policies in the “war on terror” often rely on narratives provided by these figures, in ways reminiscent of Chalabi’s “intelligence” on Saddam Hussein’s Iraq and Amir Abbas Fakhravar’s claims of impending Iranian collapse.[16]

There is a certain paradox in the effort to rely on indigenous opinions to justify policies, while ignoring the overwhelming condemnation of such perspectives by the vast majority of the indigenous people themselves. And yet, these figures are repeatedly held up to mirror and confirm the predetermined opinions of war-hungry organizations eager to validate their destructive agendas.

The New Face of Orientalism

Early this year, David Frum, a speechwriter for President George W. Bush who famously coined the “Axis of Evil” phrase, hosted a posh gathering in northwest Washington D.C. to honor Ayaan Hirsi Ali for her “strength,” “courage,” and “intelligence.”[17] Though attendees were limited for “security reasons,” Hirsi Ali was surrounded by fellow neocons, discussing topics from the “liberation of Iran” to the “religious extremism” behind the Gaza flotilla.[18] The respect afforded by militarist ideologues to Hirsi Ali and her compatriots is palpable, based almost solely on the ability of these figures to validate simplistic perceptions of the Muslim world as violent, backward, and dangerous.

Just as diehard Cold Warriors viewed all socialist countries as a single, threatening entity, these apostates and their rightwing supporters have reified the Islamic world into an undifferentiated mass. They conveniently lump the disparate strains of Islam, the competing visions of Muslim identity, and the blurred and fluid boundaries of the Middle East, into a single—and threatening—unit. But in reality, the “Muslim world,” if such an entity can be said to exist, would encompass not only the Deobandis of Pakistan and the Wahhabis of the Gulf, but also Sufi mystics in Konya, Druzes in Lebanon, Shafi’i in Indonesia, and countless others.

Additionally, this monolithic view leaves little room for positive developments, such as the creation of democratic institutions in 23 Muslim countries. And it seems to have blinded these apostates to the injustices that have resulted from U.S. military interventions.[19] This view also fails to account for the many actors and organizations throughout the Greater Middle East who may disagree with Western policies for reasons not derived from religion or culture, such as the secular PFLP in Palestine or the Free Patriotic Movement in Lebanon.

As The Economist notes in its review of Hirsi Ali’s autobiography Infidel (Free Press 2007), the lives of “Muslims [are] more complex than many people in the West may have realized. But the West’s tendency to seek simplistic explanations is a weakness that Ms. Hirsi Ali also shows she has been happy to exploit.”[20]

The Irony of Demonization

There is an irony underlying the careers of these recanted Muslims—namely, that the very same western policies they refuse to condemn often spur the resentment they ascribe as cultural backwardness or religious fervor. The anger and protestations of Muslims are often more rooted in rational considerations than Western militarists are willing to admit. Muslims, like any other group, possess layered identities, any aspect of which can be aroused in anger. As M. Junaid Levesque-Alam of the Crossing the Crescent blog explains, “When three planes hurtled into national icons, did anger and hatred rise in American hearts only after consultation of Biblical verses?”[21]

Indeed, the very existence of icons such as Ayaan Hirsi Ali, Wafa Sultan, and Nonie Darwish falsifies to a great extent the notion of a monolithic Muslim world. Their ability to react and rebel against their environment, as well as the variety of Muslim responses to their work, demonstrate the diversity of thought and opinion within Muslim society. Portraying Muslims in a simplistic and negative light may be a useful tool to build popular support for military campaigns. But in the long term, ignorance and stereotyping will only serve to undermine any policy objectives in the region. A more thoughtful foreign policy would be one that is grounded in dialogue, interaction, and the drive for understanding—not demonizing and finger-pointing. The sooner the U.S. public confronts this reality, the sooner peace can be achieved in the Middle East.