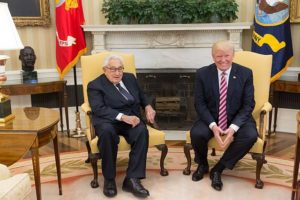 The U.S. should support regional governments’ efforts to limit Iran’s power projection as well as Iranian political elements pursuing liberal democratic reforms. If Iranian leaders experience a transformational shift in U.S. relations and their threat perception is alleviated as a result, they will likely moderate their policies of their own accord.

(LobeLog) As the Trump administration seeks ways to avoid war with Iran while defending U.S. national security interests, it should devise a strategy intended to effect a transformation in U.S.-Iran relations, rather than continue with an approach focused solely on applying maximum pressure to yield improbable concessions.

The collapse of the Iran nuclear agreement has demonstrated that although transactional diplomacy was politically expedient, it could not withstand the animosity generated by regional conflicts. Foreign policy decisions by both sides concerning Syria, the Israeli-Palestinian issue, Saudi Arabia, and Iraq led the U.S. and Iran to gravitate back toward conflict with each other. The Trump administration unnecessarily accelerated this return to a completely hostile dynamic. The nuclear issue, nevertheless, would have returned to the fore under any administration, Republican or Democratic, due to the inherent shortcomings of the nuclear agreement.

What realistic alternative is there to increasing economic sanctions in the improbable hope that it will precipitate regime change primarily from within? Although regime change effected through economic pressure and covert measures is certainly attractive, there is a high probability that it could inadvertently lead to war or a replacement of the current Iranian government with an even more belligerent one.

In their book Kissinger the Negotiator: Lessons from Deal-Making at the Highest Level, James K. Sebenius, Ambassador R. Nicholas Burns, and Robert M. Mnookin distill the wisdom former National Security Advisor and Secretary of State Henry Kissinger gained from his years of experience leading highly complex international negotiations with America’s adversaries. A few lessons from them may be helpful for devising potential solutions.

Evaluate and reevaluate your fundamental premises.

In their book Field of Fight: How We Can Win the Global War Against Radical Islam and Its Allies, President Trump’s short-lived National Security Adviser, Lieutenant General Michael Flynn and co-author Michael Ledeen asserted, “Tehran’s war against the West is not based on a desire for territory, or on real or imagined grievances; it is rooted in the nature of the Islamic Republic…”

This seeming ignorance or failure to comprehend the very real grievances Iran has against the U.S. would logically lead one to conclude that Iranian leaders are, tautologically, hostile toward the U.S. because their ideology dictates it. In reality, Iranian views of the U.S. stem to a great degree from Iran’s trauma and are not necessarily impervious to change, though current Supreme Leader Ayatollah Ali Khamenei will remain highly resistant to it.

Likewise, senior Trump administration officials—including Secretary of State Mike Pompeo, Vice President Mike Pence, and Trump himself—have accused Iranian leaders of genocidal intent toward Israel and even Jews broadly. Yet Iran has one of the largest populations of Jews in the Middle East outside of Israel. Although Khamenei has consistently expressed his unacceptable intention to forcibly impose a one-state solution on the Israeli-Palestinian problem, this is an important distinction from Trump officials’ more diabolical characterizations.

An accurate assessment of Iranian leaders’ policies and the motivations behind them are essential to any possibility of a moderation in U.S.-Iran relations.

Khamenei indisputably aspires to return Jerusalem to Muslim control, as he and his predecessor have consistently articulated and acted on. What is less broadly understood is that Iranian leaders also feel themselves threatened by Israel. This is counterintuitive to most Americans, accustomed as they are to viewing Israel and the Muslim world in terms of a contest between David and Goliath. Although this was the case at its founding, “David” is now nuclear-armed and has the most powerful conventional military in the region, not to mention an American “Goliath” of its own backing it effectively unconditionally.

Iran’s Supreme Leader fears that, as Israel’s power grows, so will its efforts to establish Israeli economic, cultural, political, and military dominance throughout the region with U.S. support. These fears may be hyperbolic but they are not entirely irrational, as the Israeli government’s brazen discarding of the two-state solution has made apparent.

Ambassador R. Nicholas Burns noted in his memoir The Back Channel: “Even a sweepingly effective attack on the Iranian [nuclear] program, Obama believed, would only set back the Iranians by two or three years. They would undoubtedly regroup, take their program fully underground, and very likely make a decision to weaponize, with wide popular support in the aftermath of a unilateral U.S. or Israeli strike.”

This would necessitate preemptive regime change and military occupation to form and stabilize a new state not hostile to the U.S. Suppressing the resulting insurgency would be far more costly than the U.S. invasion and occupation of Iraq and could trigger Russian military intervention.

The U.S. should support regional governments’ efforts to limit Iran’s power projection as well as Iranian political elements pursuing liberal democratic reforms. It should also keep in perspective that a transition in power to a new Supreme Leader is probable within the next five years, which may open up unforeseeable diplomatic opportunities. As long as Iran does not make a dash toward nuclear weapons or imminently threaten to severely disrupt the global economy, there is no justification for an escalation to full-scale war.

Evaluate the potential for a multi-front negotiation campaign to achieve your target deal, paying special attention to the “home front.”

Saudi Arabia’s alignment with Israel against Iran has essentially neutralized any serious pressure from the Arab-Muslim world on the Israeli-Palestinian issue for the time being. This shift has emboldened the Israeli settler lobby and made it impossible to achieve compromise between the U.S. and Iran on this issue.

An “America First” strategy would factor in the moral hazard of continuing to indulge this lobby, which will not only increase the probability of a U.S.-Iran conflict but also exacerbate violent extremism throughout the broader Muslim world.

Be both empathetic and assertive.

Sebenius et al., analyzing Kissinger’s art of the deal, advise negotiators to, “Strive to understand your counterpart’s perspective, and demonstrate this understanding as you build rapport and relationships—while asserting your own needs and interests.”

As former Secretary of State John Kerry emphasized in his memoir: ‘There must be a sense of genuine, mutual respect underlying this negotiation,’ [Sultan Qaboos, the leader of Oman] told me. ‘If the Iranians feel bullied or condescended to, they will walk away at once.’ …Despite huge substantive differences [our negotiations with Iran] were always cloaked in a mantle of respect. It made all the difference.”

Kissinger was not a proponent of diplomatic brinkmanship, according to Sebenius and his colleagues. They assess, “In Kissinger’s view, making extreme opening offers and conceding slowly toward one’s ‘real’ limits, and only when forced to do so, converted negotiations into a lengthy test of wills and stamina. While useful to demonstrate ‘toughness’ to a home audience…[it] risks needless impasse.”

Pompeo’s list of 12 demands, which Trump has discarded in favor of (his predecessor’s policy of) talks without preconditions, was simply unrealistic and unnecessary.

This is not to say the U.S. should not substantively promote political reform in Iran, but rather that if Iranian leaders experience a transformational shift in U.S. relations and their threat perception is alleviated as a result, they will likely moderate their policies of their own accord.