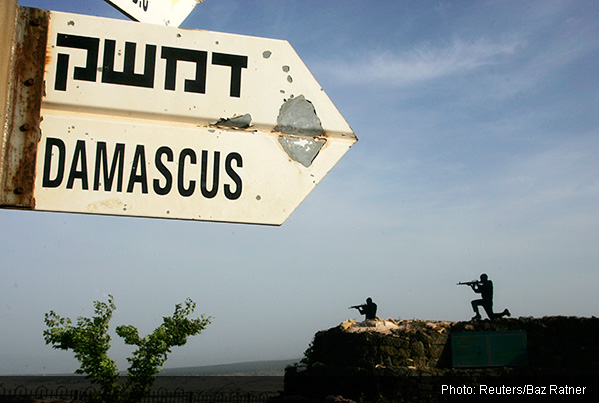 With ongoing peace talks between Israel and Syria, a new political settlement in Lebanon, and the specter of confrontation with Iran on the horizon, Middle East expert Joshua Landis sees U.S. policy in the region at a “crossroads.”

Landis, who co-directs the Center for Middle East Studies at the University of Oklahoma and runs the blog Syria Comment, describes the Syrian regime as making an unprecedented push to normalize relations with the West. But neoconservative hardliners in Washington continue to resist any engagement with Syria, presenting the possibility that this window of opportunity will be lost.

Landis spoke to Right Web correspondent Daniel Luban about Syria, Israel, and the future of U.S. policy in the region.

Right Web: Let’s begin by talking about the current negotiations between Syria and Israel that are being mediated by Turkey. What was the impetus behind entering these negotiations for both sides?

Joshua Landis: For Israel, the dynamic is in part powered by Olmert and the trouble he’s gotten himself into at home—his unpopularity and the corruption cases against him—which have caused him to gamble a bit and reach out to Syria.

Israel looked at this situation and was very realistic. Their military might did not defeat Hezbollah; the U.S. strategy failed; therefore the only alternative was diplomacy. They decided to reach out to Syria to disarm Hezbollah, which Syria can of course do because it’s the main conduit for arms to Hezbollah.

RW: What about on the Syrian side?

JL: Syria is trying very hard to change the Western attitude toward it and come out of isolation. One step along the way was the Doha accords in May, which led to [French president] Nicholas Sarkozy inviting [Syrian president] Bashar al-Assad to Paris in July. This was something of a coming-out party for Assad, but he still has the U.S. to deal with. Syria wants the U.S. to drop its claims that Syria is a terror-supporting state and to lift economic sanctions against it.

And of course, Syria wants to get the Golan Heights back, as well as things like a desalinization plant and a better water-sharing agreement with Turkey.

RW: How far can the talks progress without U.S. participation?

JL: Both sides need the United States at the table. Any deal will require a great deal of money and a lot of security guarantees from the U.S.; both sides are in a sense looking to the 1978 Camp David Accords between Egypt and Israel as a model. So when the U.S. says rather offhandedly that there’s nothing stopping Israel and Syria from going ahead and signing a peace agreement, it’s being rather disingenuous.

RW: Can we expect to see U.S. participation in the talks for the remainder of the Bush administration, or are the parties just waiting for a new administration to take power?

JL: There’s a certain amount of urgency at the moment. There are still six more months of the Bush administration, and then six months of the next president getting his team in place. So that’s a year before anything can move forward on this, and in a year’s time the earth can shift from underneath the parties. Olmert’s openness to this process is something Syria is eager to pursue, and they don’t want to lose this moment of opportunity before his resignation.

As a result, Syria is engaging in a major charm offensive. And significantly, they’ve been courting people like [former American Israel Public Affairs Committee president] Thomas Dine to help set up meetings in Washington. This is new! For Syria to reach out to the Israelis not just through the negotiations in Ankara but through the Jewish community in the United States is a potential game-changer in many ways.

But it hasn’t worked—not yet. Where we are now is at a crossroads. There is a moment of opportunity right now to change the entire strategic architecture of the region which could be missed—and probably will be missed.

For instance, we just had a Syrian delegation that came to Washington, and initially Riad Daoudi, legal counsel for the Ministry of Foreign Affairs and lead negotiator in the Israel talks, was supposed to meet with [U.S. Assistant Secretary of State for Near East Affairs] David Welch. For reasons that remain a little murky to me, that fell through. A friend in the State Department told me that part of the reason was that it was just too much for the Bush administration to absorb. Washington had just announced that it was going to meet with the Iranians in Geneva, which had caused a firestorm of protest, and they could deal with only one meeting with one ‘axis of evil’ power at the same time. These are the sort of opportunities that are being lost.

RW: What do you see as the forces in Washington skewing Syria policy in one direction or the other?

JL: Syria has become in a sense the fulcrum between the remaining neoconservative influence in Washington, and the rising tide of realists. And the clash is really around the National Security Council and the Office of the Vice President, which are the home of the neocons, and the State Department, which is more dominated by the realists.

The Republican Party, led by the neoconservatives, is opposed to any sort of deal. It sees a deal as caving in to evil and caving in to terrorism. The neoconservatives see Syria as evil by its nature, as a spoiler nation that will remain constitutionally a supporter of terrorism, and feel that it ultimately has to be crushed or have regime change. And of course Washington’s not powerful enough to do it now, but the point is to trip up any efforts to accommodate Syria—so that at some later date, perhaps decades away, when the U.S. has regrouped and its army is powerful again, it can move against Syria.

RW: There’s been a fair amount of press lately about the supposed power shift within the Bush administration away from hardliners such as Dick Cheney and toward moderates such as Condoleezza Rice. Have you seen evidence of such a shift in Syria policy?

JL: The State Department has been pushing for dialogue with Syria, but either it hasn’t been pushing hard enough, or else it’s been defeated. At the mid level and at the fairly senior level I think everyone at State sees the logic of doing this deal. But Rice has not been able to change the situation, and it’s not clear how much she wants to change it. All we know is that the State Department has failed to engage.

Now, Rice met with Walid Mouallem, the Syrian foreign minister, in the spring of 2007. In that meeting the U.S. pressed Syria for intelligence sharing on al Qaeda and the mujahideen that were crossing the Syrian border into Iraq. Syria said that they would happily work with the U.S., but first the U.S. had to send an ambassador to Damascus—that in return for cooperation and intelligence sharing, they wanted recognition

from the United States that Syria is not a rogue state.

Rice could not do this—I don’t know whether she wanted to do it or not. But instead, Washington said that Syria knows what it needs to do and it should just do it all on its own. And Syria is not inclined to do that—if America insults it and keeps it in the doghouse at the same time that it tries to get Syria to act on its behalf, Syria is going to spit in America’s eye.

But what that means is that mujahideen continue to slip into Iraq and kill American soldiers. And people in General [David] Petraeus’s office have been looking for ways to work with Syria, but they’ve had their hands tied by the White House—they’re not allowed to speak to Syrian officials. As a result there isn’t the kind of security that there could be on the border, and American soldiers continue to bleed because of this stubborn, counterproductive policy.

The neocons have failed miserably. They have nothing to show for themselves. They don’t have Lebanon, they haven’t disarmed Hezbollah, and the mujahideen continue to find the Syrian border a permissive environment. They have fundamentally misinterpreted how powerful they are. They have overestimated their own power and ability in the region, both physical and moral.

RW: Right now Iran is the most contentious issue on the table in Washington. How do you see the Iran situation affecting Syria policy?

JL: The real debate in Washington right now is about whether you can “flip” Syria, meaning to use the Golan as an incentive to tear Syria away from Iran and Hezbollah. The alternative policy, the more sane and feasible policy, is to try to bring Iran, Syria, and Hezbollah along together.

Hezbollah and Syria and Iran are not stupid. They know exactly what Washington is trying to do, and they’re not going to be flipped, because they know that the flippers don’t want to make peace with them—they want to divide them and then squash them. So Syria is going to be very disinclined to take that step because it doesn’t trust the West—and it has no reason to.

And therefore the best way forward is to bring people along together, to show Iran and Syria that the United States is not trying to divide and squash them, that there are common interests that can be dealt with, and move step by step, understanding that Rome wasn’t built in a day. So there’s a different game going on, rather than America simply trying to destroy its enemies—it’s got to meet them halfway.

Daniel Luban is a contributor to PRA’s Right Web (https://rightweb.irc-online.org).