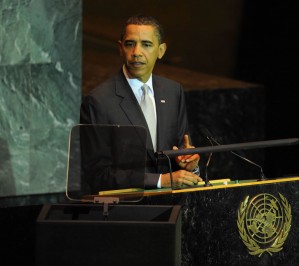 The past week has seen the United States effectively relinquish its role as the key negotiator of Middle East peace as the Palestinians, ignoring President Barack Obama’s entreaties, announced their decision to pursue UN membership and be recognized as an independent state. One of the key reasons for Obama’s failure to bridge the Mideast divide has been domestic politics—the power of U.S. “pro-Israel” factions, encouraged by Israeli Prime Minister Benjamin Netanyahu, to threaten the administration’s base if he strays too far from the Israeli line.

This pressure played a key role in forcing the president to walk back his earlier commitments to Palestinian statehood and declare to the UN General Assembly on Wednesday that “statements and resolutions at the UN” will not bring peace to the region. As Daniel Levy, a former Israeli peace negotiator in the government of Ehud Barak and currently a fellow at the New America Foundation, told the New York Times, “The U.S. cannot lead on an issue that it is so boxed in on by its domestic politics. And therefore, with the region in such rapid upheaval and the two-state solution dying, as long as the U.S. is paralyzed, others are going to step up.”

“Others” did yesterday, in particular, the conservative French President Nikolas Sarkozy, who directly contradicted Obama during his follow up speech at the UN, saying that it was time to “begin negotiations, and adopt a precise timetable” for Palestinian statehood.

At the same time that new forces are emerging to displace the U.S. role in the Middle East, domestic U.S. forces on the right are stepping up their challenges to Obama on Israel, and thereby further isolating both Israel and the United States vis-a-vis the growing international momentum in favor of a Palestinian state. Most notable among these is Republican presidential candidate Rick Perry, who during a carefully timed press conference on Tuesday lambasted the administration’s Middle East policies and promised Israelis that “help is on the way.” Sharing a stage with deputy Knesset speaker and World Likud chairman Danny Danon and a bevy of other right-wing figures, the Texas governor also used the opportunity to criticize the president’s efforts to engage regimes in Iran and Syria.

The press conference, which took place a few blocks from where the General Assembly was convening in New York, served to put Obama on notice that any effort to criticize Israel could well cost him at the ballot box. Reiterating his oft-stated view that his Christian faith bestows him a “clear directive to support Israel,” Perry repeatedly criticized Obama’s “policy of appeasement toward the Palestinians.” He went on to call for the ejection of the PLO diplomatic mission from Washington and a halt to U.S. aid for the Palestinian Authority if its leadership continues to pursue statehood—a proposal that not even the Israeli government supports. Although the Texas governor expressed his support for an eventual Palestinian state, he nevertheless called for the continuation of Israeli settlement construction in the occupied West Bank, declaring: “It’s their land; it’s their right.” His endorsement of the settlement project would abrogate some four decades of U.S. government policy.

Summing up his support for one-sided U.S. backing of the Israeli government, Perry seemed to suggest that Palestinians were simply less deserving of U.S. concern. "The Obama policy of moral equivalency,” he said, “gives equal standing to the grievances of Israelis and Palestinians, including the orchestrators of terrorism, [which] is a very dangerous insult."

The conference is Perry’s latest overture in a likely strategy to court the support of Christian Zionists and influential neoconservatives in Washington. Many of his remarks Tuesday echoed similar statements he made in recent op-eds in the Wall Street Journal and the Jerusalem Post, the latter of which Jonathan Tobin, editor of the neoconservative Commentary magazine, called “exemplary,” observing that “if you’re a presidential candidate who wants to lay down a pro-Israel marker, putting your name on an op-ed in the Jerusalem Post as a supporter of the Jewish state will do just as well.”

This was not the first time that Perry has attempted to strut his “pro-Israel” agenda. He previously criticized Obama’s allusion to Israel’s 1967 borders in May and called for the arrest of Gaza Freedom Flotilla activists in June. His courtship of neoconservatives and Bush-era hardliners dates back at least to this summer, when Perry had a closed-door briefing with Douglas Feith, William Luti, and Andrew McCarthy, which was reportedly convened by Donald Rumsfeld.

In a GOP field that was once thought to be marked by “the end of the neocon consensus,” hawkishness on the Middle East has come roaring back from Texas.