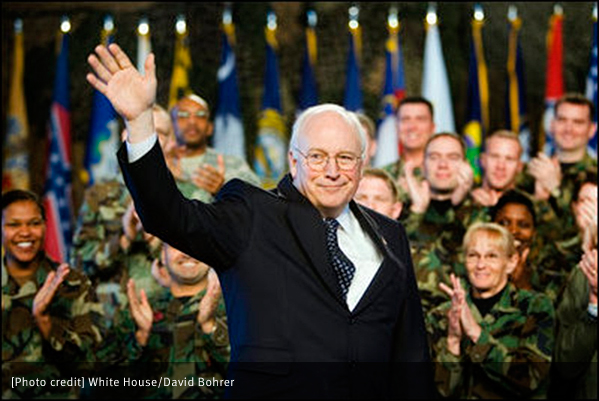 For a man who has become one of the most powerful and most despised figures in recent U.S. history, comparatively little substantive analysis has been written about Vice President Dick Cheney. This has been at least in part a product of Cheney’s notorious penchant for secrecy, which has resulted in much of the commentary on him settling for cartoonish vilification or amateur psychoanalysis rather than detailed insight into the vice president’s activities.

For this reason, as well as its documentation of the tremendous influence that Cheney has exerted on the course of U.S. foreign policy, Barton Gellman’s Angler: The Cheney Vice Presidency is among the most important works in the burgeoning literature on the George W. Bush administration and provides an excellent denouement to the Bush presidency. Based on unprecedented access to sources within the administration, Angler is the first in-depth treatment of Cheney aside from Stephen Hayes’s sycophantic 2007 authorized biography, and it does a great deal to improve our understanding of Cheney’s role in shaping the last eight years.

What picture of Cheney do we get from Gellman’s book? Angler dispels some of the lazier caricatures of Cheney that have been put forth. The vice president comes across not as a rapacious Halliburton war profiteer, but as a man of deeply held principle; not as a Svengali pulling Bush’s strings, but as a bureaucrat and policy wonk par excellence. It is in fact the image of Cheney as master bureaucrat that comes through most strongly and provides the key to understanding how he held and exercised power. Angler may come to stand as one of the classic chronicles of how bureaucracy shapes American politics.

Bush’s disinterest in details and self-characterization as “the decider” are well known. Power under Bush has therefore been less a matter of whispering in the president’s ear than of framing debates and regulating the flow of information shaping his decisions—of “reaching down” to find the junior staffers who will provide the desired message and marginalizing the senior administration figures who will not.

Much of the most revealing information in Gellman’s book concerns the subtle and little-noticed mechanisms by which Cheney worked the channels of government. It comes to be highly significant, for instance, that all e-mails from the National Security Council (NSC) were blind-carbon-copied to the Office of the Vice President (OVP), but not vice-versa; that Cheney’s chief of staff and right-hand man I. Lewis “Scooter” Libby was given the title of “assistant to the president” in addition to his other roles, thereby giving him advance access to all Oval Office paperwork; that Cheney broke with vice presidential tradition by sitting in on meetings of the Senate Republican Caucus.

And much of the drama in Angler comes from watching the OVP and its allies in Donald Rumsfeld’s Department of Defense outmaneuver and marginalize their rivals. (One minor flaw with the book is that Gellman’s understandable focus on Cheney may lead him to diminish the role of Rumsfeld; it may be more accurate to speak of a Cheney-Rumsfeld axis driving policy in Bush’s first term.) With the help of strategically chosen allies in other departments—John Bolton at State, John Yoo at Justice, Stephen Hadley at the NSC—Cheney and Rumsfeld were in the first years of the Bush presidency able to shut out the likes of Colin Powell, John Ashcroft, and Condoleezza Rice. They did not lose many debates in these years—and even when they did, Gellman documents how Cheney frequently managed to slip his preferred policy in through the back door after his antagonists had declared victory and shifted their attention elsewhere.

While most critical attention directed at the Bush administration has focused on the actions of high-ranking principal players, what has happened in the lower ranks of government has arguably been just as important. Junior staffers and career civil servants shape government policy at the ground level, and the past eight years have seen a remaking of the federal bureaucracy far beyond the traditional extent of the spoils system. As Gellman shows, Cheney deserves the most credit (or blame) for this change. While the rest of the Bush team poured into Florida following the 2000 election to handle the recount, Cheney stayed home to spearhead the administration’s transition team and fill out its ranks from top to bottom. Some of his choices were high profile—his one-time mentor Donald Rumsfeld was in short order put in charge of Defense—but the vice president also staffed the lower ranks with little-known but like-minded lobbyists and conservative movement activists. In this way he was able, as was his wont, to exert a constant influence on policy without leaving fingerprints. While Cheney is best known for his focus on foreign policy and national security issues, Gellman shows how influential he was in shaping domestic policy as well, particularly regarding energy, taxes, and the environment.

Still, it is the “war on terror” that forms the crux of the book, and it is here that Gellman has unearthed the most new information. His biggest scoop, first revealed last year in a Washington Post series co-authored with Jo Becker, concerns the National Security Agency’s warrantless wiretapping program, which had in fact been created by Cheney’s legal counsel David Addington. (Addington emerges in Angler as the intellectual driving force behind the war on terror, a figure nearly equal in importance to Cheney himself.) It has been known for several years that White House counsel Alberto Gonzales and chief of staff Andrew Card had shown up at a gravely ill John Ashcroft’s hospital bed in March 2004 to try to extract a signature reauthorizing the program after the Justice Department had declared it illegal. But Gellman provides the story’s coda: lacking legal authorization for the program, Addington nonetheless wrote up a presidential directive renewing it—what Gellman calls “the nearest thing to a claim of unlimited power ever made by an American president”—which Bush, unaware of the entire dispute, duly signed. Only when it became clear that more than 20 administration officials were within hours of quitting, including the top five layers of the Justice Department, did Bush reverse course and overrule Cheney. This rare defeat may have helped turn Bush against his vice president.

Cheney’s imprint on detainee treatment was equally great. The initial 2001 order giving the Pentagon the exclusive right to try detainees before military commissions came from the OVP, bypassing Powell and Rice. And it was Addington who apparently wrote the notorious 2002 memo declaring the Geneva Conventions “quaint” that went out under the name of Alberto Gonzales, whose reputation as an empty suit appears from Gellman’s account to be richly deserved. Cheney and Rumsfeld also repeatedly stifled a campaign by Rice and her NSC staff to regularize the status of Guantanamo Bay detainees. One of Angler’s most memorable images is of Rice bursting into tears in frustration after Rumsfeld simply refused to show up to meetings she called concerning the Guantanamo detainees.

rity Leader Dick Armey expressed resistance toward the Iraq War, Cheney got him on board with demonstrably false claims about Iraq’s abilities to miniaturize WMD and personal links between Saddam Hussein and Al Qaeda. Cheney also continued to peddle discredited claims about Iraqi WMD in meetings with other congressional leaders in the run-up to the war, provided a forum for David Wurmser’s conspiratorial linkages between Iraq and Al Qaeda, and sent staffer William Luti to head the Defense Department’s Office of Special Plans, the notorious intelligence shop responsible for much of the discredited intelligence about WMD.

Cheney has from the beginning served as the most aggressive hawk among the top administration leadership. His public pronouncements on the Iraq War have often gone farther than Bush himself was willing to—notably his warning of a “mushroom cloud” in 2002 and claim that the insurgency was in its “last throes” in 2005—and in recent years he has led the hardliners pushing for confrontation with Iran and North Korea. Because of this, he is often viewed as a close ally or even a part of the administration’s neoconservative faction, a group that in the first term included Paul Wolfowitz, Richard Perle, and Douglas Feith.

Cheney’s relationship with neoconservatism, and the supposed change in his views wrought by September 11, have been among the most-discussed aspects of the vice president. In the popular mind, the sensible realist of the 1990s, cautious of grand geopolitical ambitions, turned in a matter of hours into a paranoid extremist aiming to remake the world in America’s image by force of arms.

Gellman does not delve much into Cheney’s career prior to 2000, one place where the book could have been filled out, but he does argue for a substantial degree of continuity in Cheney’s views. This is probably wise, for much analysis on Cheney has been handicapped by this obsession with finding the smoking gun, the moment of conversion, or the hidden cause that explains everything.

It has been hard to remember since 2003, when the failure to find WMD turned what had been a fairly narrow argument over U.S. national security into an abstract and ultimately shallow debate over the potential for universal democracy, but the initial case for war was couched in a way that proved deeply attractive for many self-professed hard-nosed realists (not to mention many self-professed liberal humanitarians).

Although Cheney’s rationale for war was less about inspiring the Arab world with democratic ideals and more about cowing it with overwhelming firepower, he found the Iraq War equally congenial to his goals. Similarly, the debate over whether Cheney is “really” a neoconservative is a distraction from the larger point, which is that in the years since 9/11 he and the neoconservatives have been able to unite, with few real disagreements, over the shared goals of an aggressively nationalist foreign policy, a disdain for diplomacy, and an utterly unfettered executive power in time of war.

In Bush’s second term, and particularly since the departure of Rumsfeld in 2006, Cheney has been an increasingly marginalized figure in an administration dominated by Rice and Secretary of Defense Robert Gates. Gellman casts this as a story of hubris and nemesis, of overreach and reaction, and there is something to be said for this view. A common criticism of Cheney and Addington is that they were tactically brilliant but strategically short-sighted—that by fighting every bureaucratic battle to the utmost in their quest for unfettered executive power, they triggered a backlash that lost them the war.

Nevertheless, Cheney’s legacy may be more ambiguous than this neat moral tale would suggest. Although the incoming Obama administration may scale back many of Cheney’s gains, the new president inherits a country whose most important issues (Iraq, Afghanistan, the economic crisis) have been handed to him by the Bush team. And on some issues—for instance, executive power—it remains to be seen whether Obama even wants to dismantle the machinery that Cheney and Addington have built for him. From the vantage point of late 2008, Cheney appears to have paved the way for an Obama presidency and a progressive ascendancy. But a few more years may change our assessment of the vice president’s legacy as drastically as it has changed since the high-water mark of his power four years ago.