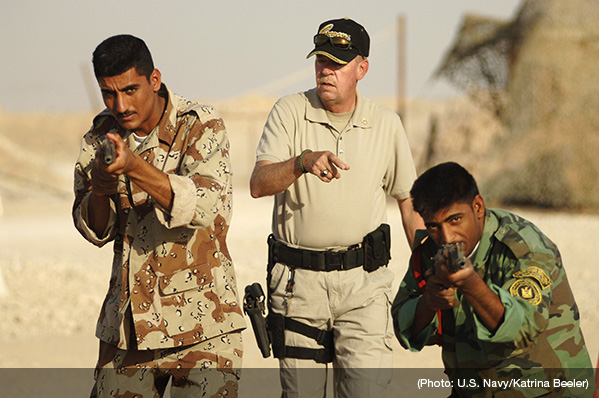 The aftermath of the 9/11 terrorist attacks proved a watershed moment for entrepreneurs intent on profiting from militarist U.S. foreign policies. The hawkish agenda of the Bush administration’s expansive “war on terror”—in particular, the wars in Afghanistan and Iraq—resulted in astonishing growth in the number of military-related contracts to private companies; from 2004 to 2006, U.S. contracts in the two physical war zones grew 50 percent each year.1 (Erik Prince’s Blackwater alone won $485 million in contracts in Iraq and Afghanistan in that period; KBR had the most with more than $16 billion.)2

But while some commentators tout private contactors as the possible “future of war,”3 it has become clear that some five years after President George W. Bush began the Iraq War, one of the key government agencies tasked with managing private contracts is bending under the weight of its responsibilities and misplaced priorities.

The auditing agency in charge of overseeing Department of Defense (DOD) contracts has been beset by serious problems that highlight the difficulty of managing private companies selling goods and services to the Pentagon—a problem that seems to have been exacerbated by the softball approach of former Secretary of Defense Donald Rumsfeld, among other factors. Not all contracts in Iraq are negotiated with the DOD, but with the amount of money spent on the department’s Iraq-related contracts since 2003 fast approaching $100 billion,4 this lack of effective oversight is a significant problem.

According to a recent report by the Government Accountability Office (GAO), on several occasions auditors at the Pentagon’s Defense Contract Audit Agency (DCAA), who review contracts between providers of goods and services and the government, altered their findings to benefit contractors.5

“Contractor officials and the DOD contracting community improperly influenced the audit scope, conclusions, and opinions of three audits—a serious independence issue,” the GAO stated in its report, which investigated DCAA audits conducted in several of its California field offices alleged to be faulty by auditors blowing the whistle.6

The findings sparked outrage from Sen. Claire McCaskill (D-MO), a former state auditor who, with Sen. Jim Webb (D-VA), spearheaded efforts to establish the Commission on Wartime Contracting, created earlier this year. The DCAA’s “irresponsible actions” and oversight failure “could be the biggest auditing scandal in the history of [Washington, D.C.],” McCaskill said.7

The Senate’s Committee on Homeland Security and Governmental Affairs plans to hold a hearing on DCAA on September 10, pointedly entitled, “Expediency Versus Integrity: Do Assembly-Line Audits at the Defense Contract Audit Agency Waste Taxpayer Dollars?”8

“The fact that the GAO found that none of the audits investigated had adequate work paper documentation is not a shortcoming. It’s a debacle and embarrassment. Zero percent of the audits reviewed were found to comply with government auditing standards,” wrote McCaskill in an angry letter to DCAA head April Stephenson, demanding that those responsible be fired. “Employees reported to GAO that they were threatened and made to change their findings to favor contractors, and felt intimidated and harassed concerning their cooperation with GAO.”9

The broader problem of ineffective oversight at DCAA can be traced in part to staff reductions that make it impossible for auditors to get the job done right. Like many other oversight agencies within the DOD, such as the Office of Inspector General and the Army Criminal Investigation Command, the DCAA’s staffing has been cut back significantly, even as the defense budget has skyrocketed. From 1993 to May 2008, the DCAA’s staff shrunk from 5,616 to 4,006 employees.10

Some of this staffing decline occurred even as the number of contracts to review has increased with the onset of the “war on terror.” With fewer staffers and more work, there is less time to carry out the audits.  An emphasis on strict performance metrics on the time allotted to auditors to carry out audits has pressured them to cut back on the quality or depth of the auditing, many DCAA auditors say.

In the audits examined by the GAO (not all of which involved war-related contracts), this was found to have been a problem.  “Auditors at each of the three DCAA locations told us that the limited number of hours approved for their audits directly affected the sufficiency of audit testing,” stated the GAO.11

Former DCAA auditors have said this is a problem across the agency. "There’s got to be a balance somewhere, but I think in DCAA headquarters’ strive to become a lean, mean audit machine, they swung the pendulum too far to the right," former DCAA auditor Ivan Juric told Government Executive.12 "And by doing that they kind of shot themselves in the foot.”

Internal DCAA memos, first reported on and made available by Government Executive, state that the agency is now reviewing its metrics and its staffing levels in the wake of the GAO report.

The threat to the taxpayer due to curbs on DCAA was predicted nearly a decade ago in congressional testimony. “We remain concerned about suggestions to limit or repeal controls that have been proven effective over time, such as the … Defense Contract Audit Agency,” said Eleanor Hill, the Defense Department’s inspector general during the Clinton administration, in written testimony in 1999. “We believe that these controls have been critical to maintaining the Government’s ability to adequately protect its interests in the acquisition area.”13

Richard C. Loeb, a Baltimore-based government contract lawyer and professor, says that changes in contracting regulations and in the DCAA over the years have weakened the agency. “Frankly, I’m surprised that DCAA has weathered the past 15 years as well as they have,” Loeb said. “The general climate has not been kind to auditors and others involved in oversight of the contracting process.”

Meanwhile, the money needed for DOD efforts continues to balloon. More DOD contracts combined with smaller oversight staffs is a formula for failure, as the GAO report noted: “Downsizing of contract oversight staff in the 1990s coupled with hundreds of billions of dollars in increased contract spending since 2000 has exacerbated the risks associated with DOD contract management.”14

To combat fraud and mismanagement of contracts, McCaskill and Webb created the Commission on Wartime Contracting, which aims to address “the sys

But the bipartisan commission, co-chaired by former DCAA official Michael Thibault, is believed to have met at least once privately and has yet to make any impact on the situation. (Another commissioner, Dov Zakheim, was DOD comptroller from 2001 to 2004, in which capacity he oversaw the DCAA. Zakheim is now vice president of Booz Allen Hamilton, which in the run-up to the Iraq War organized conferences to help U.S. companies win contracts in Iraq.)16

One commission member, Charles Tiefer, has said that the DCAA’s job was complicated by the attitude of former Secretary of Defense Donald Rumsfeld, who seemed to encourage sympathetic relationships between auditors and contractors.

"Rumsfeld was entirely unsympathetic to ‘adversarial auditing’ by DCAA," said Tiefer. "He preferred smoothing over disputes between auditors and contractors."

Normally, when the DCAA finds that a contractor’s costs are unsubstantiated, the DOD contracting agency aggressively renegotiates, but with contracts in Iraq, this has happened a "peculiarly low" number of times, according to Tiefer, who is also a law professor and a former deputy general counsel of the House of Representatives.

Tiefer pointed to the case of Charles Smith, the former head of the Army’s field support division that oversaw Halliburton subsidiary KBR’s multibillion-dollar contract for providing services to U.S. troops in Iraq.

After Smith tried to implement a DCAA recommendation to withhold 15 percent of payments to KBR for submitting more than $1 billion in apparent overcharges—including for meals never served to troops in Iraq and unsubstantiated labor fees and materials purchases—in 2004 he was removed from his position, effectively ending his 31-year Army career.17

In July testimony to the Democratic Policy Committee, Smith said, "Instead of tightening controls over the contract, the Pentagon essentially outsourced oversight” from the DCAA to a private company and waived the standard penalty of withholding 15 percent of payment. "The whole process was irregular and highly out of the ordinary," Smith said.18

"The interest of a corporation, KBR, not the interests of American soldiers or American taxpayers, seemed to be paramount," Smith said. "In 31 years of doing this work, I have never seen anything like the way KBR’s unsupported charges were handled by the Department of Defense."

After Smith was removed, an unusual arrangement was created to oversee KBR and keep the DCAA at bay, said Smith and other experts. Virginia-based RCI Holding Corporation (later acquired by Serco, a British company) was hired to replace the DCAA’s auditing function, said Smith. "They ignored DCAA’s auditors," Smith said to the New York Times.19

"I have never seen a contractor given that position, of estimating costs and scrubbing DCAA’s numbers," Bob Baumann, a former Defense Criminal Investigative Service fraud investigator, told the Times. "I believe they are treading on dangerous ground."

Nick Schwellenbach is a Washington, D.C.-based reporter and a contributor to PRA’s Right Web (http://www.rightweb.irc-online.org/).