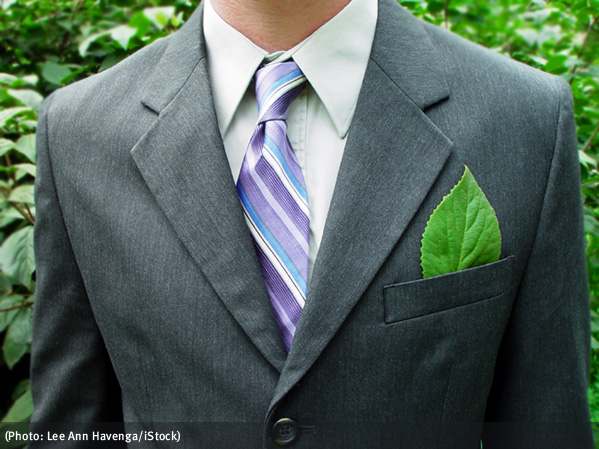 Neoconservatives, despite their appreciable influence on President George W. Bush’s administration, have never numbered very many people. By forming tactical alliances and associations with groups like evangelical Christians and hardline nationalists to promote their policy goals, neocons became a powerful faction in Washington, D.C. Recently, some neocons are attempting to forge what might be their most unexpected alliance yet—with environmentalists.

A merging of neoconservatism, with its aggressive support of U.S. military action abroad (among other things) and the green agenda, with its priorities on sustainable living and earth-friendly policies, seems counterintuitive. But so-called “greenocons” seem to have a foot planted in each camp, won over by the idea of improving U.S. security by reducing the amount of money sent to oil-rich regimes that neocons feel “by and large, are hostile to us.” 1 The greenocons, as Robert Bryce reported in Slate, are “going green for geopolitical reasons, not environmental ones.” 2

The most visible of the bunch is former CIA chief R. James Woolsey, who wears his ideology on his bumper—a sticker on his hybrid vehicle sums up the greenocons’ argument: “Bin Laden Hates This Car.” 3

So-called greenocons worry that the list of major oil exporters overlaps with a list of countries that harbor ill will toward the United States—Saudi Arabia, 4 Venezuela, and Iran, for example. These oil-exporting governments oppose the U.S. agenda, according to the greenocons, and are also beneficiaries of billions of dollars from the American “addiction to oil.” 5

Last year in congressional testimony, Anne Korin told the House Committee on Foreign affairs that high oil prices “will be perceived as a victory for the Jihadist movement and a reaffirmation that the economic warfare component of its campaign against the West is a resounding success.” 6 This angle capitalizes on environmentalism’s concerns over energy and oil dependence and mixes them with the neoconservatives’ concerns about terrorism and national security.

Korin is the chair of the greenocons’ Set America Free Coalition (SAFC), which promotes alternate fuel sources with alarmist language: “Because so much of the oil we import comes from countries that hate us, we’re actually helping to bankroll terrorists that hunt us,” the coalition argues. “As long as our cars can only run on gasoline, we’ll continue to be held hostage.” 7

Korin is also member of the neocon-led Committee on the Present Danger (CPD), saying in her blurb on the CPD site, “It is essential to put the war in the context of our oil dependence and connect the dots between our excessive oil demand and the national security challenges facing our society. We help fund the spread of radical Islam and the proliferation of terror every time we go to a gas station and fill up the tanks of our cars. Therefore, a shift from oil is the best weapon against America’s enemies, who derive their power from oil and use it to fuel terror and spread hatred toward our nation.” 8

The notion has attracted hawks, including Center for Security Policy president Frank Gaffney (who recently wrote that energy security is “one of our most important national security challenges”) 9; Daniel Pipes, head of the Middle East Forum; Cliff May of the Foundation for Defense of Democracies; and Meyrav Wurmser of the Hudson institute. 10 As Laura Rozen reported, “Being a green neoconservative is becoming less lonely, especially as more hawks come to energy as a security issue.” 11

But the apparent convergence of the right-wing with environmentalism, typically a politics of the left, is complex and conflicted. Take the “drill, baby, drill” plank of the 2008 Republican platform, which played on struggles with energy costs and the unwillingness of many Democrats to drill in Alaskan wildlife preserves. Gaffney supports drilling—certainly not a green program, and one that wouldn’t even break U.S. dependence on oil. The greenocon nexus gets even more complex when one examines the beliefs of other neocon allies. Christian Right leader Gary Bauer, for example, urged a member of the National Association of Evangelicals to resign because he publicly took the “disturbing” position that “global warming is an indisputable fact” 12—Bauer, however, is nevertheless a member of the Set America Free Coalition. 13

The apparent contradictions in the belief system of the greenocons leave many critics skeptical. For the greenocons, however, there is no contradiction. “Does this mean that we cannot use oil or import any? Of course not. Oil is a useful commodity that can readily transport energy long distances,” wrote Woolsey and Korin in the National Review. “But in transportation it brooks no competition—it is thus not just a commodity but a strategic commodity. Oil’s monopoly on transportation gives intolerable power to OPEC and the nations that dominate oil ownership and production. This monopoly must be broken.” 14

Although it is clear that people like Woolsey, who uses solar panels at home and drives a hybrid, can exhibit both neoconservative and environmental tendencies, a true coalition between right-wing hawks and a left-leaning movement seems tenuous.

“My sense is that the people in the environmental community are much more excited about the evangelicals [who support the green agenda] than then neocons because of the crude nationalism and jingoism that these guys bring to it,” said Helena Cobban, an expert on global strategic affairs and author of the recent book Re-Engage: America and the World After Bush. 15

Korin, the Set America Free Coalition chair, is also codirector of the Institute for the Analysis of Global Studies, an energy security think tank where Woolsey and Eliot Cohen are advisors. Connections between the Set America Free Coalition and the institute abound: Gal Luft, Korin’s institute co-chair, is a Set America Free Coalition member, and when one calls the telephone number listed on the website of the coalition, it is answered by the institute. The Institute for the Analysis of Global Studies was one of the earliest organizations that connected hawks to green ideas. 16 According to its website, it seeks to educate the public about the ties between energy, economics, security, and the technologies and policies that “could help

us move into an era of enhanced energy security, and increase peace, prosperity and stability in the world.” 17

Despite its ambition, the Set America Free Coalition has yet to make much of an impact and seems to be running behind current events; its homepage warns that “With gas prices on the rise and no end in sight, our cars’ addiction to foreign oil is bankrupting us.” 18 And its goals are clearly at odds with many environmentalists; Luft says that “the Set America Free community does not take positions on drilling or controversial issues.” Nor, it seems, does the institute. 19

Neoconservatives have successfully absorbed and attracted adherents to their causes by appealing to the shared interests. For example, liberal interventionists and hawks like Michael O’Hanlon—who has collaborated closely with groups like  the Project for the New American Century and American Enterprise Institute—worked with neoconservatives to support the “surge” policy in the Iraq War. An alliance also exists between neoconservatives and U.S. evangelicals who are “Christian Zionists” like John Hagee and his Christians United for Israel; both groups believe that U.S. and Israeli security are inextricable and that a “greater” Israel must include the occupied territories.

In the case of environmentalists, the pitch has been to promote alternative energy supplies that will reduce domestic use of fuels that damage the environment. But this is likely a subordinate goal for neocons; the primary aim is to geopolitically weaken nations in the Middle East with perceived hostilities to the United States and Israel by depriving them of oil revenues.

“What we need now is a coalition of tree huggers, do-gooders, sodbusters, and cheap hawks—people like me who want to reduce the leverage of Middle East countries, and win this long war on terrorism with as little shooting as possible,” said Woolsey, marking the release of a letter he signed with the Energy Future Coalition in 2005. 20

Greenocon thinking rests on the perception of energy security as an element of national security. As laid out by IAGS, “It is no coincidence that so much of the cash filling terrorists’ coffers come [sic] from the oil monarchies in the Persian Gulf. It is also no coincidence that those countries holding the world’s largest oil reserves and those generating most of their income from oil exports, are also those with the strongest support for radical Islam. In fact, oil and terrorism are entangled. If not for the West’s oil money, most Gulf states would not have had the wealth that allowed them to invest so much in arms procurement and sponsor terrorists organizations.” 21

One might assume that neoconservatives and environmentalists might make strange bedfellows. But Bracken Hendricks, a senior fellow at the left-leaning Center for American Progress who researches energy independence and climate change issues, doesn’t see it that way.

“This is not trying to get peace-loving environmentalists signed on to some kind of militarist agenda,” Hendricks says. “These people are primarily concerned with a dependence on oil and what it does to our national security.” 22 Weaning America off of its oil dependence is a “fundamentally green aim,” Hendricks points out.

Some in the conservative movement hope to lead the U.S. Right toward a more environmental outlook. David Frum, a leading neoconservative and American Enterprise Institute scholar, wrote recently that “environmental protection as a core value” is a principle that “must be included in a majority conservatism.” 23

Hendricks, for one, will accept all takers to the cause. “Climate change is a local, domestic, and international issue. And it’s destroying the planet. I, for one, am not going to turn away a single ally.”

Ali Gharib is a contributor to PRA’s Right Web (https://rightweb.irc-online.org/).