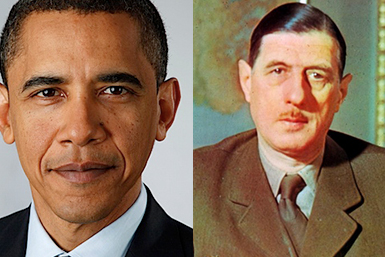 Waiting for Obama
By Leon Hadar

Some Israelis fear that Barack Obama is the second coming of Charles de Gaulle–a leader of a powerful global patron who is willing to turn his back on the Jewish state if it goes to war with Arab neighbors. Thus far, however, the Obama administration has merely repeated long-held U.S. policy goals in the region, albeit ones that contrast sharply with the neoconservative-tendencies of the Bush presidency. As Middle East observers wait for Obama to launch his Middle East peace initiative in the coming months, they wonder, can the president fill the political vacuum in Israel and Palestine and start pressing the two sides to consider making painful compromises. Read full story.

Dan Senor
The former spokesman for the coalition authority in Iraq, Senor is the cofounder of the neoconservative-led Foreign Policy Initiative, where he alternatively applauds the Obama administration’s hard line in Afghanistan and bemoans its “weakness” on Iran.

Dennis Ross
It remains unclear whether Dennis Ross’s new post in the National Security Council will increase or diminish his impact on Mideast policymaking.

Paul Wolfowitz
The former Pentagon number two and ex-head of the World Bank added his voice to the chorus of hardliners denouncing President Obama’s “weakness” in confronting the election crisis in Iran.

American Conservative Union
A core member of the traditional Right, the ACU has helped drive the Republican Party further right since the election of President Obama.

David Addington
Dick Cheney’s right-hand man on everything from evading congressional oversight of “war on terror” policies to authorizing the use of torture, Addington is one of several Bush lawyers who has had trouble finding work since leaving government service.

A new report from veteran Middle East hands urges the Obama administration to proceed cautiously with Iran, but move quickly to broker formal talks between Israel and Palestine.

Behind Detainee Release, a U.S.-Iraqi Conflict on Iran
By Gareth Porter

The recent release of five Iranians held by the U.S. military in Iraq highlights growing differences between Washington and Baghdad over Iranian policy in Iraq.

Is Obama Slouching Toward War With Iran?
By Tony Karon

Although the Obama administration clearly believes an Israeli attack on Iran would be disastrous, recent events seem to point to a concerted campaign to make the Iranians think an attack is coming, a strategy that could have severe unintended consequences.