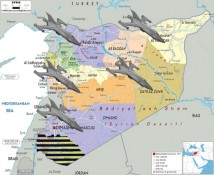 The recent deaths of two Western journalists in Syria, killed during the Assad regime’s shelling of the Amr Baba neighborhood in Homs, has cast a new light on a near-daily slog of reports chronicling the carnage in Syria, where the regime has launched increasingly brutal attacks on civilian population centers in response to an increasingly armed and violent opposition.

Citing the final dispatch of Marie Colvin, one of the slain reporters, the Washington Post quickly editorialized: “Ms. Colvin was trying to tell the world is that [Srebrenica] is happening again, in Baba Amr. … If the Western nations and Syria’s neighbors continue to stand by passively, Ms. Colvin’s words will come back to haunt them.” A few days before, the Post had explicitly called for the West to arm Syria’s opposition elements: “The most available and workable solution,” it claimed, “is tactical and materiel support for the anti-regime forces, delivered through neighbors such as Turkey or the Persian Gulf states.”

That the Post, with its cast of neoconservative writers and editors, would call for U.S. involvement in a conflict in the Middle East should come as no surprise. Neither should calls by Sens. John McCain (R-AZ) and Lindsey Graham (R-SC) for the United States to channel arms to Syrian opposition fighters through connections in “third-world countries,” or Sen. Joe Lieberman’s (I-CT) support for instituting Libya-style “no-fly” zones over parts of Syria. But the Obama administration, which has ostensibly sought a diplomatic resolution to the crisis, also appears to be softening its once-strong opposition to arming Syria’s rebels.

Last week, a coalition of 56 hawks assembled by the neoconservative Foundation for Defense of Democracies and Foreign Policy Initiative sent President Obama an open letter demanding action on Syria. The letter—whose signatories included the likes of Paul Bremer, Elizabeth Cheney, and Dan Senor—called on the president “to take immediate steps to decisively halt the Assad regime's atrocities against Syrian civilians, and to hasten the emergence of a post-Assad government in Syria,” including by providing “self-defense aid to the FSA [Free Syrian Army].”

Calls for further escalation will doubtless follow. And although they are keen to raise recent events, many of the letter’s signatories have been calling for regime change in Syria for months or even years.

Max Boot, another signatory to the letter, has claimed that “foreign jihadists will flock to Syria” if Assad is not deposed—a rather astonishing assertion given the documented (if not overwhelming) presence of Islamists in Syria’s domestic opposition, as well as Iraq’s all too recent descent into violent extremism in the wake the U.S. invasion.

However, Syria hawks have yet to articulate how funneling arms to a fractured Syrian opposition could help end the bloodletting in the country. Foreign Policy’s Marc Lynch, himself a stringent backer of the NATO action in Libya, has strongly opposed a similar course in Syria. “Arming the Syrian opposition is not a cheap and effective substitute for military intervention,” he wrote, “and it is not a generally harmless way to ‘do something.’ It does not guarantee either the protection of the Syrian people or the end of the Assad regime. It is more likely to produce a protracted stalemate, increased violence, more regional and international meddling, and eventual calls for direct military intervention.”

Since Gaddafi was deposed in Libya, for instance, scores of dueling militias—often with western-provided arms—have continued to skirmish with each other and terrorize civilian populations. Similarly, funneling arms wantonly into Syria might help bring down Assad, but there’s no reason to expect it will end the killing. It may well do just the opposite.