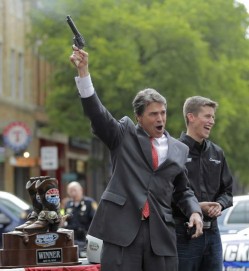 Compared to past election cycles, this year’s Republican presidential field has thus far offered an unusual level of diversity on foreign policy. While the field does not fully reflect the level of war-weariness that has crept gradually into segments of the GOP congressional caucus (to say nothing about the weariness of war spending), it has nonetheless accommodated certain deviations from the party’s nationalist-neoconservative bent of 2004 and 2008.

In the extreme, libertarian candidates Ron Paul and former New Mexico Governor Gary Johnson have called for significant rollbacks in U.S. foreign adventures, as well as a tightening of the spigot of military spending that nourishes them.

Less extreme – but still arguably more dovish than President Obama – has been Jon Huntsman, the former ambassador to China whose foreign policy advisors have come overwhelmingly from the realist school of the George H.W. Bush era. Huntsman has advocated a much more rapid withdrawal of U.S. forces from Afghanistan than the president has.

Other candidates, notably Newt Gingrich, Michele Bachmann, and Herman Cain, have with varying degrees of success attempted to blend tea party populism with strands of Christian Zionism and Islamophobia. The result has been mixed messages on the war in Libya but a decidedly hawkish tenor overall.

Of all the candidates, it has been Mitt Romney and Tim Pawlenty who have most closely embraced traditional GOP hawkishness, although also to differing degrees. Romney, while calling for increases in military spending and aggressively promoting American exceptionalism as a basis for U.S. foreign policy, has also acknowledged a desire to “bring our troops home as soon as we possibly can, consistent with the word that that comes from our generals.” An advisor described Romney’s orientation as “American primacy with a heavy dose of selective engagement.” Pawlenty, meanwhile, while eschewing the label “neoconservative,” has assiduously rehashed neoconservative talking points on Israel, Iran, Syria, Libya, Afghanistan, and Russia, earning plaudits from the likes of Michael Ledeen and the Weekly Standard.

Still, whether for policy reasons or because none of these candidates has yet proved particularly strong, the GOP foreign policy establishment in Washington – much like the GOP establishment at large – has yet to line up behind any particularly candidate. Indeed, there remains a palpable appetite for new candidates.

Texas Gov. Rick Perry, George W. Bush’s successor in Austin and the longest-serving governor in the country, has received the brunt of recent attention from Republicans seeking out new standard bearers. Certainly, Perry’s telegenic style and well documented conservatism on social and fiscal matters would make him an appealing choice for GOP activists searching for a “bridge” candidate between the tea party and the traditional Republican establishment.

Given the rather unusual political environment, however, one might wonder whether Perry’s right-wing views extend to matters of foreign policy. But by all available accounts, they do.

Indeed, Perry’s recent overtures on foreign policy have played a significant role in indicating that he is serious about considering the race in the first place. It started at least as early as May, when Perry came out against President Obama’s assertion that Israel’s 1967 borders should be a starting point for negotiations about the contours of a future Palestinian state. “As someone who has visited Israel numerous times,” he said, “I know that that it is impracticable to revert to the 1967 lines. President Obama is asking our Israeli friends to give up too much security and territory as a prelude to a renewed peace process.”

The following month, Perry wrote a letter to Attorney General Eric Holder advocating the investigation and prosecution of any American participants in the international Gaza Freedom Flotilla. “I respectfully request that the U.S. Department of Justice take immediate steps to investigate, enjoin and bring to justice all parties found to be in violation of U.S. law by their participation in these efforts,” Perry wrote.

The letter earned him praise from the conservative blog Red State. “It appears that if Perry is elected President,” wrote one blogger, “the American left will no longer be allowed to spread their leftist agenda abroad in violation of U.S. law and in support of terrorist organizations.” The blogger also praised Perry’s refusal to stay the execution of Humberto Leal, an undocumented Mexican resident of Texas who was denied consular access when he was charged with the rape and murder an of a Texas girl. In so doing, Perry defied the entreaties of President Obama and U.N. officials, as well as the United States’ obligations under the Vienna convention, which calls for foreign nationals to be offered assistance from their home consulates when arrested abroad. Red State lauded Perry for resisting what it called “a clear attempt by the Obama administration to subordinate American laws and the legal system to international opinion and the scrutiny of foreign governments.”

Behind the scenes, Perry has apparently been seeking the advice of a number of prominent neoconservatives and nationalist hardliners. According to the National Review, Perry held a recent briefing with Douglas Feith and William Luti, neoconservative veterans of the Bush-era Office of Special Plans, the Pentagon intelligence center that churned out alleged misinformation about the connection between Saddam Hussein and al-Qaeda in advance of the Iraq War. The briefing apparently also included Andrew McCarthy, a National Review columnist and co-chair at the right-wing Foundation for Defense of Democracies. Even the often-hawkish New Republic called McCarthy “a crazy man” and wondered why Perry would take any advice from him. Topping it all off was the revelation by Politico that the meeting had been convened by former Secretary of Defense Donald Rumsfeld.

Of course, candidates often seek advice from anyone who will offer it, and Republican foreign policy voices will likewise offer it to any candidate who asks for it. But the Texas governor’s early moves suggest that a Perry administration would share much more with the Bush administration than a home state.