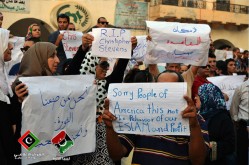 The deadly attack on U.S. diplomatic personnel in Libya raises a host of uncomfortable questions about the long-term ramifications of U.S. overseas interventions, the impact of Islamophobic media on U.S. international relations, and the ability of the United States to defend its diplomats in unstable or hostile environs.

It also calls into the question the efficacy of the NATO intervention in Libya, which left behind a weak central state and a fractious, violent political order susceptible to penetration by radical groups like the Omar Abdul Rahman Brigades, the al-Qaeda-aligned Libyan organization suspected of using protests at the U.S. mission as a pretext for carrying out the attacks.

The Mitt Romney campaign, however, has raised none of these issues. Instead—in language reportedly approved by the candidate himself—Romney fumed that it was “disgraceful that the Obama administration’s first response was not to condemn attacks on our diplomatic missions, but to sympathize with those who waged the attacks.” Despite withering bipartisan criticism of both the timing and the substance of the statement, the Romney campaign has refused to disavow it.

The remark was an apparent reference to a statement issued by the U.S. embassy in Cairo, where boisterous crowds had gathered to protest a bizarre anti-Islamic U.S. film that had been leaked to the Egyptian media. In language not vetted by Washington, the embassy staff condemned efforts to “hurt the religious feelings” of Muslims, which the Romney campaign construed as “an apology for our values.” Not only was the statement made in Cairo—not Benghazi, where the actual violence occurred amid similar protests—but it was issued hours before the U.S. personnel in Libya had been attacked.

Although some Republicans condemned the Romney campaign’s response as “craven” and “irresponsible,” a number of campaign surrogates and supporters took to the airwaves to double down. After repeatedly dodging a reporter’s questions about the timeline of the events (how could the administration be faulted, after all, for a statement issued before the violence had occurred?), Romney adviser Richard Williamson mused inanely that the occasion called for the president to “stand up for our values and [be] willing to lead from the front.” On Twitter, Donald Rumsfeld attributed the attacks to “perceived American weakness,” although presumably Twitter’s 140-character format left him no space to address the 12 embassy attacks that occurred during the last Bush administration.

But beyond a sordid new occasion for old “no apology” talking points, some observers have read baser motives into the Republican response. Romney’s remarks, wrote Adam Serwer, “don’t merely assign responsibility for the incident to, say, poor leadership or a failed foreign policy. Instead, Romney’s remarks suggest that Obama has very specific personal motivations: When violent religious radicals slaughter Americans, Obama is on the side of the radicals.” Serwer lumped the implications in with “a very well-developed narrative, popular on the fever swamps of the right where questions about Obama’s citizenship or faith linger” and likened them to attacks leveled by the conservative writer Dinesh D’Souza.

But if Romney kept such implications to a dog whistle, other Republicans raised them to a fever pitch. Republican National Committee chairman Reince Priebus, for example, tweeted that it was “sad and pathetic” that “Obama sympathizes with [the] attackers in Egypt.” Todd Akin, the Missouri Republican notorious for his insistence that women can’t get pregnant from “legitimate rape,” concluded simply that President Obama was “just apologizing because he doesn’t like America.” And after Obama called Libyan president Yusuf al-Magariaf to thank him for the Libyan government’s assistance in tracking down the perpetrators of the attack, FoxNews.com ran a story headlined “Obama Calls Libyan President to Thank Him after U.S. Ambassador Murdered.”

Amid the Beltway chatter, a new group of Libyans assembled outside the U.S. consulate in Benghazi holding signs condemning extremism and expressing remorse for the previous day’s violence. In an episode fraught with missed opportunities and debased rhetoric, they may be the only ones actually apologizing.