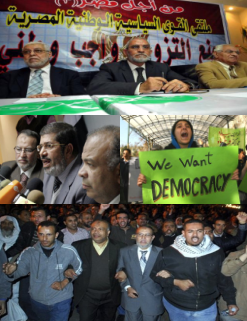 It has been nearly five months since an unprecedented civil uprising in Egypt toppled the three-decade rule of dictator Hosni Mubarak. Mubarak long enjoyed U.S. backing and military assistance for continuing his predecessor’s policies of maintaining a peace treaty with Israel and suppressing the country’s indigenous Muslim Brotherhood.

The Brotherhood, founded in 1928 by Hassan al-Banna, remains the world’s oldest and most influential Islamist organization, forming today a key component of the political opposition in Egypt, with offshoots in numerous Muslim countries. Following assassination attempts on members of Egypt’s leadership, the group was banned in the country for decades, during which time it subsequently renounced violence and committed itself to pursuing a Sharia-inspired political order through democratic means. The Brotherhood’s transformation into a religious, charitable, and democratic movement led to its rupture with more extreme Islamist groups like al-Qaeda, who deplored the group’s democratic participation, scorned its renunciation of violence, and resented its local, rather than global, commitment to “jihad.”

Despite the Brotherhood’s evolution, no sooner had the foundations of Mubarak’s autocratic rule begun to shake than conservative foreign policy voices in the United States began to raise alarm about the prospect of the Brotherhood coming to power in a post-Mubarak Egypt.

Andrew McCarthy, who has described the “Islamic” concept of freedom as “the opposite” of “reasoned self-determination,” noted that Mubarak “had his reasons” for being a tyrant, namely the threat of “jihadist terror.” In another deeply Islamophobic duo of articles, McCarthy portrayed the Obama administration’s very tentative engagements with the Brotherhood, coupled with its domestic security policies and acquiescence to Mubarak’s ouster, as indicative of Obama’s “infatuation” with the organization.

Ayaan Hirsi Ali, the well known Somali refugee who has served in the Dutch Parliament and is currently a fellow at the American Enterprise Institute, predicted that the Brotherhood would easily outmaneuver its lesser-organized political rivals and take power in Egypt. Like Michael Rubin, who claimed to see “the shadow of Iran's Islamic revolution in the Egyptian chaos,” Hirsi Ali compared Egypt of 2011 to Iran of 1979. Ayatollah Khomeini, she noted, “did not engage in terrorism,” but later took control of the country—implying that the Muslim Brotherhood harbors Iran-like designs for Egypt. More than fighting wars, she continues, “the bigger challenge may be to deal with those Islamists who are willing to play a longer game.” Achieving the rather improbable, Hirsi Ali likens the goals of the Brotherhood to both Ayatollah Khomeini and Osama bin Laden in the same article.

These writers and others draw on often decades-old Brotherhood proclamations, ignoring more recent developments and glossing over important generational and ideological cleavages within the organization, divisions that are likely to be amplified as Egypt attempts its democratic transition.

By advocating active U.S. support for factions opposed to the Brotherhood—a call echoed by House Foreign Affairs Chair Ileana Ros-Lehtinen (R-FL), who claimed that the group was “radical and violent” and said she was “deeply disturbed” by the Egyptian government’s recent legalization of the Brotherhood’s new political party—these commentators seek to place a U.S. finger on the scales of a nascent Egyptian democracy.

This tactic, however, could well backfire by pushing divisions within the Brotherhood to the background and increasing sympathy for the group among average Egyptians, who remember the all too recent U.S. support for the Mubarak autocracy. Further, by refusing to acknowledge any sincere commitment to democracy on the part of the Brotherhood, they imply that the group’s Islamism precludes its ability to function responsibly. In the minds of many Muslims, as noted by Brookings scholar Steven Kull, such talk amounts to an American contempt for Islam itself, as well as a distrust of Muslim voting publics—a distrust that they see manifested in multiple U.S. invasions of Islamic countries, among more mundane interferences.

So far the Brotherhood has failed to gather the overwhelming support of Egyptians; a recent poll noted that, while it gathered the largest single share of any party, its support topped out at a relatively meager 15 percent. In the same poll, less than 1 percent of Egyptians expressed support for an Iran-style political system.

To be a serious player in Egyptian politics, the Brotherhood will likely be forced to further moderate its message and to form political alliances, as evidenced by its somewhat surprising recent alliance with the liberal Wafd party, a secular and democratic organization whose roots go back to the years after World War I. The move may be purely tactical, but it’s emblematic of parties who acknowledge the realities of democratic politics. If Egyptian democracy is to succeed, its parameters must be set by Egyptians and their political representatives—not by rightwing American commentators.

Who are some of these folk hyping the Brotherhood “threat”? And what have others said about these concerns?