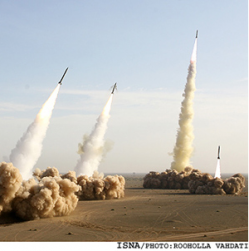 When the International Atomic Energy Agency released its report this week claiming “credible” evidence that Iran has been seeking to develop a nuclear weapon since at least 2003, the responses of right-wing demagogues were predictable, if alarming.

The narrative was simple, echoing an old trope most recently rehashed after the United States claimed to have foiled an Iranian assassination plot in Washington: sanctions have failed, Iran will never “respond” to diplomacy, and war is the only option. “Diplomacy has never resolved problems with Iran,” writes Michael Rubin of the American Enterprise Institute. “Only overwhelming pain will convince the supreme leader that the Islamic Republic cannot shoulder the costs of his quest.” (Rubin once wrote to Right Web complaining that we unfairly accused him of wanting to attack Iran.)

Rubin’s apparent bloodlust might seem marginal in a less toxic diplomatic environment. But his comments come amid a flurry of anti-Iranian posturing in Washington as well as Tel Aviv, where factions of Netanyahu’s cabinet have reportedly been pressing for a unilateral strike on Iran. Defying the Israeli government’s official silence in response to the report, Defense Minister Ehud Barak insisted that Israel could attack Iran and suffer “not even 500” casualties, and President Simon Peres remarked earlier this week that "The possibility of a military attack against Iran is now closer to being applied than the application of a diplomatic option.”

Meanwhile in Washington, while neoconservative commentators were preparing their remarks that diplomacy doesn’t work with Iran, members of Congress were setting about ensuring that it wouldn’t. Led by the hard-right Rep. Ileana Ros-Lehtinen (R-FL), the House Foreign Affairs Committee advanced last week a harsh sanctions bill that would effectively criminalize most contact between U.S. diplomats and Iranian officials. Paul Pillar noted at the National Interest that the bill “would prevent any exploration of ways to resolve disagreement over that Iranian nuclear program that we are supposedly so intensely concerned about,” concluding that it “vividly illustrates how mindless the pressuring and isolation of Iran has become.” Another bill passed by the committee would impose stringent sanctions on Iran’s central bank, something Iran previously said it would consider an act of war.

Even the United Kingdom is reportedly preparing plans to attack Iran.

Although a few doubts have been raised about the report’s findings and implications, John Glaser has ventured a possible rationale for Iran’s nuclear ambitions: namely, the U.S. has invaded and occupied the countries to Iran’s east and west, continues to run warships in the Persian Gulf, has cultivated client states hostile to Iran, and has waged a covert campaign of assassination and cyber warfare against the country. “In such an environment,” Glaser asks, “why wouldn’t the Iranian government want a nuclear weapon?”

Still, Mark Dubowitz of the neoconservative Foundation for Defense of Democracies told Washington Post blogger Jennifer Rubin that “no one can reasonably argue that countries threatened by Iran have not tried all peaceful alternatives.”

Well, by that measure of “peaceful,” all but one.