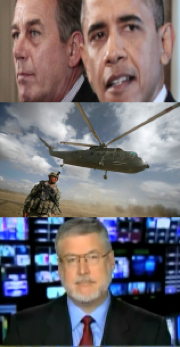 Generally defined by their foreign policy proclivities, neoconservatives’ ideas on economics rarely get discussed. However, as evidenced from a cursory glance at the debt ceiling coverage featured in Commentary, the Weekly Standard, or the American Enterprise Institute blog, neocons generally tend to lean to the right on matters of social spending and government debt. Nevertheless, they have a diverse range of opinion on the matter – Marc Thiessen of AEI and the Washington Post, for example, favors the Boehner plan, while William Kristol has heaped praise upon “Cut, Cap, and Balance.”

There is, however, a common thread. If Republicans like Rep. Paul Ryan or members of the Tea Party Caucus can be accused of leveraging tax breaks for the wealthiest Americans on the backs of the most vulnerable, for neoconservatives the ultimate budgetary goal is something else: unrestricted funding for the U.S. military and its sundry foreign adventures.

Jamie Fly, a former adviser to President George W. Bush and the executive director of the Foreign Policy Initiative, recently penned an op-ed in the National Review to this effect. “The American people,” he writes, will not reward Republicans “who are willing to sacrifice our national security rather than make tough political decisions about runaway domestic discretionary spending and entitlement programs.” He praises Speaker John Boehner’s debt ceiling proposal for “avoid[ing] significant defense cuts, making it the best option for conservatives concerned about U.S. national security.”

Perhaps more interesting is the role of David Addington, one of the country’s foremost foreign policy hawks—if not outright neocon. Currently coordinator of domestic and economic policy at the Heritage Foundation, Addington is probably best known for helping craft the so-called torture memos, as well as his role in developing the Bush administration’s rationale for the warrantless wiretapping of U.S. citizens.

Addington famously avoided the media during his tenure in the Bush administration, but on the debt ceiling he has aggressively and publicly pushed a tea party line in opposition to the Boehner plan and in favor of the Cut, Cap, and Balance approach. “Debt limit legislation,” he wrote at the Foundry blog, “should drive down federal spending on the way to a balanced budget, while preserving the ability to protect America, and without raising taxes.” Translation: current military spending should be preserved with massive cuts to U.S. social services.

Notably, Addington rejects the notion that the Obama administration has the constitutional authority to bypass congressional oversight of the U.S. debt limit, the so-called “14th Amendment option.” The irony was not lost on the National Journal, which opined : “Addington, as strong a proponent of unbridled executive branch authority as can be found in either party, is now in the strange position of supporting lawmakers trying to bind a president’s hand.”

While such posturing no doubt reflects the economic conservatism that foreign policy hawks often share, it is also colored by neoconservatives’ tacit acknowledgment that the U.S. military budget will likely be curtailed in the coming years—and along with it the blank check for unbridled power projection in the Middle East and beyond. Some on the right see this already taking place. In a factually dubious op-ed for the Wall Street Journal, George Melloan writes, “The U.S. is busted. That's not primarily because of its foreign policy engagements, which have been a good investment. It is mainly because America's political leaders have overburdened the productive sector with social obligations that cannot be fulfilled.”

Of course, according to the Center on Budget and Policy Priorities, the wars in Iraq and Afghanistan are one of the largest single drivers of U.S. debt—after the Bush tax cuts and the economic downturn.

Melloan continues, “Sadly, when budgets are stretched, U.S. politicians usually don't menace entitlements, which buy votes. Instead they look to cut military and foreign policy expenditures.” This too overlooks the fact that Pentagon spending has increased every year since 1998 and now sits at more than twice its 2001 level.

Republicans have won a remarkable number of concessions from Washington Democrats on the debt ceiling issue. But neoconservatives’ paranoia on the military budget and the foreign policy it funds remains unassuaged. Their willingness to grasp at straws is perhaps best encapsulated by Rubin’s previous pitch for defense spending: the need to combat “Islamic” terrorism of the type witnessed in Oslo.