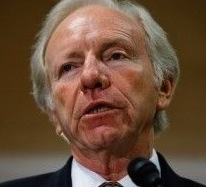 Sen. Joseph Lieberman, the lame duck “Independent Democrat” from Connecticut closely allied to neoconservative advocacy groups, has reportedly become the first U.S. senator to call publicly for military intervention in Syria. "I'd like to see us begin to consider some safe zones inside Syria, particularly along the Turkish and Jordanian borders," said Lieberman. When asked by Foreign Policy’s “The Cable” on Tuesday if that meant he favored a no-fly zone, he replied, “I’d be in favor of that, yes.” While so far no other U.S. lawmakers have called openly for armed intervention in Syria, Lieberman’s remarks parallel a growing chorus of voices pushing for a “stronger response” to the Syrian crackdown by Washington.

Lieberman’s statement came shortly after the joint Russia-China veto of a Security Council resolution calling on Syria to end its crackdown and release its political prisoners. Russia and China cited the resolution’s contingency that the Security Council would “consider its options” after 30 days of Syrian noncompliance, observing that such language represented a veiled reference to the kind of sanctions that preceded the Libya intervention. Brazil, India, South Africa, and Lebanon similarly abstained from voting.

Shortly after the veto, U.S. Ambassador Susan Rice delivered what the New York Times called “one of her most bellicose speeches in the Council chamber,” with Rice declaring that “the people of the Middle East can now see clearly which nations have chosen to ignore their calls for democracy and instead prop up desperate, cruel dictators.” Rice’s outrage prompted an editorial from the right-wing Wall Street Journal, which wondered, “Why, except for reasons of masochism or moral abdication, does the Obama administration insist on obtaining a symbolic and toothless UN resolution? … Maybe once the lesson delivered at the UN this week sinks in, the Obama administration might take further steps to oust Mr. Assad.”

The veto came on the heels of a long-delayed U.S. Senate vote to confirm Robert Ford as the U.S. ambassador to Syria. No longer viewed as a “concession” to the Syrian regime, an increasing number of hawks have come to appreciate Ford’s high-profile confrontations with the Syrian government over its crackdown on pro-democracy demonstrators.

However, with Ford pushing hard against the regime in Syria (and therefore increasingly unlikely to broker any moderation on the part of Damascus), and with the UN Security Council tied up over the issue of sanctions, neoconservative advocates of regime change are increasingly likely to declare that diplomatic responses to the Syrian government have been exhausted—a well-worn path on the way to justifying various other U.S.-led wars. Senator Lieberman will likely not be the last lawmaker to call for war in Syria, and the Wall Street Journal has probably not issued its final shot over the bow either.