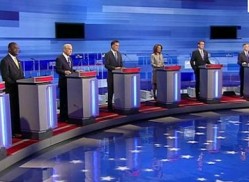 The GOP presidential candidates, almost without exception, have displayed remarkably tone-deaf attitudes regarding the imminent U.S. withdrawal from Iraq, while revealing a near-unanimous desire to make Iran the next target of U.S. military intervention, doubtless making their myriad neoconservative Machiavellis proud.

In a chorus described by Washington Monthly’s Steve Benen as “completely tone deaf,” the Republican Party’s 2012 presidential contenders have unanimously criticized the Obama administration’s announcement that the last U.S. combat troops would leave Iraq by the end of 2011.

Among the highlights in a recent National Review round up of the candidates’ responses: Mitt Romney’s argument that the withdrawal amounts to an “astonishing failure to secure an orderly transition in Iraq”; Michele Bachmann statement that “President Obama’s decision represents the end of the era of America’s influence in Iraq and the strengthening of Iran’s influence in Iraq with no plan to counter that influence”; Jon Huntsman claim that “the president’s inability to reach a security agreement leaves Iraq vulnerable to backsliding, thus putting our interests in the region at risk”; and Rick Perry’s hand-wringing about being “deeply concerned that President Obama is putting political expediency ahead of sound military and security judgment.”

Elsewhere, Newt Gingrich flip-flopped between claiming that the “the president is right” and lamenting that the announcement “will be seen by historians as a decisive defeat for the U.S. in Iraq.” Rick Santorum, who also accused Obama of having "tacitly supported … Ahmadinejad and the mullahs” during the 2009 protests in Iran, lamented that “the Iranians now have more sway over the Iraqi government than the United States.” Herman Cain, meanwhile, left unchanged his assessment that “withdrawals from Iraq and Afghanistan were ‘a dumb thing to do.’”

But if the candidates were concerned about Iran’s influence in the Middle East—a development hardly new to the Obama administration—they nevertheless seem to have a (military) solution. “Option A,” Herman Cain has said, “is, 'Folks, we are not going to allow [Iran] to attack Israel.’ If they call my bluff, they already know—they will know—what Option B is.” Cain has also called for placing U.S. weapons systems in the Persian Gulf, encouraging Iranian President Mahmoud Ahmadinejad to “make my day.” In more tempered language, Mitt Romney has proposed something arguably more aggressive, advocating the placement of a U.S. naval carrier force in the eastern Mediterranean and the Persian Gulf “to deter would-be aggressors” there.

Michele Bachmann—whose congressional Tea Party Caucus previously endorsed an Israeli military strike on Iran—has charged that Iran “fail[s] to respect the U.S. and our presence” in the Middle East, pledging that she would “take everything at our disposal to make sure that Iran does not have a nuclear weapon.” Jon Huntsman, typically less hawkish than his GOP colleagues, has nonetheless echoed this sentiment. "I cannot live with a nuclear-armed Iran,” he told a New Hampshire audience. “If you want an example of when I would use American force, it would be that.”

Newt Gingrich has been perhaps the most explicit about Iran. Arguing that Tehran has been "waging war against us since 1979," Gingrich has explicitly espoused an emphatic regime-change line, telling CNN, "Our goal should be the replacement of the Iranian dictatorship."