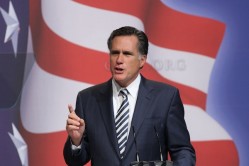 Late last week, former Massachusetts Governor Mitt Romney delivered a high-profile address on foreign policy at the Citadel in South Carolina. Shortly before the address, he released an extensive listing of his foreign policy advisors and a white paper discussing his views in greater detail.

Although he has been cast by the media as representing a relatively moderate business wing of the Republican Party vis-à-vis his tea party rivals, Romney has revealed himself to be heavily influenced by political factions, like the neoconservatives, who promote fantastical notions about American power and exceptionalism. Romney’s advisors include prominent Iraq war architects and other Bush-era hardliners, including Elliot Cohen, Michael Chertoff, and Dan Senor, as well as leading neocon opinion makers like Robert Kagan. Indeed, as noted by Jim Lobe of Inter Press Service, with Kagan, Senor, and Eric Edelman on board, Romney has netted three of the four board members of the Foreign Policy Initiative, a successor organization to the influential Project for a New American Century—perhaps explaining his speech’s repeated references to the need for the 21st century to be “an American century.” Also listed was Walid Phares, a well-known Islamophobic commentator previously involved with the right-wing Phalanges militia in Lebanon, which committed numerous atrocities against Lebanon’s Palestinians and Muslims during the country’s civil war. Quipped one observer: “It seems unlikely that Romney knew much about this chapter in Phares’ career when he tapped him as an advisor.”

On balance, Romney’s declarations have been described as light on detail—limited mostly to his support for an even bigger defense budget and a bigger navy—and heavy on exceptionalist rhetoric, which Lobe says borders on “messianic.” "God did not create this country to be a nation of followers," said Romney. "America is not destined to be one of several equally balanced global powers. America must lead the world, or someone else will."

Some neoconservative commentators did note the paucity of policy detail. Danielle Pletka of the American Enterprise Institute, while rating the speech good overall, expressed concerns about Romney’s wishy-washy statements on Afghanistan and said his remarks about Pakistan had “no clarity at all.” Pletka’s AEI colleague Marc Thiessen agreed, calling Romney’s address “very good” but containing “not a word about ‘victory’ or even ‘success’ in Afghanistan.”

In general, however, prominent neoconservative writers lauded Romney for his affirmations of exceptionalist rhetoric, contrasting Romney’s approach with that of President Obama or of more isolationist-minded Republicans. Commentary’s Jonathan Tobin, for instance, wrote that while “[s]ome on the left will deride Romney’s speech as a rerun of the neoconservatism of the George W. Bush administration,” the speech proved that “belief in a strong foreign policy and a willingness to defend American values and allies is still the mainstream position in the GOP.” Also writing at Commentary, Max Boot called Romney’s statements “a classic ‘peace through strength’ foreign policy broadly in line with the foreign policy of Republican presidents from Ronald Reagan to George W. Bush.” Similarly, Washington Post blogger Jennifer Rubin praised Romney’s white paper for “devising a roadmap” out of the “weakness and moral confusion that have been the hallmarks of the Obama years.”

Of course, asserting America’s greatness is a dubious solution to the sundry U.S. foreign policy quagmires around the world. But with the implosion of Rick Perry’s campaign and widespread popular fatigue for U.S. wars, leading U.S. neocons may feel like they’ve caught a break with Romney. They’ll only have to hope he doesn’t change his mind.