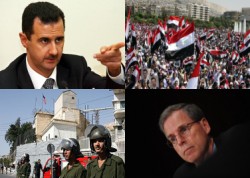 The U.S. ambassador to Syria, one Robert Ford, is by all accounts a mild-mannered and agreeable diplomat, unaccustomed to the spotlight and more sedate than seditious. But it is Ford’s visit to Hama that has most dramatically captured the Obama administration’s growing antipathy toward the regime of Bashar al-Assad. Ford, later joined by the French ambassador, was reportedly received with rose petals and olive branches by citizens of the restive city, a hotbed of Syrian resistance where thousands of people were killed when Assad’s father put down an Islamist uprising there in 1982. Some in the opposition and the Obama administration have credited the visit with preventing a repeat performance of the massacre, though this of course remains to be seen.

The embassy raids have simultaneously softened some neoconservatives’ resistance to stationing Ford in Syria and hardened their calls for further action against the Syrian regime.

Few in the GOP have questioned Ford’s credentials, which include two diplomatic stints in Baghdad. But most Washington Republicans opposed Ford’s appointment to Syria, a post that had been vacant since 2005, when President Bush recalled the U.S. ambassador in protest of Syria’s alleged role in the assassination of Lebanese Prime Minister Rafik Hariri; indeed, Ford’s assignment is only temporary, as President Obama was only able to install him by recess appointment. The administration argued at the time that the appointment of an ambassador would enable to the United States to engage the country diplomatically, potentially leveraging its assistance in breaching the Israeli-Palestinian impasse.

Instead, Ford has served as a mouthpiece for Washington’s growing impatience with Assad, and his boldness has met with plaudits from many on the right. Moe Lane, appearing on RedState, wrote that he’s “starting to think that the current Republican opposition to Ford’s formal appointment…may be counterproductive,” since Ford is “telling [the Syrian regime] things they don’t like to hear.” Similarly, Elliott Abrams wrote that if Ford either continues his criticism of the regime or else is recalled in protest, he could “become a symbol of resistance to tyranny.”

Not everyone has been assuaged, of course. James Phillips, writing at the Heritage Foundation’sblog, has declared that “the Administration’s timid and weak policy toward Syria has emboldened the Assad regime to attack the U.S. embassy.”

It may be that the Obama administration was seeking to rebuff criticism of its overtures to Assad by boldly dispatching the ambassador to Hama – thus impressing neoconservative critics and providing space for continued engagement. But the subsequent embassy raid precipitated a marked escalation of the administration’s hostility toward the regime. Dispensing with the relative caution of her earlier statements, Secretary of State Hillary Clinton threatened that “President Assad is not indispensable, and we have absolutely nothing invested in him remaining in power,” adding that “he has lost legitimacy.” While she stopped short of calling explicitly for his ouster, such language preceded the administration’s previous breaks with Egyptian president Hosni Mubarak and Yemeni president Ali Abdullah Saleh.

The raid provoked an even fiercer reaction from neoconservatives. Commentary’s Jonathan Tobin called for the United States “to answer this provocation,” adding menacingly, “in a manner the Syrians will understand. If they do not act now to convince the Syrians to back down, the cost to the West and its friends may be measured in blood rather than broken glass.” Tobin does not specify what he means by “act now,” but he does call attention to “the inconsistency” of Obama’s taking a relatively measured approach to Syria “while going to war over much the same issue in Libya.” Invoking Syria’s alliances with Iran, Hamas, and Hezbollah, Tobin demanded that the “administration [demonstrate] that Iran and its allies will not bully it.”

Others, like Andrew Tabler of the neoconservative and AIPAC-linked Washington Institute for Near East Policy, have called explicitly for new sanctions on the regime. But Joshua Landis of Syria Comment has warned that “there’s a slippery slope” from sanctions “toward military intervention, because sanctions alone can’t overturn the regime.” Certainly in the case of Iraq, the U.S. invasion was decreed necessary by dint of the sanctions regime’s failure to make a docile dictator out of Saddam Hussein.

Regime change has indeed long been the neoconservative policy of choice for Syria as well, an issue intrinsically linked to their even greater enthusiasm for such change in Iran. Reuel Marc Rerecht of the Foundation for Defense of Democracies has called the Syrian crisis “an easy call” and “a chance to eliminate one of America’s worst enemies in the region.” He called Syria “the linchpin of Iran’s alliances and terrorist apparatus.” Similarly, Michael Ledeen, in a post endorsing the foreign policy of GOP presidential candidate Tim Pawlenty several days before Ford’s trip to Hama, linked regime change in Syria to “the ultimate goal” of regime change in Iran. It is thus difficult to divorce the ostensible neoconservative sympathy for Syrian demonstrators from their broader agenda of force projection in the region.

It is entirely possible that the Obama administration may soon recall Ford and pull the rug out from its tacit (if reluctant) support for Assad; alternately, it may use the incident to prove Ford’s worth to his domestic critics and continue to quietly engage the dictator. Whatever the case, the administration has considerably less leverage in Syria than it does in other countries experiencing upheavals. It isn’t likely to gain any, however, from counseling the advice of Washington’s neoconservatives, which bends implicitly toward further violence and war.