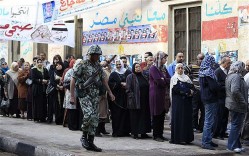 Egypt’s path toward democracy has been neither steady nor assured since its uprising last year. However, as the country prepares for a presidential election campaign—which follows on the heels of its Islamist-dominated parliamentary elections several months ago—it finally appears set to install its first-ever fully democratically elected government.

But the neoconservatives, purportedly champions of democracy and human rights, are finding this turn of events hard to swallow. For example, Jonathan Tobin, editor of the “Contentions” blog at Commentarymagazine, is incensed about the Muslim Brotherhood’s decision to nominate a candidate despite its earlier pledge abstain from the race—and he finds the Obama administration somehow at fault. Noting that the administration has quietly backed the Brotherhood’s candidate over a more extreme Salafist nominee (who now appears to have eligibility issues), Tobin writes that “this U.S. tilt toward the Brotherhood is just the latest of a series of inept moves that has destroyed American influence in Egypt.”

He adds, “Should the Brotherhood candidate for president succeed, it would create a dangerous situation in which this Islamist party would control both the executive and the parliament. This would place intolerable pressure on the army—which remains the sole force in the country that could act as a check on the Islamists—to back down and allow the Brotherhood untrammeled power.”

Echoing the charges of former GOP candidate Michele Bachmann and the previously marginal Rick Santorum, Tobin flatly declares, “Obama abandoned Hosni Mubarak last year. With our embassy now backing the Brotherhood, secularists and the army must assume the president means to ditch them, too.”

In a subsequent post, Tobin sums up his critiques of the Obama administration’s Egypt policy in a rambling series of accusations: “It refused to promote democracy or human rights while Hosni Mubarak still ruled,” he writes, “but then compounded that error by quickly dumping Mubarak. It repeated that pattern by seeking to attack the military government that succeeded Mubarak and then appeased them by continuing the aid in the face of provocations. Now, it has put its chips on the Brotherhood even though there is still a chance it can be stopped.”

Tobin doesn’t explain how a more U.S.-friendly democracy would have emerged under the aegis of a U.S.-backed dictatorship, nor does he see the apparent contradiction in knocking the Obama administration for “dumping” Mubarak even as his own publication frequently complains about Russia’s continued support for the autocratic Bashar al-Assad in Syria. One could be forgiven, moreover, for suspecting that Tobin is advocating the subjugation of a nation of 80 million people for the sake of Israel’s subjective sense of security.

The substance of Tobin’s critique ultimately has less to do with the Obama administration’s choice of candidate, which is clearly a bid for what must seem to Washington as the safest bet, but rather with the administration’s apparent acquiescence to the likely choice of Egyptian voters. What Tobin calls the Brotherhood’s bid for “untrammeled power” is really just its decision to field a candidate for a democratic election—something that less interventionist commentators would concede is any party’s right in an emerging democracy—and he laments that the country’s unelected military leaders should be constrained to share power with an elected civilian faction he finds distasteful.

Tobin’s dirge for military rule illuminates the ongoing confusion on the neoconservative right about how best to respond to democratic uprisings in a region governed for decades by U.S.-backed autocrats — a divide that dates back to Jeanne Kirkpatrick’s 1970s-era thesis that right-wing “authoritarian” governments are more amenable to democratic reform than left-wing “totalitarian” states. While the likes of Tobin, Frank Gaffney, and Caroline Glick have made pleas for the region’s anciens regimes (and while FDD's Andrew McCarthy has accused the Obama administration of "rain[ing] down a billion-and-a-half more American taxpayer dollars" on the Brotherhood in the form of aid to Egypt) , former Bush administration neocons like Elliott Abrams and Zalmay Khalilzad have imprudently suggested that the uprisings somehow vindicate the Bush administration’s “freedom agenda” of democratization by force.

If Tobin is so concerned about U.S. “influence” in Egypt, he might do well to reconsider whether turning its back on Egypt’s broadly backed political forces and advocating a return to a loathed military dictatorship is the best way forward.