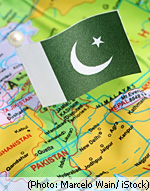 A missile strike on March 16 by an unmanned U.S. drone inside Pakistan’s terrorist-infested tribal areas shows Washington’s increasing frustration with the growing clout of pro-Al Qaeda Taliban in the border region and Pakistan’s inability to crush or contain them. 1 The unilateral, unacknowledged aerial attack, which killed 20 people, some of them suspected militants, came a day after four Islamabad-based FBI agents were injured in an explosion in a restaurant. 2

Both incidents indicate an all-round failure of the Bush administration’s post-9/11 counterterrorism policy, an immutable tenet of which has been to rely on Pakistani President Pervez Musharraf and beef up the Pakistani military’s capacity to curb terrorism. After the political party backed by Musharraf overwhelmingly lost in Pakistan’s February general election, Washington declared itself prepared to work with whatever government emerges. That does not, however, mean any change in the Bush administration’s agenda. Lip service to “democracy promotion” in the country will continue apace, while millions more dollars in U.S. military aid will still flow into the South Asian nation, despite the fact that billions so far have done nothing to stop the spread of terrorism.

In fact, security in Pakistan seems today to be worse than it was before the events of 9/11. According to a report by the Pak Institute for Peace Studies, "Pakistan is next to Iraq in terms of casualties of terrorism." In 2007, the Institute recorded 1,442 terrorism-related violent incidents, causing nearly 9,000 casualties—3,448 of them fatal, a 492 percent increase from 2005. 3

This year has been equally violent with rocket and suicide attacks against military and civilian targets happening with frightening frequency. On the same day that Musharraf met with Chairman of the Joint Chiefs Adm. Mike Mullen in Islamabad in order to discuss matters of counterterrorism, two suicide bombers killed at least four people by detonating explosives in front of the Pakistan Navy War College in Lahore. 4 Instead of bringing peace, the many years of Pakistani military operations have yielded a spiraling instability in the region.

Ironically, the recent surge in attacks and counter-attacks has come precisely when Deputy Secretary of State John Negroponte was envisioning new methods of minimizing U.S. engagement. “In mid-March,” Negroponte said in his written testimony before the Senate’s Foreign Relations Committee last month, “we and our Afghan, Pakistani, and Coalition partners will open the first of six planned Border Coordination Centers at Torkham, Khyber Agency [in Pakistan’s tribal area]. The Centers will make it possible … to coordinate more effectively to stop the enemy from skirting both sides of the rugged border to avoid engagement.” 5

Although the United States continues to pour funds into improving Pakistan’s security situation in order to stabilize the region, at the February 5 Senate Select Committee on Intelligence hearing on the Annual Worldwide Threat Assessment, it seemed clear that such efforts have failed. Sen. John Rockefeller (D-WV) said: “Al Qaeda operates in a terrorist safe haven along the Afghanistan-Pakistan border from which it trains and directs terrorist cells, perhaps with more confidence than ever. Al Qaeda has used this border safe haven to reconstitute itself and launch offensive operations that threaten to undo the stability of Afghanistan and undermine, if not overthrow, the Pakistan government. And tragically, like before 9/11, al Qaeda was once again secured a base of operation from which to plot and direct attacks against the United States.” 6

Director of National Intelligence Adm. Michael McConnell, who is responsible for the assessment, testified that, “Al Qaeda remains the preeminent terror threat against the United States, both here at home and abroad. Despite our successes over the years, the group has retained or regenerated key elements of its capability, including its top leadership, operational lieutenants and a de facto safe haven, as was mentioned by the chairman, in the Pakistani border area with Afghanistan known as the Federally Administered Tribal Areas or FATA.” 7

Speaking at the same hearing was Randall Fort, the assistant secretary of state for intelligence who heads the Bureau of Intelligence and Research (INR). Concurring with McConnell’s testimony, he reaffirmed the commitment of Condoleezza Rice’s State Department to pursuing non-military measures. “It is because of our firm belief in the potential of diplomacy that we strive to achieve peace in the Middle East, that we can imagine a better relationship with a nuclear-free North Korea, that we envision stable democracies in Iraq and Afghanistan, and that we aid Pakistan in its struggles to root out extremism,” he said.

As part of those efforts to “aid Pakistan in its struggles,” it was disclosed in early March that the U.S. Army is “developing a plan to send about 100 American trainers to work with a Pakistani paramilitary force that is the vanguard in the fight against Al Qaeda and other extremist groups in Pakistan’s restive tribal areas.” 8

One of the nightmare scenarios the U.S. aid is designed to prevent is Al Qaeda acquiring a nuclear weapon. Such alarmist concerns have helped spur some writers, in particular those at the neoconservative think tanks whose scholars have helped shape many of the Bush administration’s security policies, to push for U.S. military intervention in Pakistan. Reuel Marc Gerecht of the American Enterprise Institute recently wrote, “If Washington is reluctant to launch paramilitary strikes into northwestern Pakistan to kill members of Al Qaeda, it definitely isn’t going to launch covert operations to neutralize Pakistan’s nuclear weapons in the event the Pakistani army becomes too Islamic.” 9 What “too Islamic” means exactly, Gerecht fails to explain.

Despite the backdrop of an all-time high of incidents of terrorism in Pakistan, promoting the improbable terrorist-with-nuke scenario merely distracts from the real and present dangers in Pakistan. The policy pushed by rightist think-tanks and adopted by the Bush administration to assist the army to ensure safety and security of Pakistani nuclear weapons goes not only against the goal of nonproliferation, but also amounts to rewarding a nuclear proliferator. (The Bush administration has similarly rewarded two other nuclear powers that are not party to the Nuclear Nonproliferation Treaty, India and Israel.)

A case in point is the recently revealed U.S. program to secure Pakistan’s nuclear materials and facilities at the cost of nearly $100 million over the course of six years. According to the New York Times, “The aid, buried in secret portions of the federal budget, paid for the training of Pakistani personnel in the United States and the construction of a nuclear security training c

enter in Pakistan, a facility that American officials say is nowhere near completion, even though it was supposed to be in operation this year.” 10

Such a program was promoted by one scholar at the rightist Heritage Foundation . Lisa Curtis wrote in a July 2007 policy brief, "The U.S. should seek to implement programs that help improve safety and security at [Pakistani] nuclear facilities." 11

But aid aimed merely at securing nuclear materials seems to miss the point. Instead of spending millions of dollars and many years of effort on Pakistan’s nuclear safekeeping, Washington’s time and money would be better used to persuade Pakistan’s entrenched nuclear-military establishment to let go of its nuclear weapons entirely and concentrate on fighting terrorism. Clearly, the best way to keep Pakistan’s nuclear weapons out of the hands of terrorists is to rollback the nuclear weapons program. Given the nature of threat to Pakistan and its economic woes, the sheer financial cost of the weapons project, not counting the U.S. money, is a burden on the country’s impoverished people. Rather than trying to prevent theft of these weapons, the focus should be on nuclear disarmament, leaving resources free to deal with other causes of extremism and militancy. Going nuclear-free would also help to build Pakistan’s tarnished image in the international community.

Najum Mushtaq is a contributor to PRA’s Right Web (https://rightweb.irc-online.org)