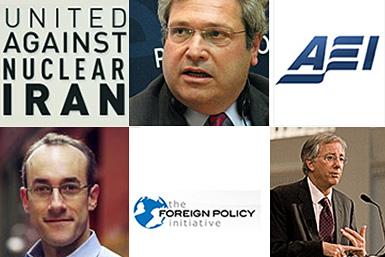 Neoconservative Resurgence in the Age of Obama
By Daniel Luban

Despite their political plunge, neoconservatives—and the think tanks that sustain them—have been surprisingly skilled at reinventing themselves and forcing the Obama administration to give them a seat at the table. They have choreographed a clever “carrots and sticks” dance—throwing support behind the president when he has taken positions compatible with their dogma, and excoriating him when he has contravened it. They have also proved adept at making alliances with the liberal interventionists, like those at the Center for a New American Security, who are strikingly influential in and out of the Obama administration. Read full story.

Newt Gingrich
AEI fellow and former House Speaker Newt Gingrich is enjoying a splashy media comeback as a harsh and vociferous critic of the new administration.

Eliot Cohen
A neocon admired by some liberal hawks, Cohen disparages the Obama administration’s pursuit of diplomacy as shallow and merely an effort not to be like Bush.

Stephen Hadley
His tendency to play loose with the facts while a top official in Bush’s National Security Council has not dampened Hadley’s marketability. He now commands lucrative fees through a high-profile speakers bureau.

The close alignment of some Republican Party stalwarts with Israel’s rightwing government signals a significant political shift on the Israeli-Palestinian conflict.

Under Pressure from Hawks, Obama Tacks to the Right
By Daniel Luban | Posted: August 19, 2009

Apparently in response mounting pressure from hawks, the Obama administration is moving toward a harder line on Iran.

Special Envoy Richard Holbrooke told an audience at the Center for American Progress that when it comes to U.S. civilian efforts in Afghanistan, concepts of victory and defeat are irrelevant.

Right-wing commentators are furiously working to discredit the liberal J Street organization, which lobbies for a two-state solution in Israel-Palestine, because a tiny percentage of its donors have Arab or Muslim names.

U.S. and UK forces in Afghanistan’s Helmand province are working to bring back the provincial police. But there is a big problem: Not only are the police linked with a local warlord, they’ve committed horrific abuses.