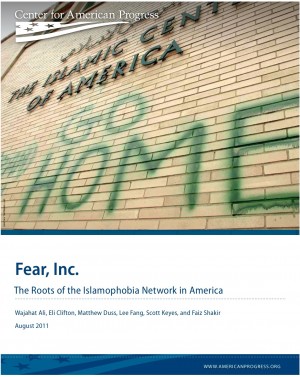 A small group of inter-connected foundations, think tanks, pundits, and bloggers is behind the 10-year-old campaign to promote fear of Islam and Muslims in the U.S., according to a major investigative report released August 26 by the Washington-based Center for American Progress (CAP).

The 130-page report, ‘Fear, Inc.: The Roots of the Islamophobia Network in America’, identifies seven foundations that have quietly provided a total of more than 42 million dollars to key individuals and organisations that have spearheaded the nation-wide effort between 2001 and 2009.

They include funders that have long been associated with the extreme right in the U.S., as well as several Jewish family foundations that have supported right-wing and settler groups in Israel.

The network also includes what the report calls "misinformation experts" – including Frank Gaffney of the Center for Security Policy (CSP), Daniel Pipes of the Philadelphia-based Middle East Forum (MEF), Steven Emerson of the Investigative Project on Terrorism, David Yerushalmi of the Society of Americans for National Existence, and Robert Spencer of Stop Islamization of America (SIOA) – who are often tapped by television news networks and right-wing radio talk shows to comment on Islam and the threat it allegedly poses to U.S. national security.

"Together, this core group of deeply intertwined individuals and organisations manufacture and exaggerate threats of ‘creeping Sharia’, Islamic domination of the West, and purported obligatory calls to violence against all non-Muslims by the Quran," according to the report whose main author, Wajahat Ali, described the group as "the central nervous system of the Islamophobia network."

"This small band of radical ideologues has fought to define Sharia as a ‘totalitarian ideology’ and legal- political-military doctrine committed to destroying Western civilization," the report said. "But a scholar of Islam and Muslim tradition would not recognise their definition of Sharia, let alone a lay practicing Muslim."

Nonetheless, the group’s messages receive wide dissemination by what the report calls an "Islamophobia echo chamber" consisting of leaders of the Christian Right, such as Franklin Graham and Pat Robertson, and some Republican politicians, such as presidential candidates Representative Michele Bachmann and former Speaker of the House of Representatives Newt Gingrich.

Other key disseminators include media figures, especially prominent hosts on the Fox News Channel and columnists in the ‘Washington Times’ the ‘National Review’; as well as grassroots groups, such as ACT! For America, local "Tea Party" movements, and the American Family Association, which are behind current efforts by Republican-dominated state legislatures to ban Sharia in their jurisdictions.

The report also cited the Middle East Media and Research Institute (MEMRI), a press-monitoring agency created here in 1998 by former officers in the Israel Defence Force that translates selected items from Middle Eastern print and broadcast media, as a key part of the broader network, providing it with material to bolster its claims regarding the threat posed by Islam. MEMRI, which has just been awarded a State Department contract to monitor anti-Semitism in the Arab media, has often been accused of selectively spotlighting media voices that show anti-western bias and promote extremism.

Judging by recent polls, the network has proved remarkably successful, according to the report which cited a 2010 ‘Washington Post’ poll that showed that 49 percent of U.S. citizens held an unfavourable view of Islam, an increase of ten percent from 2002.

The same network also succeeded in inciting a national controversy around the proposed construction of an Islamic community centre in Lower Manhattan – the so-called ‘Ground Zero Mosque’ – which, according to Gaffney and others, was intended celebrate the 9/11 attack on the World Trade Center and "to be a permanent, in-our-face beachhead for Sharia, a platform for inspiring the triumphalist ambitions of the faithful."

"It’s remarkable what a small number of people have achieved with a small group of committed and generous donors," said Eli Clifton, a co-author of the report and a national-security reporter at CAP, a think tank which is close to the administration of President Barack Obama, who has himself been a prime target of the Islamophobic network.

The report, which was funded by the financier George Soros’ Open Society Institute (OSI), comes at a particularly sensitive moment – just two weeks before the tenth anniversary of 9/11 and less than a month after the murders of 76 people in Norway by Anders Breivik whose Internet manifesto not only echoed themes propagated by the key U.S. Islamophobic ideologues, but also quoted directly from their writings in dozens of passages.

Indeed, Spencer’s blog, ‘Jihad Watch’, a programme of the David Horowitz Freedom Center, another group identified by the report as part of the Islamophobic network, was cited 162 times, while Pipes and the MEF receive 16 mentions, and Gaffney’s CSP another eight.

According to the report, ‘Jihad Watch’ has been supported via the Horowitz Center primarily by the Fairbrook Foundation, which is run by Aubry and Joyce Chernik. Between 2004 and 2009, Fairbrook provided nearly 1.5 million dollars to Islamophobic groups, including Act! For America, CSP, the Investigative Project, and MEF.

The Cherniks also supported the far-right Zionist Organization of America (ZOA) and Aish Hatorah, a far-right Israeli group behind the U.S.-based Clarion Fund, which produced the video, ‘Obsession: Radical Islam’s War Against the West’ that was, in turn, heavily promoted by the Islamophobic groups featured in the report. Breivik praised it in his manifesto.

Some 28 million DVD copies of the ‘Obsession’ film were distributed to households in key swing states on the eve of the 2008 presidential elections in an apparent effort to sway voters against Obama. Some 17 million dollars in funding for their distribution was provided by a Chicago industrialist, Barry Seid, according to a ‘Salon.com’ report published last year, and was channelled through Virginia-based Donors Capital Fund, which includes several prominent right-wing and neo-conservative figures on its board.

Donors to the Fund have also contributed 400,000 dollars to the Investigative Project and 2.3 million dollars to the MEF between 2001 and 2009, according to the report.

Other major donors included the Newton D. and Rochelle F. Becker foundations, the Russell Berrie Foundation, and the Anchorage Charitable Foundation and William Rosenwald Family Fund, according to the report.

In its mission statement, the Russell Berrie Foundation cited as one of its principal goals "fostering the spirit of religious understanding and pluralism".

"The intellectual nexus of the network is well understood," said Faiz Shakir, CAP’s vice president. "We know it’s driven primarily by hatred against Muslims; what we don’t know is what are the motivations of the funders. We don’t know to what extent they are aware of what is being funded," he said.

Horowitz denounced the report in a statement issued on its website, calling it a "typical fascistic attempt to silence critics and scare donors from supporting their efforts to inform the American public about the threats we face from the Islamic jihad."

Efforts to obtain comments from MEF and CSP were not successful.

Jim Lobe is the Washington bureau chief of the Inter Press Service and a contributor to Right Web (https://rightweb.irc-online.org).