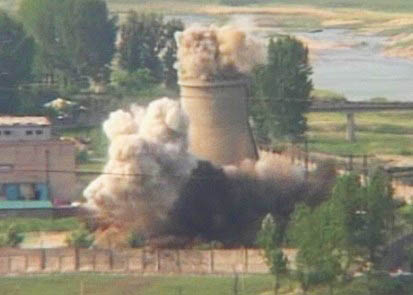 The same neoconservatives who dominated the Bush administration for almost eight years are now screaming like stuck pigs over the administration’s latest moves on North Korea. You would have thought that the heathens had been let into the temple—or, even worse, that W. had appointed Sen. Barbara Boxer (D-CA) or Sen. Russ Feingold (D-WI) to Cabinet positions.

President George W. Bush announced on June 26 that the United States would take steps to remove the last remaining Stalinist regime from the State Department’s list of state sponsors of terrorism. This step was in return for North Korea submitting a long-delayed official declaration about its nuclear program.

Bush made the announcement at the White House—refusing to delegate the statement to a press spokesperson or to bury the story by putting it out late on a Friday: “We welcome today’s development as one step in the multi-step process laid out by the six-party talks between North Korea, China, Japan, Russia, South Korea, and the United States.… This can be a moment of opportunity for North Korea.”1

This statement was followed days later when, in a largely symbolic gesture, North Korea blew up the cooling tower at one of its nuclear facilities, in full view of international television crews, who then disseminated the video around the world.

The president’s announcement was the culmination of a shift in administration policies that has astonished the world and infuriated conservatives. For the first six years of his time in the White House, the president largely avoided talking to those countries with which he disagreed. Negotiations with countries like North Korea or Iran, or so the thinking went, rewards bad behavior by those countries.

Instead of communication, Bush substituted harsh rhetoric and name-calling. He lumped North Korea with Iraq and Iran as part of an “axis of evil” in his 2002 State of the Union address to Congress. And he declared in December 2004: “As you might remember, our country has tried a strategy of bilateral relationships in hopes that we can convince Kim Jong Il. It didn’t work."2 Not to mention that he once admitted how much he “loathed” the North Korean dictator.

“Dear Leader" Kim Jong Il responded to this treatment by expelling international inspectors who were investigating his nuclear programs and by moving toward production of nuclear weapons. And he conducted a widely condemned nuclear bomb test in 2006. Current estimates are that North Korea possesses sufficient nuclear material to produce as many as 6–10 nuclear devices.3

The result of this policy of confrontation should be evident to all but the most myopic. Take the status of the “axis of evil” states. The United States invaded Iraq and is now mired in the sixth year of a disastrous war. Bush has largely refrained from talking with Iran, particularly one-on-one, and Tehran has proceeded to expand what it claims is a nuclear power program by building as many as 3,000 operating centrifuges that may be a precursor to nuclear weapons. And for several years, U.S. policy toward North Korea failed to prevent the evolution of the world’s ninth nuclear power.

But at that point, the Bush administration reversed course. Washington joined more enthusiastically in the six-party talks (negotiations with North Korea, South Korea, Russia, China, and Japan). U.S. officials, led by Assistant Secretary of State for East Asian and Pacific Affairs Christopher Hill and supported by Secretary of State Condoleezza Rice and ultimately by the president, were determined to see if an agreement was possible despite administration hawks.

Results followed. In February 2007, an agreement was reached under which North Korea agreed to shut its nuclear bomb fuel plant at Yongbyon in return for fuel shipments to the energy-starved country. Although the negotiations remained tortuous and deadlines continued to be ignored, North Korea eventually permitted international inspectors to return and began disabling Yongbyon.

Bush’s late June White House announcement set off a furious reaction among hardliners. Needless to say, one of the most quotable and most livid was former U.S. ambassador to the United Nations John Bolton, who while serving in government helped prevent any opening to progress on North Korea. Bolton was quoted in the June 27 New York Times as saying, “This is a sad, sad day. I think Bush believes what Condi is telling him, that they’re going to persuade the North to give up nuclear weapons, and I don’t think that’s going to happen. I think we’ve been taken to the cleaners.”4

Bolton was also quoted in USA Today as saying: "This represents the final collapse of Bush’s foreign policy.”5

Frank Gaffney, head of the Center for Security Policy and another prominent conservative, wrote on June 27: “President George W. Bush Thursday formally abandoned the last vestiges of a once-robust policy towards a North Korean regime he had rightly said he ‘loathed.’”6 Gaffney continued by saying, “President Bush has evidently concluded that—despite the demeaning of the United States and discrediting of his presidency entailed in the appalling diplomatic malpractice of Special Envoy Hill and Secretary of State Condoleezza Rice—the bad deal they have served up is better than none.”

Senior Republicans in Congress piled on. The ranking Republican on the House Foreign Affairs Committee, Rep. Ileana Ros-Lehtinen (R-FL), complained that, "In rewarding North Korea this way, we risk abandoning true and steadfast allies like Japan and we send a message to the regimes in Damascus and Tehran that the United States will endorse a reckless disregard of our own interests."7

The ranking Republican on the House Permanent Select Committee on Intelligence, Rep. Peter Hoekstra (R-MI) was equally caustic, stating that, "Lifting sanctions and removing North Korea from the list of state sponsors of terrorism flies in the face of history and rewards its brutal dictator for shallow gestures. Just as the Clinton administration was fooled by the Kim Jong Il regime, time will soon tell if the Bush administration will fall for the same bait."8

Sen. Sam Brownback (R-KS), the former Republican presidential hopeful, was scathing in his denunciation of the Bush administration: "I am particularly disheartened that the Administration failed to link our country’s concessions to the improvement in human rights for the North Korean people. … By giving Kim Jong Il a free pass, by abandoning key allies like Japan, and by giving up crucial sanctions that provide leverage, today’s events have only moved us closer to conflict and turmoil on the Korean peninsula.”9

Even Sen. John McCain (R-AZ), was less than effusive

about Bush’s announcement, calling it "a modest step forward."He added: “If we are unable to fully verify the declaration submitted today and if I am not satisfied with the verification mechanisms developed, I would not support the easing of sanctions on North Korea."10

Many Democrats were cautiously optimistic about the progress, referring to the need to see if North Korea continues to carry out its commitments. Others were less satisfied. Rep. Brad Sherman (D-CA), chairman of the House Foreign Affairs Terrorism, Nonproliferation, and Trade Subcommittee, introduced a resolution to block removing North Korea from the list of state sponsors of terrorism.

But both conservative and liberal critics of Bush’s deal with North Korea ignore a fundamental point: There is no better alternative policy. For six years, confrontation with North Korea led to the creation of new nuclear weapons power in a very uncertain region—an adverse development for world stability and U.S. security.

The talks over the past two years have halted further North Korea production of weapons plutonium, shut down a North Korean nuclear reactor, and produced additional information about one of the greatest secrets of one of the most reclusive countries in the world. A step-by-step process is well underway that holds promise that North Korea will verifiably abandon its nuclear weapons program, destroy its nuclear weapons and stop transferring nuclear equipment and know-how to other countries.

The next president is going to be handed a variety of intractable foreign policy challenges: North Korea; the Iraq War; the possibility of confrontation with Iran; a resurgent Russia; and an unstable, nuclear-armed, and terrorist-infested Pakistan, to name a few. If one of these intractable problems can be at least partially solved soon, it will be one less headache for the next occupant of the Oval Office.

But the six countries involved in the negotiations are continuing to make progress, even if it is agonizingly slow. On July 13, China announced in a joint communiqué that the countries had agreed on a blueprint for verifying North Korea’s nuclear declaration and its disarmament pledges.11 Under the latest agreement, international inspectors will visit North Korean nuclear facilities, review documents, and interview personnel at the plants. The International Atomic Energy Agency will participate in the verification process.

The negotiations and bargaining will continue, slowly, with many twists in the road. Conservatives will pour more withering scorn on the Bush administration’s reversal, but undeniable progress is finally being made.

John Isaacs is the executive director of the Council for a Livable World and a contributor to Right Web (https://rightweb.irc-online.org ).