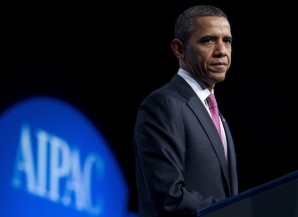 U.S. President Barack Obama has made a clear statement against a rush to war — either by the U.S. or Israel — with Iran, while also emphasizing that he would pursue that option if alternatives were unsuccessful in ensuring that Iran would not develop a nuclear weapon.

Speaking at the annual policy convention of the powerful American Israel Public Affairs Committee (AIPAC), Obama decried the "loose talk of war" and contended that sanctions and international pressure are working.

"Now is not the time for bluster; now is the time to let our increased pressure sink in, and to sustain the broad international coalition that we have built," he said, noting that the recent drumbeat for war "has only benefited the Iranian government, by driving up the price of oil."

He was no doubt referring to recent reports that Israel was preparing to strike Iranian nuclear targets this year, as well as exhortations by its supporters here, including three of the four major Republican presidential candidates, to take a more aggressive and threatening stance against Iran or to support Israel if it undertakes an attack against Tehran's nuclear facilities on its own.

Obama began pushing back on that pressure last week in an interview with Jeffrey Goldberg of The Atlantic magazine in which he stated that "our assessment, which is shared by the Israelis, is that Iran does not yet have a nuclear weapon and is not yet in a position to obtain a nuclear weapon without us having a pretty long lead time in which we will know that they are making that attempt."

Obama went on to urge a diplomatic resolution, which, he contends, there is still time to achieve. He reiterated that point at the AIPAC conference Sunday.

"Given their history, there are of course no guarantees that the Iranian regime will make the right choice. But both Israel and the United States have an interest in seeing this challenge resolved diplomatically. After all, the only way to truly solve this problem is for the Iranian government to make a decision to forsake nuclear weapons. That's what history tells us."

AIPAC has been backing a resolution in the U.S. Senate which would draw a "red line" at Iran's acquisition of the "capability" of building a nuclear weapon, a lower, if substantially more vague, threshold than actually possessing one.

The group, whose positions generally reflect those of the Israeli government, sent thousands of its members gathered for the conference to Capitol Hill to lobby lawmakers to support that resolution. The conference also heard directly from Prime Minister Benjamin Netanyahu after what many regarded as a critical meeting between Netanyahu and Obama.

Many analysts, including the U.S. and Israeli intelligence agencies, believe that Iran is already technically capable of producing a nuclear weapon but has not yet made the decision to actually build one. So the Senate's approval of the resolution, especially if it carries an overwhelming majority of the upper chamber, not only risks escalating tensions with Tehran, but would also challenge the administration's policy, as enunciated Sunday by Obama himself.

Obama drew this distinction in his speech Sunday at the AIPAC conference by repeatedly warning about Iran "obtaining" a nuclear weapon, while not mentioning "capability."

"I have said that when it comes to preventing Iran from obtaining a nuclear weapon, I will take no options off the table," the president stated. "And I mean what I say.

"Iran's leaders should know that I do not have a policy of containment; I have a policy to prevent Iran from obtaining a nuclear weapon," he told the 13,000 AIPAC delegates. "And as I've made clear time and again during the course of my presidency, I will not hesitate to use force when it is necessary to defend the United States and its interests."

In the last several weeks, it has become increasingly clear that the U.S. and Israel disagree not only on their definition of "red lines" that would provoke military action, but also on what an acceptable negotiated outcome with Iran might be.

Israel has long held to the same position as former President George W. Bush: that Iran should not be permitted to enrich uranium on its own territory, a result that is also favored by the sponsors of the pending resolution. The Obama administration, on the other hand, has indicated it is willing to accept a settlement permitting enrichment in Iran, provided it is subject to enhanced international oversight.

On the eve of his visit to AIPAC, Netanyahu said he saw no use in further negotiations, but most analysts believe a new round of talks between Iran and the so-called P5+1 (the U.S., Britain, France, Russia, China, and Germany) will take place as early as the end of this month.

Obama's presentation at AIPAC came in the context of a larger controversy over his role in U.S.-Israel relations.

Speaking immediately before Obama, Israeli President Shimon Peres, who is believed to oppose a unilateral Israeli attack on Iran's nuclear facilities, praised Obama for his support of Israel and his efforts to prevent Iran from acquiring a nuclear weapon.

"He has made it clear that the United States of America will never permit Iran to become nuclear. He made it clear that containment is not a viable policy," Peres said. "And as the president stated, all options are on the table…Mr. President, I know your commitment to Israel is deep and profound. Under your leadership, security cooperation between the United States and Israel has reached its highest level. Ladies and gentlemen, we have a friend in the White House."

Yet the applause for Peres when he was introduced was noticeably much greater than that for Obama.

And just before the two presidents spoke, Liz Cheney, the daughter of former vice president Dick Cheney and an ascendant neo-conservative in her own right, drew considerable applause herself when she charged during a discussion with several other prominent analysts that Obama had undermined Israel more than any president before him.

Although that applause was exceeded when fellow panelist and former Congresswoman Jane Harman, now head of the prestigious Woodrow Wilson Center in Washington, chastised those who would break the bipartisan consensus on support for Israel and turn the issue into a "political football," it remained a strong indication of the sizeable contingent in the cavernous Washington Convention Center hall used by AIPAC for its annual convention that was very hostile to Obama.

Aware of this, Obama preceded his statements on Iran by defending his record of support for Israel and echoing Harman's criticism of those who would politicize the issue.

"If during this political season you hear some question my administration's support for Israel, remember that it's not backed up by the facts," Obama said.

He pointed to the widely acknowledged fact that U.S.-Israel security cooperation is greater than ever, as well as his repeated — and often lonely — defenses of Israel at the U.N. and other international forums, many of which have drawn criticism from some of Washington's closest allies.

Obama thereby set the stage for his defense of his Iran policy, and where the role of military force fits into it.

"As president and commander-in-chief, I have a deeply-held preference for peace over war," Obama said. "I have sent men and women into harm's way. I have seen the consequences of those decisions in the eyes of those I meet who have come back gravely wounded, and the absence of those who don't make it home. …I only use force when the time and circumstances demand it."

Although most of his speech was devoted to Iran, Obama also spent several minutes warning against "cynicism" and "despair" regarding the Palestinian issue, which has virtually disappeared from the headlines over the past year, displaced by the so-called "Arab Spring" and the escalation in tensions over Iran. But he announced no new initiatives in that regard.

Mitchell Plitnick is a contributor to Inter Press Service.