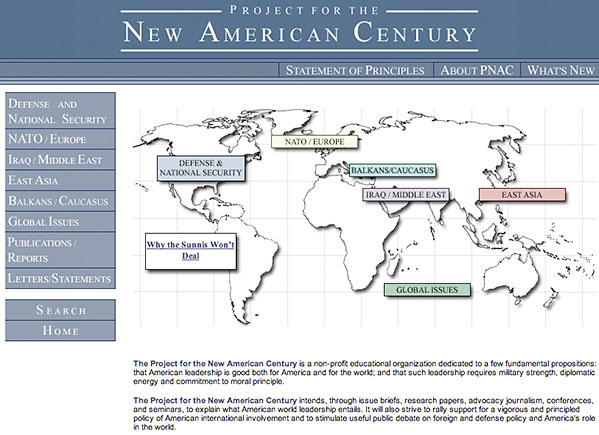 The website of the Project for the New American Century went offline last month, spurring conspiratorial rumors regarding the once-prominent neoconservative group, which had been a vocal proponent of regime change in Iraq before and after 9/11 and had displayed a knack for coalition-building across the political spectrum. Though its former executive director says the dead website is due to a forgetful accountant, PNAC’s loss of support reaches beyond the technical.

Since the middle of May, visitors to the website of the Project for the New American Century (PNAC) have been greeted by a cobalt-grey screen displaying the message: “This account has been suspended. Please contact the billing/support department as soon as possible.” It is a banal message on the site of a group that was generally considered anything but. Promoting an interventionist, militarist agenda that supported regime change in Iraq well before 9/11, PNAC has worn the mantle of neoconservative standard-bearer since its inception as a letterhead group in 1997. The source of some of the most ambitious and controversial clarion calls in America’s post-Cold War foreign policy debates, PNAC was one of first groups to use the events of 9/11 as a call for ousting Saddam Hussein from Iraq (even without evidence of a link to al Qaeda), as well as for supporting a hardline agenda for Israeli security and boosting national defense spending.*

For the many critics who see the Iraq War as PNAC’s primary legacy, it is tempting to see the lapsing of the group’s website as the latest example of pro-war neoconservatives fleeing from their mistakes. With many former Bush administration officials and advisers (some from the PNAC orbit, like Richard Perle and Kenneth Adelman ) attempting to distance themselves from the failures in Iraq, it seems reasonable that whoever remains in charge of PNAC’s website might be attempting to quietly scrub the Internet of evidence of the organization’s famous proclamations and open letters, many of which now read like arrogant anachronisms. “Just as the neocons are attempting to run from responsibility for the Iraq War, it appears PNAC may be abandoning its own website,” observed a blogger at the Center for American Progress, typifying reaction on the left.

But it turns out that there is no larger meaning to the suspension of PNAC’s site, newamericancentury.org. “Someone just forgot to pay the bill,” said former PNAC executive director Gary Schmitt, now a fellow at the American Enterprise Institute (AEI). “There’s no hidden reason, as some bloggers have suggested.” The site will go back online, says Schmitt, “when the accountant gets around to it.”

For PNAC watchers, that the website went offline produced no shock—although the fact that the organization still has an accountant might. PNAC ceased day-to-day operations in 2005, after it issued its final open letter calling for more U.S. forces in Iraq. Before finally going blank last month, the PNAC website had been gathering cyber-dust for over a year, serving as a sort of online repository of neoconservative thinking, an archive of support for the “war on terror” and other causes.

Much of PNAC’s work—in the form of sign-on letters and statements—dealt with Iraq. In 1998, the organization issued several open letters warning of the growing threat emanating from Baghdad. The first of these letters was issued on January 26, 1998 and was reprinted for maximum impact in the New York Times and the Washington Post. The United States had to protect its troops in the Middle East, its oil, and its allies Israel and the “moderate Arab states,” the letter declared. “The only acceptable strategy [toward Iraq],” read the letter, “is one that eliminates the possibility that Iraq will be able to use or threaten to use weapons of mass destruction. In the near term, this means a willingness to undertake military action as diplomacy is clearly failing. In the long term, it means removing Saddam Hussein and his regime from power.”

Many of the signatories to this and other PNAC letters would go on to join the George W. Bush administration—including Richard Armitage, Paul Wolfowitz, Zalmay Khalilzad, and Donald Rumsfeld—and turn what were private views into national policy. Other signatories, notably Francis Fukuyama, would break with their colleagues and eventually denounce the PNAC vision of a Pax Americana maintained by preventative, unilateral force. Although those who signed its statements were frequently from the Right, PNAC displayed a knack for coalition-building that reached across the political spectrum. Examples of signatories from the Left or Center and the statements they supported include Mort Halperin (on removing Slobodan Milosevic from power), Madeleine Albright (on NATO and the EU), and Steven Clemons (on Hong Kong’s freedom).

Clemons, now a director at the left-leaning New America Foundation and the publisher of the Washington Note, a blog that has actively opposed PNAC’s broader work, says that signing the letters was no problem because he agreed with the specifics of certain letters—even if he disagreed with the overall direction of PNACs work. “Am I happy in retrospect given the recklessness of PNAC’s national security objectives writ large that I signed those letters? No,” Clemons told me via e-mail. “But I signed them for substantive reasons at the time—and if faced with the same situation again with the one modification that PNAC had ascended and was essentially running national security policy and promoting wars all over the world, I definitely would not.”

Growing distaste for PNAC’s interventionist agenda coincided with the mounting costs of the occupation in Iraq, and as America’s strategic position declined, PNAC’s activities came to a halt. In its last letter, dated January 28, 2005—almost exactly seven years to the day after it first called for regime change in Baghdad—PNAC signatories urged Congress to increase the size of the active duty Army and Marine Corps for the express purpose of fulfilling America’s “generational commitment” to the U.S. “engagement” in the Middle East. Less than a year later, shortly before the 2006 midterms and the subsequent resignation of Secretary of Defense Rumsfeld, the organization had gone quiet.

The Washington Post was the first to venture a PNAC postmortem, publishing an article that quoted one PNAC associate as saying the organization was "heading toward closing" with the feeling of "goal accomplished." Not long after the Post article appeared, Schmitt, at the time still PNAC’s executive director, told the BBC, “When the project started, it was not intended to go forever. That is why we are shutting it down. We would have had to spend too much time raising money for it and it has already done its job.”

That job may have been symbolized by the invasion of Iraq, but PNAC’s mission was broader than simply bringing down Saddam Hussein; it was also heavily rooted in America’s pre-9/11 political culture. As first explained by PNAC founders William Kristol and Robert Kagan during the 1996 presidential election, it was necessary to attack and break up a “tepid consensus” on U.S. foreign policy that had zombified both parties and the American public since the end of the Cold War. Kristol and Kagan were horrified by America’s inward-looking debates and what appeared to be a complete lack of interest in geopolitics. They considered the approach by the two parties during the 1990s to be small-minded and shortsighted, civically enervating and suicidal to U.S. national interests and values.

At first, their main targets were not Democrats, but “McGovern Republicans” within the GOP who sympathized with the isolationism of Pat Buchanan more than the imperial zeal of their hero Teddy Roosevelt. Kristol and Kagan introduced the ideas—soon to be institutionalized by PNAC—in their July/August 1996 Foreign Affairs essay, “Toward a Neo-Reaganite Foreign Policy.” The article does not single out Iraq for invasion, but the general framework for embracing “benign hegemony” is laid out in no uncertain terms. America must pursue policies “intended to bring about a change of regime” when necessary, the authors state.

One year after Kristol and Kagan’s article appeared (12 years ago this month), they launched PNAC. The organization that would one day become an outsized bogeyman in the eyes of the left was always modest in staff and resources; at its peak, it had little more than a few desks and a staff of four in the AEI building. In their just-released book, American Between the Wars, scholars Derek Chollet and James Goldgeier describe PNAC as “a virtual club” that for years lacked the power to do anything more than write letters and sign them. According to Fukuyama, quoted by Chollet and Goldgeier: “PNAC was Bill Kristol and his fax machine.”

Today, the crusade launched by that fax machine has gone full circle: from little-known dissident pressure group whose ideas were out of step with public opinion, to supplying the White House and Defense Department with personnel and ideas, to a footnote in American political history whose most famous alumni are again scattered outside of government.

Like some prehistoric bird known only to paleontologists, PNAC today seems to have been forgotten, even in quarters you’d expect it to remain in high, if not legendary, esteem. When I called the conservative Heritage Foundation requesting a research fellow to interview on the subject of PNAC’s legacy and lapsed website, the young media-relations officer who answered the phone was confused by the reference. “The Project for a New America, uh…,” he stumbled. “Is that a liberal group?”

He isn’t the only young conservative who cannot place the acronym. The man who answered the phone at the Philanthropy Roundtable, a conservative education and donor outfit that used to share a kitchenette with the PNAC on 17th Street in downtown Washington, the same building that houses AEI and the Weekly Standard, was likewise clearly bewildered by the PNAC reference. “I don’t really know about them,” he said, “Let me check.” He transferred me downstairs to William Kristol’s assistant, Carolyn Wimmer, to whom I put the same questions. Did the closing down of the website signify lights-out, forever? Was it ever coming back online? “Not sure. Dunno,” said Wimmer. She was on surer ground when I asked about the New Citizenship Project (NCP), another Kristol organization formerly based out of the Weekly Standard offices that once funded PNAC. “The NCP is defunct,” said Wimmer. “Definitely.”

With the NCP and PNAC both out of commission, the Weekly Standard is the last of the three neoconservative projects started by William Kristol in the mid-1990s to remain active. If one day the magazine’s website goes down for non-payment, it won’t take multiple phone calls to know the neoconservative idea machine is really in trouble, even more than it is today.

Alexander Zaitchik is a freelance journalist and a contributor to PRA’s Right Web (https://rightweb.irc-online.org)

*Editor’s note: PNAC apparently resolved its accounting department’s mistake; the website was back online in September 2008.