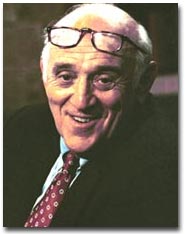 Ben Wattenberg was an author and demographer who for many years was based at the American Enterprise Institute and was the host of Think Tank, a PBS talk show that aired during 1994-2010.[1]  He passed away in June 2015.

A former staffer for Lyndon Johnson and Hubert Humphrey, Wattenberg was a member of a group of Democratic Party hawks who drifted to the right during the 1970s.[2] Mark Gerson, a former director of the Project for the New American Century and author of The Neoconservative Vision, included Wattenberg among a core group of 40 “largely Jewish intellectuals who, once considered to be on the left, are now on the right.”[3]

Like a number of his neoconservative contemporaries, including Richard Perle and Frank Gaffney, Wattenberg served on the staff of the hawkish pro-Israel Sen. Henry “Scoop” Jackson (D-WA), promoting Jackson’s crusade against the Democratic Party’s dovish left wing as a member of the Coalition for a Democratic Majority in the early 1970s before joining the Reagan administration in the 1980s.

After Reagan was elected, Wattenberg was tagged to serve on the board of Radio Free Europe and Radio Liberty, the radio stations made famous during the Reagan era for their anticommunist broadcasts into the Soviet Union.[4] Also at that time, Wattenberg joined the likes of Donald Rumsfeld and Midge Decter in supporting the work of the Committee for the Free World. The group, which was devoted to promoting freedom “in the world of ideas” and opposing the influence of those in and outside the United States “who have made themselves the enemies of the democratic order,” served as a bastion of hardliners and neoconservatives during the 1980s.

A 2008 profile of Wattenberg in the Pittsburgh Tribune, republished by David Horowitz’s FrontPageMag.com, described Wattenberg’s views accordingly: “The more you know about Ben Wattenberg, the more you understand why Ronald Reagan called him his favorite Democrat. Wattenberg … is a tough 1960s Democrat—a neoconservative on foreign and domestic matters who suspects Al Gore is on a religious crusade when it comes to global warming and who thinks his good friend Joe Lieberman is too far left on some domestic issues.”[5]

Wattenberg once described himself as “a registered Democrat” who in the 1960s concluded that “the far left wing of the Democratic Party went overboard.”[6] He detailed his drift to the right in his 2008 book Fighting Words: A Tale of How Liberals Created Neo-conservatism.[7] A reviewer for the right-wing American Spectator observed that the book was aimed at “rehabilitating neoconservatism,” arguing that according to Wattenberg, the early movement was as much about reversing “the degradation of American culture” as promoting an “aggressive foreign policy.”[8]

During the George W. Bush years, Wattenberg joined a formidable list of neoconservatives and foreign policy hawks to resurrect the Committee on the Present Danger (CPD), a Cold War-era group that had railed against détente with the Soviet Union, to advocate an aggressive war on terror. In a blurb on CPD’s website, Wattenberg is quoted as saying: “The rules of the game are strange: we win if we win, they win if they win, and we win in case of a tie. There will be plenty of other opportunities after Iraq to chase them down in a world which will remain uncertain, but with America as the leader.”[9]

Wattenberg avidly supported the Iraq War, falsely insisting well into 2008 that “there were weapons of mass destruction” in Iraq and that the war “was U.N.-sponsored.”[10] The former claim had long been debunked, and the latter blithely ignored that the UN Security Council had pointedly refused to endorse the U.S. invasion, which former UN Secretary-General Kofi Annan famously described as “illegal.”[11]

In a June 2006 article for the conservative National Review, Wattenberg criticized those who compared the Iraq War to the Vietnam War, arguing: “On the Vietnam Memorial in Washington are about 58,000 names; in Iraq, the total number of KIAs is lower than the number of Americans killed on 9/11,” though that number was subsequently eclipsed. Wattenberg continued: “In both wars, we were told our actions would hurt us in the eyes of the world. And so they did. Unfortunate. But we ended up as the exceptional nation, Number One, more influential than any nation in history, the City on a Hill, hearing anti-American language which boiled down to ‘Yankee go home and take me with you.’”[12]

Until 2008, Wattenberg maintained a blog called Wattenblog, where he argued that then-GOP presidential nominee John McCain should tap Joe Lieberman as his running mate,[13] praised Dick Cheney as “one tough hombre,”[14] and argued that Lewis “Scooter” Libby—the former Cheney chief of staff convicted for lying about his role in outing a CIA agent whose husband had criticized the Iraq War—hadn’t done anything wrong, characterizing the compromised CIA agent Valerie Plame as “the wife of a loud-mouth braggard very-partisan Democrat.”[15] Wattenberg offered other inane thoughts on the blog, like musing that global warming will not “be so terrible,” because “There was a big-time flood recorded in The Bible and evey [sic] other important document. We will survive—and flourish—unless we screw it up.”[16]

Among Wattenberg’s core subjects at AEI were population demographics and immigration. He has argued frequently that U.S. birth rates are too low and that immigration is necessary to supplement America’s modest natural growth rate. “Divorce, legalized abortion, and easy-to-use contraceptives have all contributed to the numbers of ‘never-born babies,’” he wrote in 2012, arguing that declining birth rates in the United States, Europe, and Asia have led to a “‘social deficit’ that plagues nations across the world and threatens to break the bank in many.”[17]

Wattenberg argued in particular that the United States needs immigrants to maintain a large military. In an April 2006 National Review article, he wrote: “At its most elemental, size means it is easier to fund a defense force, which is cheaper per person when paid by 500 million people instead of 300 million. … All things being equal, which is often the case, a large population yields power and influence.”[18]

Wattenberg detailed his views on population in his 2004 book Fewer: How the New Demography of Depopulation Will Shape Our Future. The Publishers Weekly review of the book was critical: “As Wattenberg surveys the reasons behind declining fertility rates, his arguments take an assertive turn. Wattenberg bemoans abortion, women who put careers before children, homosexuality and co-habitation without marriage—all with little of the statistical analysis that bolsters his initial arguments. Wattenberg himself says, ‘straightforward demographic numbers can engender mighty arguments,’ but doesn’t let his own numbers speak for themselves.”[19]

[6] Ben Wattenberg, “Why not a McCain-Lieberman ticket?” Wattenblog, February 22, 2008, http://wattenblog.blogspot.com/2008/02/why-not-mccain-lieberman-ticket.html.