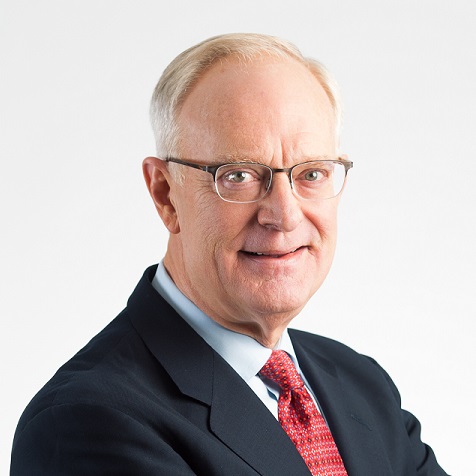 Christopher DeMuth served as president of the American Enterprise Institute (AEI), a preeminent think tank of neoconservatism, for more than 20 years. In January 2009, DeMuth stepped down and was replaced by Arthur Brooks, a former professor of business and government policy at Syracuse University’s Maxwell School of Citizenship and Public Affairs.

In 2011, joined the Hudson Institute as a distinguished fellow.[1] He has used his perch at Hudson to push for calls to derail Obama administration plans an policies. For instance, in a January 2014 National Review article, Demuth hailed the then-recently elected Republican majority in Congress, arguing that the new Congress should pass laws against “the Obama administration’s late-term ambitions.” In particular, he highlighted net neutrality as a target, which the Obama White House has defended, calling it a “astoundingly retrograde notion.” He also declared in the piece that the “114th should reclaim the authority that previous legislators delegated to executive agencies.”[2]

Despite his ambitions for Congress, Republican leaders have failed to live up to DeMuth’s expectations. In a January 2016 interview for right-wing Liberty Law Talk, DeMuth decried what he termed the “institutional decline” of Congress.[3]

Discussing his decision to step down as president, DeMuth said at an AEI dinner in December 2008, “It has been said that my leadership of AEI has been selfless, even self-sacrificing. Now any departure from rationally self-interested behavior is a dagger at the heart of our philosophical precepts, so I would like to set the record straight. I am of the view that AEI’s work is, at its best, miraculous. … [Nothing] compares to the pure intellectual feat of producing knowledge where there had been none, transforming confusion into clarity, organizing the blur of experience into words and figures and arguments that are persuasive to the human mind, and transmitting them to millions of people whose understanding of their world is thereby deepened and improved, including many in a position to use it to effect tangible improvements. Believing as I do that this is a miracle, I would say that if my twenty-two years of stewardship had produced one such miracle, I would feel richly compensated and happily justified. Instead it has produced many hundreds of such miracles, crystallized for all time in books and monographs and essays in journals, magazines, and newspapers.”[4]

DeMuth became head of the AEI in 1986, at a time when the Washington D.C.-based think tank was emerging as one of the most influential institutions of the U.S. Right. During his tenure, he supported a range of conservative positions, ranging from the need to roll back government regulations to promoting the values of unfettered free enterprise and strong corporations, which he once described as the “transmission belt of much of our saving, prosperity, and progress.”[5]

DeMuth also oversaw AEI efforts to call into question climate change research. In early 2007, various reports alleged that AEI had contacted several scientists and offered them $10,000 to provide papers that would contradict a U.N. Intergovernmental Panel on Climate Change study.[6] In response to a letter from four senators questioning the AEI initiative, DeMuth denied the accusations and insinuated that they were stifling debate because they “object to [researchers] being paid a ‘significant sum’ for dissenting research, which rather limits your conception of permissible dissent.”[7]

Arguably one of DeMuth’s more prominent legacies was his role in overseeing AEI’s work during the George W. Bush presidency, including the effort by many of the institute’s scholars to push the war in Iraq and an interventionist “war on terror.” As Slate reported, “The Iraq War was, to a remarkable extent, an AEI production. Vice President (and Hawk-in-Chief) Dick Cheney was an AEI fellow immediately before joining the Bush White House, and his wife Lynne still is. Douglas Feith, former undersecretary of defense for policy and, outside of Cheney, the most robotic defender of the Iraq invasion, was an AEI fellow. So was Laurie Mylroie, the leading academic proponent of the crackpot theory that Iraq was behind 9/11. Richard Perle is an AEI scholar. So is John Bolton. So is John Yoo, the Bush Justice Department’s former torture maven. When former Pentagon deputy secretary and Iraq hawk extraordinaire Paul Wolfowitz resigned as president of the World Bank (over a dust-up concerning a high-paying job he’d arranged for his girlfriend), where did he land as a visiting scholar? You guessed it.”[8]

In the lead up to the Iraq war, Council on Foreign Relations President Leslie Gelb said that the Bush administration could benefit from some outside advice, suggesting that its reliance on a small group of tightly connected advisors had proved faulty. He volunteered to bring together three groups, including his own, to discuss how this could be done. Condoleezza Rice, then the national security advisor, agreed, but asked that the Heritage Foundation, a conservative think tank that had expressed some reservations about the invasion, be replaced by AEI. At an initial meeting between Rice and the heads of the three groups, Rice reportedly paid attention only to DeMuth. When Gelb began to lay out his thoughts on planning and what the situation would require in post-invasion Iraq, he was quickly cut off by DeMuth. “This is nation-building, and you said you were against that,” said DeMuth.[9]

DeMuth got his start working as a staff assistant in the Nixon White House, practicing law, and lecturing at Harvard University. Following these stints, DeMuth settled in as an anti-regulation champion in the Reagan White House, serving as the director of the Presidential Task Force on Regulatory Relief and as an administrator in the Office of Information and Regulatory Affairs. DeMuth then went on to work at Lexecon Inc., an economics and law consultancy. In 1986, he became the editor-in-chief and publisher of Regulation, a magazine started by AEI that advocates removal of regulations that hinder businesses and which was subsequently acquired by the libertarian Cato Institute. That same year, he was chosen to be president of AEI.[10]

Under DeMuth, AEI increased its funding dramatically, which by 2007 totaled $31.3 million in revenue.[11] During his leadership, AEI increasingly tailored its products to conform to the tastes of conservatives and corporate underwriters of the think tank.[12] Equally important to the institute’s success has been the largesse of a passel of right-wing foundations that supported AEI during DeMuth’s tenure, including the Smith Richardson Foundation, where DeMuth has served as a grants advisor.[13] Other foundations that have given generously during this period include the Scaife Foundations, the Olin Foundation, and the Bradley Foundation.

DeMuth has published several books, including the 2008 AEI volume Religion and the American Future, which DeMuth co-edited with Yuval Levin. An AEI promotional website for the book claims, “In Religion and the American Future, a distinguished group of scholars examine the future of religion in America. … They argue that the religious and the secular realms should construct a mutual and productive understanding; that faith-based voting is not the threat it often seems; that science cannot answer humanity’s deepest moral inquiries; and that the United States Constitution presupposes the existence of God. The volume concludes with an instructive look at Europe and the troubling implications of turning away from religious belief altogether.”[14]


9. Benjamin Wallace-Wells, “In the Tank: The Intellectual Decline of AEI,” Washington Monthly, December 2003.