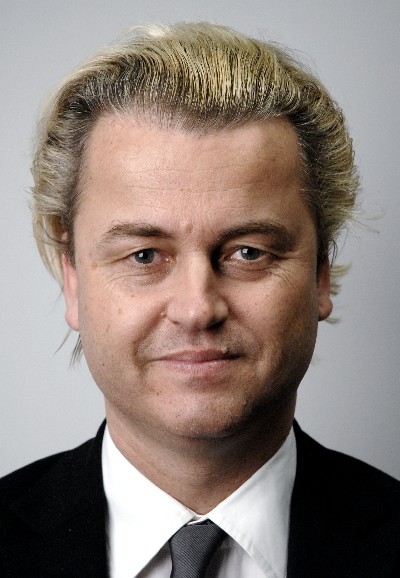 Geert Wilders, a member of the Dutch Parliament and leader of the right-wing Dutch Freedom Party, is a controversial proponent of anti-Islamic policies. His flamboyant personal style and stridently ”Islamophobic” views have helped convert Wilders into a cause célèbre among many neoconservative and other right-wing factions in the United States. He is the founder of the International Freedom Alliance, a global coalition of anti-Islamic activists that appeared to be inactive as of mid-2012.[1] 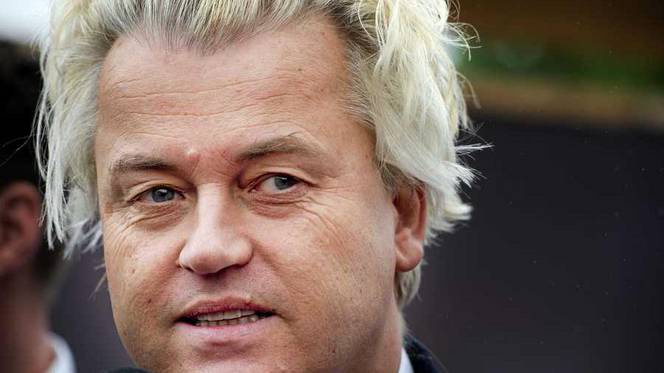 Wilders was first elected to Parliament in 1998 as a member of the center-right Liberal Party (VVD). Appointed the party’s spokesman on foreign affairs in 2002, Wilders became increasingly outspoken about what he regarded as the pernicious influence of radical Islamism on the Dutch Muslim community. In 2003, he partnered with fellow MP Ayaan Hirsi Ali—a Somali-born ex-Muslim and co-partisan of Wilders—to publish a letter in NRC Handelsblad calling for a “liberal jihad” against Islam in the Netherlands.[2]

His outspoken broadsides against Islam and what he considered his party’s inaction on the matter, however, eventually sullied his relationship with his parliamentary colleagues. After publicly breaking with the party in the mid-2000s on a host of issues—including most notably the party’s willingness to consider extending EU membership to the Muslim-majority state of Turkey—Wilders founded the far-right Freedom Party.[3] The Freedom Party has steadily increased its representation in Parliament,[4] leading Wilders to declare his ambition to eventually become prime minister.[5]

According to the Guardian, Wilders has said he has “no problem” with individual Muslims. However, echoing some on the American right, he has denigrated Islam as “not a religion” but rather “the ideology of a retarded culture.” Among other things, his Freedom Party’s platform has called for a ban on immigration from Muslim-majority countries, a voucher plan to pay Muslims currently living in Holland to leave, and the deportation of Muslim “criminals” (presuming they are immigrants in the first place).[6]

Wilders has also called for a constitutional amendment to ban the “fascist Koran” and has suggested formally recognizing the “Judeo-Christian” culture as the Leitkultur of the Netherlands. His platform would ban the construction of new mosques and order the closure of Islamic schools. “Islam is something we can't afford anymore in the Netherlands,” he told theGuardian. “We need to stop the Islamisation of the Netherlands. That means no more mosques, no more Islamic schools, no more imams. … Not all Muslims are terrorists, but almost all terrorists are Muslims.”[7]

Wilders’ anti-Islamic politics closely resemble those of other far-right leaders in Europe, and Wilders himself has often been likened to the late French politician Jean-Marie Le Pen and his daughter Marine. Wilders, however, has denied such comparisons. “My allies are not Le Pen or [the late Austrian politician Jorge] Haider,” he told the Guardian. “We'll never join up with the fascists and Mussolinis of Italy. I'm very afraid of being linked with the wrong rightist fascist groups.”[8]

Unlike some other far-right leaders in Europe—who have often been accused of anti-Semitism—Wilders is a strident supporter of Israel who has visited the country over 40 times.[9] "When I'm here I'm with my people, my country, my values,” he said during a 2008 visit to Jerusalem. “I feel more at home here than in many other European countries. Israel's a democracy—it's everything we stand for."[10]

Wilders’ activism earned him the enmity of many in the Netherlands’ minority communities, who filed formal complaints against the parliamentarian for hate speech in 2007. Although Dutch authorities decided not to try Wilders in 2008 over complaints about his controversial short film Fitna[11]—which features Quranic passages overlaid with footage of the World Trade Center attacks, along with other gory footage of terrorist attacks—prosecutors ultimately brought charges in 2009. After two trials, Amsterdam judge Marcel Oosten acquitted Wilders of all charges in June 2011, ruling that although Wilders’ views were “gross and denigrating” toward the Islamic faith, they were “acceptable within the context of public debate.”[12] During his trial, Wilders was banned from traveling to the United Kingdom due to concerns that he would incite anti-Islamic sentiments there. The prohibition has since been lifted.[13]

Wilders is the author of the 2012 memoir Marked for Death: Islam’s War against the West and Me. One reviewer said the book was a relatively dry account of “how Wilders has become what he is.” He added, “Wilders has a small, rich and fanatical group of followers in America. But it remains to be seen if this book will boost Wilders’ popularity.”[14]

Wilders used his hate speech trial to curry favor with right-wing audiences abroad, especially in the United States, where he has become a celebrated figure in certain neoconservative and Islamophobic circles. Journalists Eli Clifton and Daniel Luban reported that a 2009 U.S. visit by Wilders—ostensibly to promote “free speech” but in fact an effort to promote his film and raise money for his legal defense fund—was “sponsored and promoted by an unlikely coalition of groups united primarily by their hostility towards Islam,” including “neoconservative and right-wing Jewish groups on the one hand and figures with ties to the European far right on the other.”[15]

The chief sponsors for Wilders’ trip included far-right neoconservative outfits like Frank Gaffney’s Center for Security Policy, the David Horowitz Freedom Center, and Daniel Pipes’ Middle East Forum.[16] In January 2010, Pipes himself penned an ode to Wilders, saying that although he “disagree[d] with Wilders about Islam,” he still found Wilders “the most important European alive today,” someone who “has the potential to emerge as a world-historical figure” because of his willingness to “deal with the Islamic challenge facing the continent.” Pipes and the Middle East Forum actively fundraised during this period for Wilders’ defense fund.[17]

Wilders has also been welcomed into more exclusive right-wing power circles in the United States. During his 2009 visit, Wilders screened Fitna for a Capitol Hill audience convened by Republican Sen. Jon Kyl on the same day Sen. John Kerry was holding a hearing on “engaging with Muslim communities around the world.” Democratic Rep. Keith Ellison, one of only two Muslims in the U.S. Congress, protested Kyl’s decision “to use the United States Capitol as a venue for the condemnation of an entire religion.”[18]

According to Clifton and Luban, Wilders “also appeared on Bill O'Reilly's and Glenn Beck's popular right-wing TV shows, met privately with the Wall Street Journal editorial board, and hobnobbed with former U.N. ambassador John Bolton at the Conservative Political Action Conference (CPAC).” Wilders concluded his visit with an address at the National Press Club, where he “reiterated his calls for a halt to immigration from Muslim countries and pronounced, to raucous applause from the audience, that ‘our Western culture based on Christianity, Judaism, and humanism is in every aspect better than Islamic culture.’”[19]

Wilders has also been the guest of conservative philanthropist Nina Rosenwald, a major funder of neoconservative and Islamophobic advocacy groups in the United States. “Operating under the Hudson banner, Rosenwald brought Wilders to town in 2008 to warn against the Muslim plot to ‘rule the world by the sword,’ journalist Max Blumenthal reported. “Wilders’s tirade during that visit against the prophet Muhammad, whom he described as ‘a warlord, a mass murderer, a pedophile,’ was strident even by the standards of the hawkish Hudson Institute.” In April 2012, Rosenwald hosted Wilders again, this time at a $10,000-a-head function for the newly established Gatestone Institute. “Islam is primarily a dangerous ideology rather than a religion. This is the truth,” Wilders told the audience. “This violent ideology wants to impose Islamic Sharia law on the whole world, including us—the Kafirs, the non-Muslims…. Islam is the largest threat to freedom which the world is currently facing.”[20]

Wilders has occasionally waded publicly into U.S. debates. At a 2010 rally organized by Pamela Geller and Robert Spencer against the Park 51 Islamic Center in lower Manhattan—the so-called “Ground Zero mosque”—Wilders called on New York to "defend itself against the powers of darkness,” warning that “America, New York, and shari'a are incompatible.” Geller introduced Wilders at the event as her “hero.”[21] The speech provoked controversy back in the Netherlands, where government officials expressed concern that Wilders’ views could be mistaken in the United States for the position of the Dutch government.[22]

In April 2015, Wilders was invited to Washington by Reps. Steve King (R-IA) and Louie Gohmert (R-TX) to warn “of the dangers of Islamization.”[23] During a press conference on Capitol Hill, Wilders ranted about the dangers of Muslim immigration to the United States. “I am warning America. Don't think that what's happening in Europe today will not happen in America tomorrow because it will,” he declared. “Islamic immigration has proven to be a Trojan horse, the jihadists are among us."[24]

During the same trip, Wilders served as the keynote speaker at a controversial cartoon contest of drawings of the Muslim prophet Muhammad in Garland, Texas. Hosted by Pamela Geller’s American Freedom Defense Initiative, a group listed as a hate organization by the Southern Poverty Law Center, the event drew international attention after two men who had allegedely declared loyaltly to ISIS opened fire near the exhibit. The armed men managed to wound one person before being shot and killed by police.[25]

Some people tried to draw comparisons with the January 2015 terrorist attack on the French satirical magazine Charlie Hebdo. These were  vigorously rejected by a Hebdo employee, Jean-Baptiste Thoret, who argued that there was “absolutley no comparison.” He told Charlie Rose that the group that put together the Muhammad cartoon contest was an “anti-Islamic movement,” whereas Charlie Hebdo was aimed at criticizing all religions, not Muslim people “in particular.”[26]

Some right-wing observers have favorably compared the rhetoric of leaders like Rep. Paul Ryan (R-WI)—Mitt Romney’s running mate in the 2012 presidential election—to Wilders’ stated views. In an August 2012 entry on the “Libertarian Republican” blog, contributor Eric Dondero praised Ryan’s defense of the term “Islamic fascism,” which the politician once argued expressed “the essence of the violent, extremist, religion-driven movement that confronts us.” Commented Dondero, “Ryan's viewpoint here sounds like something straight out of the mouth of Geert Wilders, Allen West, Michael Coren or Pamela Geller. Gotta love it!”[27]