Julie Finley, a founding member of the Committee for the Liberation of Iraq, is a former U.S. diplomat and long-standing political activitst. Described by the National Endowment for Democracy (NED), where she served on the board for four years, as “a prominent Republican Party activist,” Finley worked for many years as a Washington, D.C.-based GOP organizer and fundraiser, including as finance co-chair of the Bush-Cheney ’04 reelection team.[1] She served as U.S. permanent representative to the Organization for Security and Cooperation in Europe (OSCE) during the second Bush administration.[2] Finley also has a long tack record working on neoconservative-aligned advoacy campaigns concerning democracy promotion, NATO, and Russia. 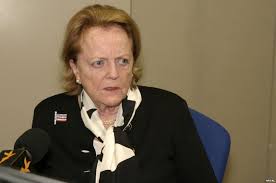 In September 2014, Finley co-signed an open letter coordinated by John Kramer of Freedom House that called for aggressive U.S. actions against Russia in light of the Ukraine crisis. “The bottom line is that Russia must end its invasion of and aggression toward Ukraine, withdraw its forces and fighters, rescind its annexation of Crimea, and end its use of energy and economic measures to punish Ukraine and its other neighbors,” the letter read. “Russia will never become the civilized state its citizens deserve without such a transformation.”[3]

The letter added: “Until Russia does so, the West must ratchet up serious sanctions against the Putin regime and immediately provide Ukraine with the full support, including military equipment and intelligence cooperation, it needs and has requested to defend itself.”[4]

Other signatories to the letter included a host of hawkish figures, including Jamie Kirchick of the Foreign Policy Initiative, Joshua Muravchik, and columnist Leon Wieseltier.[5]

Finley was a founding member in 1996 of the Bruce Jackson-led U.S. Committee on NATO (USCN), a group that advocated bolstering NATO so it could serve as an instrument of U.S. influence and military power. Its motto was “Strengthen America, Secure Europe, Defend Values, Expand NATO.” When USCN shut down in 2003, Finley, Jackson, and fellow USCN member Randy Scheunemann became founding members of the spin-off group Project for Transitional Democracies, which used the former USCN office space. Jackson served as president, Finley as board chair, and Scheunemann as treasurer.[6] The group, which “work[ed] with the countries of New Europe to foster economic and military ties with the United States,”[7] closed its doors in late 2004 or early 2005. The same trio founded the short-lived Committee for the Liberation of Iraq, which was formed in 2002 in order to promote the Bush administration’s vision of overthrowing Saddam Hussein and disbanded shortly after the U.S. invasion of Iraq.[8]

Finley served on the Board of Directors of the National Endowment for Democracy from 2001 to 2005, during which time she also served as NED treasurer;[9] Vin Weber and Francis Fukuyama joined the board at the same time as Finley. While serving on the NED board, the NED threw a reception in June 2003 honoring Sen. Mitch McConnell; Finley, who was serving on the NED board, hosted the reception as chair of the Project on Transitional Democracies.[10]

Long involved in Republican Party politics, Finley was national finance co-chair of Sen. Bob Dole’s (R-KS) 1996 campaign, a role she reprised in 2004 for Bush. She founded Republican Primary PAC, a now-inactive small-time political action committee that in 1998 raised $18,500 and $13,500 in 2000 for Republican candidates across the country.[11] But these amounts were miniscule compared to the money she typically secured as top fundraiser for the Republican National Committee’s so-called Team 100—donors who give more than $100,000.

During the 2000 presidential primary election season, the New York Times described Finley as “the queen of soft money—soft money being the large and unrestricted contributions that flow from the rich and powerful to the political parties, to be used for things like voter-registration drives and party advertising, much of this being barely disguised television spots for candidates.”[12] Finley was solidly in George W. Bush’s corner in his race against Sen. John McCain, the Times reported. “Although officially neutral until the nominee is selected—by law, she raises money for the party, not for any particular presidential candidate—she tells just about anyone who asks, ‘Privately, I am with Bush.’”[13]

Finley was a member of Council of Republicans for Environmental Advocacy (CREA), a group cofounded by Gale Norton that came recevied public attention during the Jack Abramoff corruption scandal after it was discovered that Abramoff had solicited donations for the group in an effort to gain access to Norton, who was by then George W. Bush’s secretary of the interior.[14] A Senate report determined that CREA and four other conservative nonprofits “‘perpetrated a fraud’ on taxpayers by selling their clout to Abramoff.”[15]

In 1992, Finley was a founding member of WISH (Women in the Senate and House) List, an organization dedicated to “recruit[ing] and support[ing] pro-choice GOP women candidates for Senate, Congress, and governorships.”[16] The New York Times opined in 2000, “Finley is herself a moderate, and she would like to see her party show a more compassionate face to the have-nots and to shed the strident, right-wing image that has put off many female voters.”[17] Her pro-choice stance cost her the RNC co-chair seat in 1997.

[8] Committee for the Liberation of Iraq, “Officers,”http://web.archive.org/web/20030802073337/http://www.liberationiraq.org/committee_officers.shtml.