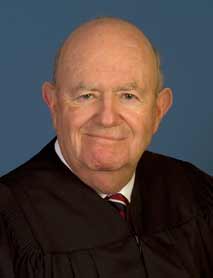 Laurence Silberman is a senior justice on the U.S. Court of Appeals for the District of Columbia, an influential court second only to the U.S. Supreme Court in importance. Appointed by President Ronald Reagan in the 1980s, Silberman is a longtime affiliate of right-wing and neoconservative organizations like the American Enterprise Institute (AEI) and the Federalist Society.

A close associate of Dick Cheney and Donald Rumsfeld dating back to the 1970s, Silberman was a key foreign policy adviser to Reagan’s 1980 presidential campaign. He gained notoriety at the time when he was linked with an alleged conspiracy to delay the release of American hostages in Iran—the so-called “October Surprise.” 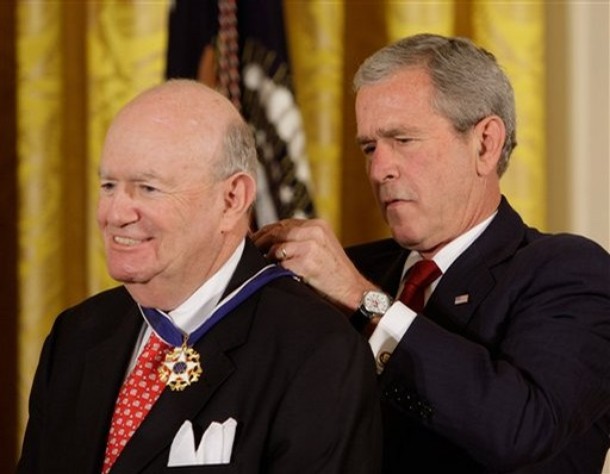 “Silberman boasts a history of service to Republican presidents and conservative causes unmatched by any member of any court, including the current Supreme Court,” noted a 2011 Slate profile. “Among many other entries, his résumé includes stints as acting attorney general during the Watergate crisis and as co-chair of George W. Bush’s 2004 blue-ribbon commission to investigate U.S. intelligence prior to the Iraq invasion. His judicial decisions include a vote to strike down the independent counsel statute threatening the Reagan presidency (in 1988) and the District of Columbia handgun ban in 2002. He was also awarded the Presidential Medal of Freedom in 2008 by George W. Bush.”[1]

David Brock—a right-wing journalist who later devoted himself to exposing Republican schemes—said that Silberman was “known among his colleagues for planting leaks in the press for partisan advantage.” Brock has noted, in particular, Silberman’s mentoring of the controversial Supreme Court Justice Brett Kavanaugh through their association to the Federalist Society. Brock reported that when “Kavanaugh took on the role of designated leaker to the press of sensitive information from [Bill Clinton Special Counsel Kenneth] Starr’s operation, we all laughed that Larry [Silberman] had taught him well. (Of course, that sort of political opportunism by a prosecutor is at best unethical, if not illegal.)”[2]

Silberman endorsed Kavanaugh for the Supreme Court seat left vacant by Anthony Kennedy’s retirement in 2018. Kavanaugh, Silberman declared, was “one of the most serious judges I’ve ever encountered. … He’s a much more disciplined judge than the man he’s replacing.”[3] Many considered Kavanaugh’s highly emotional performance at the Senate Judiciary Committee hearing investigating allegations of past sexual assault by Kavanaugh to be evidence to the contrary.[4]

Silberman also had high praise for Merrick Garland, the judge who had been nominated to replace Justice Antonin Scalia upon his death, and who was never even granted a hearing by the Republican Senate leadership. “He’s one of my best friends. I think the world of him as a human being. I think he’s an excellent judge,” said Silberman of Garland.[5] Despite such a strong endorsement from an arch conservative, Senate majority leader, Mitch McConnell (R-KY) boasted that “One of my proudest moments was when I looked at Barack Obama in the eye and I said, ‘Mr. President, you will not fill this Supreme Court vacancy,’”[6]

Silberman was an outspoken supporter of the Bush administration’s actions during the lead up to the 2003 U.S.-led invasion of Iraq. In February 2015, he denounced accusations that President Bush had ever lied about the reasons for going to war and brazenly compared such claims to the rise of the Nazis. “[I]t is one thing to assert, then or now, that the Iraq war was ill-advised,” wrote Silberman in a Wall Street Journal op-ed. “It is quite another to make the horrendous charge that President Bush lied to or deceived the American people about the threat from Saddam.”[7]

Silberman added: “I am reminded of a similarly baseless accusation that helped the Nazis come to power in Germany: that the German army had not really lost World War I, that the soldiers instead had been ‘stabbed in the back’ by politicians.”

In a rebuttal of Silberman’s op-ed, Jonathan Chait of New York Magazine wrote: “It is hard to believe that Silberman expects such a crude exercise in propaganda to actually succeed. His intention appears to be slightly more indirect: to turn the demonstrable fact that the Bush administration deliberately misled the public into, at the very least, a partisan dispute that journalists cannot repeat without fear of being accused of bias.”[8]

In 2004, Silberman was appointed by President George W. Bush to co-chair the purportedly bipartisan Commission on the Intelligence Capabilities of the United States Regarding Weapons of Mass Destruction. The other co-chair was former Sen. Charles Robb (D-VA), a Democrat associated with the neoconservative-aligned Democratic Leadership Council. The panel was putatively designed to investigate intelligence failures in the run-up to the Iraq War, but Silberman’s appointment spurred charges from critics that the president intended to stock the commission with like-minded individuals that would ignore allegations that the administration had hyped or politicized intelligence to make the case for war.

“Is retired federal judge Laurence Silberman the right person to co-chair the Iraq intelligence commission?” asked a briefing prepared by the liberal People for the American Way. “Those who know him … raise serious concerns about Silberman’s past activities, his temperament, his judgment, and his unyielding commitment to right-wing orthodoxy. After reviewing this criticism, along with Silberman’s own statements, it becomes clear that Silberman is ill suited for a role on the intelligence commission.” Noting Silberman’s long association with the right-wing Federalist Society, the statement added, “At an April 2002 [Federalist Society] event, Silberman advised Bush judicial nominees to avoid questions posed to them regarding their ideology or controversial issues. In fact, he took credit for stealthily guiding Justice [Antonin] Scalia through the confirmation process by avoiding such issues. Can a man who urges secrecy to protect his ideological compatriots be expected to uncover secrets as co-chair of the intelligence commission?”[9]

In his 2006 book State of Denial, journalist Bob Woodward reported that Vice President Dick Cheney had personally asked Silberman to chair the commission. Silberman told Woodward: “It was clear and understood that we would not be asked to evaluate the administration’s use of the intelligence. … And frankly, if that had been the charge I wouldn’t have wanted the position. It was too political. Everybody knew what the president and the vice president had said about the intelligence. They can make their own judgment as to whether that was appropriate or fair or whatever.”[10]

The commission concluded that there was “no political pressure to influence the Intelligence Community’s pre-war assessments of Iraq’s weapons programs.” Unlike the commission that had investigated the 9/11 attacks, noted Salon’s Joe Conason, “this panel was a creature of the president rather than Congress. It was placed under the control of Judge Laurence H. Silberman, a reliable, aggressive, and determined Bush advocate.” Noting that the panel’s conclusions were “hardly unexpected,” Conason added that “the world has known for many months that all of the confident assertions from the White House about mushroom clouds, aluminum tubes, uranium shipments, mobile biowarfare laboratories, flying drones, and stockpiles of poison gas were mythological. To blame the intelligence community for those blatant falsehoods is to absolve the rest of the Bush administration of any responsibility for the disasters that followed.”[11]

In 2012, Silberman ruled that torture victims at the notorious U.S.-run Iraqi prison at Abu Ghraib could not sue a government contractor whose employees were accused of participating in the abuse, arguing that the contractor shared the legal immunity extended to U.S. soldiers.[12]

Silberman, who co-chaired Ronald Reagan’s panel of foreign policy advisers during the 1980 presidential campaign, reportedly played a key role in setting up secret contacts between Reagan’s campaign team and the Islamic government in Iran, in what became known as the “October Surprise.” The purpose of these meetings has been widely disputed, but many observers have alleged that they were aimed at convincing Iran not to make a deal with then-President Jimmy Carter to release U.S. embassy hostages until after the November presidential elections.

“Silberman has been more involved with [perpetrating] cover-ups in the Middle East than with any attempts to unravel them,” said National Public Radio commentator Kevin Phillips in 2007. “In 1980, as part of that year’s Republican campaign, he attended at least one of the October Surprise meetings where an Iranian representative discussed what Iran would want in exchange for keeping the hostages.”[13] According to another account, Silberman had expected to be appointed CIA director for his role in the October Surprise and “flew into a rage” when the job was offered to Reagan’s campaign manager, William Casey. Instead, after a stint on the Pentagon’s Defense Policy Board, Silberman received a judicial appointment as a “consolation prize.”[14]

Silberman remained in close contact with his allies in the Reagan administration after his appointment to the federal bench in 1985. According to the Inter Press Service, after taking office, Silberman allegedly “passed along his Iranian contacts to Michael Ledeen, a close associate of Richard Perle at the American Enterprise Institute, who played a key role with [Robert] McFarlane in the transfer of U.S. weapons to Tehran in the deal that gave rise to the Iran-Contra scandal.” Silberman later cast the deciding vote in the decision to dismiss the convictions of John Poindexter and Oliver North for lying to Congress in connection with the scandal.[15]

Silberman remained politically active throughout the 1990s. The Inter Press Service described him as “a major, if discreet, figure in the right-wing network that harassed Bill and Hillary Clinton for various alleged scandals.”

According to David Brock, Silberman was a “mentor” who “would often preface his advice to me with the wry demurrer that judges shouldn’t get involved in politics—’that would be improper,’ he’d say—and then go ahead anyway.”[16]

Silberman reportedly advised right-wing activists on how to pursue allegations of sexual misconduct against President Bill Clinton, whom Silberman had accused of “declaring war on the United States” for permitting his aides to criticize independent counsel Kenneth Starr during the investigation of the Whitewater case.[17]

Surprising many observers, Silberman broke with other conservatives in a 2011 ruling upholding the “individual mandate” portion of the Affordable Care Act (ACA), a key legislative achievement of the Obama administration. In his ruling, Silberman unequivocally dismissed the argument of conservative activists that the mandate was an unconstitutional use of the government’s power to regulate commerce, concluding that the law’s challengers had failed to “find real support [for their case] in either the text of the Constitution or Supreme Court precedent.”[19]

The Washington Post noted at the time that Silberman was “the first Republican appointee to actually author an opinion that finds the health reform law, and its mandated purchase of health insurance, constitutional.”[20]Despite fervent Republican opposition to the law, an analysis from Slate argued that Silberman’s opinion was fairly consistent with mainstream legal conservativism. Before ACA’s passage, Slate noted, “almost all mainstream legal conservatives had—for nearly six decades—endorsed the post-New Deal Supreme Court’s consistent deference to legislators’ judgments about how best to regulate the national economy.”[21]

More recently, in 2014, Silberman sided with conservatives in a key ruling on net neutrality, arguing that the Federal Communications Commission did not have the power to prevent broadband providers from restricting the traffic capacity of their competitors or other Internet users.[22]

[1] Simon Lazarus, “May It Please the Court,” Slate, November 9, 2011,http://www.slate.com/articles/news_and_politics/jurisprudence/2011/11/the_outsized_influence_of_judge_laurence_silberman_s_decision_upholding_obamacare_.single.html.

[4] People for the American Way, “Laurence Silberman, the Right Man or the Right’s Man?” February 13, 2007, http://www.pfaw.org/press-releases/2004/02/laurence-silberman-the-right-man-or-the-rights-man.

[8] People for the American Way, “Laurence Silberman, the Right Man or the Right’s Man?” February 13, 2007, http://www.pfaw.org/press-releases/2004/02/laurence-silberman-the-right-man-or-the-rights-man.

[14] Simon Lazarus, “May It Please the Court,” Slate, November 9, 2011,http://www.slate.com/articles/news_and_politics/jurisprudence/2011/11/the_outsized_influence_of_judge_laurence_silberman_s_decision_upholding_obamacare_.single.html.

[16] Simon Lazarus, “May It Please the Court,” Slate, November 9, 2011,http://www.slate.com/articles/news_and_politics/jurisprudence/2011/11/the_outsized_influence_of_judge_laurence_silberman_s_decision_upholding_obamacare_.single.html.