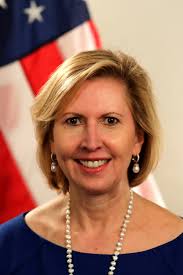 Mira Ricardel is the former deputy national security adviser under John Bolton who previously marketed high-tech weapons for Boeing. She is a foreign policy hawk and served in key positions in the administration of George W. Bush and, earlier, in the office of former Senator Robert Dole (R-KS).

In November 2018, a disagreement between Ricardel and First Lady Melania Trump’s office boiled over into public rancor. In an unprecedented statement, Mrs. Trump stated, “It is the position of the Office of the First Lady that she no longer deserves the honor of serving in this White House.”[1]

The clash between Mrs. Trump and Ms. Ricardel seemed to stem from a trip to Africa the First Lady took in October, but was emblematic of wider rifts between the staffs of the First Lady, the National Security Council, and the West Wing, led by John Kelly, the White House chief of staff who was known to have a difficult relationship with Ricardel, and an even more rocky one with her boss, John Bolton.

The neoconservative journalist Josh Rogin said of the affair, “The public shaming of deputy national security adviser Mira Ricardel by her own White House colleagues shows that bickering has now trumped national security in this administration. … It’s stunning and unprecedented for East Wing staffers to issue a public statement calling for the firing of a senior National Security Council official, without the approval of senior White House officials, to settle a personal grudge. What’s worse, anonymous White House staffers orchestrated a smear campaign that depicted Ricardel as a scheming, leaking, angry woman who picked a fight with the president’s wife.”

Rogin cited an administration official saying, “This is an all-out assault against Bolton by forces within the White House who are threatened by his ability to control the process, whether that’s on policy or travel arrangements or just influencing the president’s thinking. Mira did make some mistakes, but they are using this for a larger purpose than her.”[2]

Ricardel was known to be loyal to the agenda of Donald Trump and sensitive to the political goals of the president. When she was in charge of executive appointments, she examined potential appointees for loyalty to Trump, taking the view that support for the president’s agenda was a key qualification for a post, even above professional accomplishments and qualities.

Ricardel’s support for an ultra-hawkish foreign policy agenda was a major reason Bolton chose her as his deputy. Like Bolton, she is also known to have a forceful—even abrasive—personality, which many observers believed eventually led to her downfall. She was seen as part of a transition from a foreign policy team that would, at times, debate the president on policy to one which will support his views and focus on implementing them.

Ricardel also worked for a decade with Boeing, where she oversaw marketing of ICBM, anti-missile, and even focused laser weapon and defense systems.

In the Trump Administration

Ricardel was serving as Under Secretary of Commerce for Export Administration when Bolton tapped her as his deputy. Her appointment was part of a process by President Trump to reshape the decision-making apparatus on foreign policy into one where his directions would not be debated or questioned but enacted more quickly.

One conservative commentator, James Carafano—vice president for foreign policy at the right-wing Heritage Foundation—told the Washington Post, “It’s clear Trump wants foreign policy decision-making to move at a faster pace than it did in the first year. Bolton wants to drive the process and Ricardel is a driver, she is not a ditherer. And that’s what the president wants.”[3]

Ricardel had been working in the private sector when Trump brought her in as part of his transition team in late 2016. According to the Post report, “[T]he president-elect’s team was looking hard for national security-minded Republicans who hadn’t opposed Trump during the primaries and were willing to come aboard. An executive at Boeing at the time, Ricardel stayed out of the fray during the campaign but signed on soon after the election. She became a key White House official dealing with Defense Department personnel choices and overseeing landing teams at the National Security Agency.”[4]

In 2017, after Trump’s inauguration, Ricardel was posted to the Office of Presidential personnel. She was a major figure in vetting appointments, particularly in the Defense Department. This often brought her into conflict with Secretary of Defense Jim Mattis. One report stated, “A number of sources, including one inside the administration, said Mattis and Ricardel have directly clashed over nominees. Two of those sources speculated that Ricardel had hoped for a Pentagon position when the transition ended, perhaps as the undersecretary of defense for policy.”[5]

Ricardel replaced John Gallagher as the point person for Defense Department appointments because Gallagher was seen as too close to Mattis, while Ricardel was “viewed by the Trump leadership in New York as more attuned to the political interests of Trump.”[6]

Reports described the clash between Mattis and Ricardel as one where Mattis was seeking out qualified candidates while Ricardel was concerned with ideology and support for Donald Trump personally. In the end, Ricardel was given a post in the Commerce Department, removed from Mattis, but she remained very much in Trump’s good graces.

Her time at the Department of Commerce was, from all indications, largely routine and uneventful.

“Since coming on board, she has helped keep sensitive technologies out of the hands of those who would do us harm, while also working to ensure that imports do not threaten to impair our national security,” Commerce Secretary Wilbur Ross said of Ricardel in a statement congratulating her on her move.[7]

Ricardel began her career as a congressional affairs specialist and then a deputy director for congressional affairs in the Arms Control and Disarmament Agency in the State Department. She then worked as a legislative assistant for Senator Bob Dole and was a top advisor on defense and foreign policy to him in his 1996 campaign for president.[8]

After leaving the Bush administration, Ricardel went to work for Boeing, a major aeronautics corporation and one of the biggest defense contractors in the United States. She was at Boeing from 2006-2015. According to her bio, “Mira Ricardel is vice president, Business Development, Boeing Strategic Missile & Defense Systems (SM&DS), which delivers ICBM support, conventional strike and integrated missile defense solutions. SM&DS leads the development of critical advanced technologies, to include directed energy. Key programs include: the U.S. Ground-based Midcourse Defense System, Minuteman Sustainment, the Arrow Weapon System, Airborne Laser Test Bed, the High Energy Laser Technology Demonstrator and the Free Electron Laser. Ricardel leads the business development and marketing activities of the SM&DS division, to include strategy to address current and new markets, both domestic and international.”[10]