Rachel Abrams, who passed away in June 2013, was a writer who served on the board of the right-wing Emergency Committee for Israel (ECI). Known for her sharp tongue and vitriolic rhetoric, Abrams was the author of the blog Bad Rachel, which periodically made headlines for its over-the-top condemnations of liberals, Palestinians, critics of Israel, and anyone who happened to disagree with her views. Eulogizing Abrams’ passing, the Washington Free Beacon called her "a writer who did not care about politically correct convention," and praised her "gift for saying the things the rest of us were not supposed to say with verve and wit."[1]

Abrams was the member of a well-established family of neoconservative writers, pundits, and government officials. Her husband was Elliott Abrams, a veteran of both the Ronald Reagan and George W. Bush administrations who was convicted (and later pardoned) for his role in the Iran-Contra scandal; her mother, Midge Decter, has served on the board of the Center for Security Policy and was a founding member of the Project for the New American Century and the Reagan-era Committee for the Free World; her step-father, Norman Podhoretz, is a former editor of the magazine Commentary and a widely recognized trailblazer of the neoconservative movement (Norman’s son from another marriage, John Podhoretz, is currently editor of Commentary); and her sister, Ruthie Blum Leibowitz, is a columnist for the conservative Jerusalem Post. 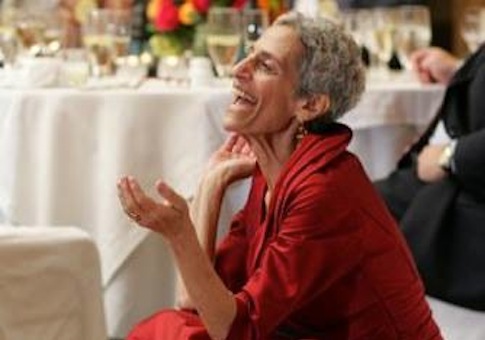 "If her parents Midge Decter and Norman Podhoretz and the late Irving Kristol were the intellectual leaders of neoconservatism," wrote Washington Post blogger Jennifer Rubin after Abrams' death, "then Rachel was the heart and soul that bound so many together."[2]

Abrams served on the board of the Emergency Committee for Israel, a Noah Pollack-led advocacy group established in 2010 in part to counter the Mideast policies of President Barack Obama. Other board members have included William Kristol, editor and founder of the Weekly Standard and cofounder of the Foreign Policy Initiative; and Gary Bauer, a well-know Christian Zionist who has helped lead pressure groups like American Values and Keep Israel Safe and serves on the executive board of John Hagee’s Christians United for Israel.

ECI’s response—signed by Abrams, her fellow ECI board members William Kristol and Gary Bauer, and ECI director Noah Pollack—attacked the IPF letter, arguing that “it’s puzzling to us why a small group of American Jews believes it appropriate to demand ‘painful territorial sacrifices” of Israelis.’”[4]

Jim Lobe and Eli Clifton commented on the ECI letter on LobeLog: “As their short list of signatures suggests, US Jews, in any event, don’t agree with ECI’s extremist views.” Clifton and Lobe pointed to results of surveys of Jewish Americans substantiating their argument.[5]

Abrams debuted her blog Bad Rachel in February 2010. Mostly tongue-in-cheek commentary and parodies of liberal officials, her commentary fervently defended the state of Israel and often angrily criticized anyone who disagreed with her views.

For instance, in an April 2012 post flagged by the Beacon, Rubin directed a fiery invective at liberal Jews and critics of Israel on Holocaust Remembrance Day. "[W]hile you’re whispering your 'love' for Israel in the tongue of anti-Semitism," she wrote, "while you’re sniffing the scent of our blood, we’ll be counting our dead, and when we’re done with that, we’ll be reminding you never to forget the mighty hand and the outstretched arm—and the long memory—of the Israeli Defense Forces."[6]

In October 2011, after the release of the Israeli soldier Gilad Shalit, who had been captured by Hamas in 2006, Abrams opined on her blog: “Celebrate, Israel, with all the joyous gratitude that fills your heart. … Then round up his captors, the slaughtering, death-worshiping, innocent-butchering, child-sacrificing savages who dip their hands in blood and use women—those who aren’t strapping bombs to their own devils’ spawn and sending them out to meet their seventy-two virgins by taking the lives of the school-bus-riding, heart-drawing, Transformer-doodling, homework-losing children of Others—and their offspring—those who haven’t already been pimped out by their mothers to the murder god—as shields, hiding behind their burkas and cradles like the unmanned animals they are, and throw them not into your prisons, where they can bide until they’re traded by the thousands for another child of Israel, but into the sea, to float there, food for sharks, stargazers, and whatever other oceanic carnivores God has put there for the purpose.”[7]

This tirade prompted popular conservative blogger Andrew Sullivan to nominate Abrams for a “Malkin Award,” which his blog awards “for shrill, hyperbolic, divisive and intemperate right-wing rhetoric.” (Sullivan cited Right Web’s profile of Abrams in characterizing her as a “neocon doyenne.”)[8]

In another revealing blog entry, Abrams described how she and her husband got lost while driving back from an Israel settlement in the occupied West Bank. “We are lost on an unfamiliar road in a part of Jerusalem neither one of us recognizes,” she wrote. “Uphill to our left is what looks like a techy office area; downhill to our right is the Zionist Racist Apartheid Wall. As we pass along at warp speed I say out loud to Mr. Leadfoot, the only person within earshot,  ‘F*** you, Arabs!’ Then rant on in my head so as not to further irritate an already irritated driver who hates getting lost and almost never does so: ‘This partition was their choice. They could have had their state sixty-three years ago, if only they’d accepted the original partition instead of going to war against the Jews. Blah, blah, blah.’ I’d be pacing back and forth if not for being trapped in a car.”[9]

After President Obama won re-election in November 2012, defeating Mitt Romney and running mate Rep. Paul Ryan (R-WI), Abrams was predictably bitter, writing: “We Jews have frequently enjoyed risking our own future in elections … and we’ve successfully done so once again.”[10]

Observers often noted Abrams’s tendency to place the term “Palestinians” in quotes, as if to question whether the Palestinians exist as a people and thus call into question their claim to Palestinian lands.[11] Additionally, as Daniel Luban of the Inter Press Service noted in 2009, Abrams “constantlyadopts the argot of the Israeli settler movement by referring to the West Bank as ‘Judea and Samaria.’”[12]

According to Luban, Abrams frequently mixed apparently homophobic sentiments with her “pro-Israel” views. Luban highlighted Abrams’ critique of an article by Peter Beinart in the New York Review of Books in which she parodies his voice: “While most of her Beinart ‘parody’ is devoted to accusations that he is insufficiently devoted to the state of Israel, a large chunk of it is spent on rather bizarre and gratuitous insinuations that Beinart is gay. Thus she has fake-Beinart complaining, about a focus group of Jewish students, that “an insufficient number were gay and too many were broads,” and espousing his support for ‘open debate that of course excludes those who would advance anti-feminist or anti-gay or pro-Israel argument.’ (It’s striking that she equates ‘pro-Israel’ with ‘anti-feminist’ and ‘anti-gay’ arguments.) Then she has fake-Beinart condemning Orthodox Jews for homophobia before defensively reasserting his own heterosexuality: ‘they condemn gays, though I want to reassert that I have children,” a trope that she repeats throughout the piece.’”[13]

Luban, who discovered a number of similar examples elsewhere in Abrams’ writings, noted that her apparently anti-gay tendencies are closely in line with those of her parents. “Abrams is a real piece of work, and seems pathologically incapable of hiding her obsession with (and distaste for) homosexuality. Perhaps it’s not surprising given her parents: Midge Decter was the author of the notoriously homophobic 1980 Commentary article ‘'The Boys on the Beach,’ while Norman Podhoretz’s particular brand of wounded, insecure, obviously-compensating hypermasculinity will be familiar to readers of essays like ‘My Negro Problem — And Ours.’”[14]

Unsurprisingly, Abrams was harshly critical of the Obama administration’s policies toward Israel. After the March 2009 meeting between President Obama and Prime Minister Netanyahu, she wrote: “What happened at yesterday's meeting between Bibi Netanyahu and Barack Obama was no more than a return to the U.S. policy of pressing Israel to endanger herself for the sake of whichever ‘strategic interest’ happens to be paramount at the moment—today it is our diplomatic opening to Iran that may be imperiled by a lack of progress on the establishment of a Palestinian state—and, of course, that ever-desirable, always-elusive siren, ‘peace.’”[15]

Six months later she lambasted Obama’s speech on the eve of the Jewish New Year in September of 2009: “The day after the Goldstone report maligns the Jewish State—which so cherishes human life it forces its soldiers to do everything humanly possible to avoid shedding the blood of the women and children behind whose skirts and baby carriages the enemy hides—by comparing it with Hamas—which uses the bodies of the innocent as shields—the president of the United States joins the jackals, suggesting the Israelis have something to learn in the way of tolerance and empathy from him. Really, he has no shame.”[16]

In another post, Abrams disparaged the Obama administration’s foreign policy and Secretary of State Hillary Clinton, writing, “The Obamic foreign policy, such as it is, seems to be being formulated and conducted as much (maybe more?) from the West Wing as from Foggy Bottom, and by people even less familiar with the issues than she, who’ve done almost nothing in their lives but run political campaigns—and that’s in Chicago, where a little cold hard cash and some cold stiff bodies voting at graveyard polling stations can get anyone elected—and who are still in essence running a campaign today, though they call it a presidency.”[17]

Abrams also singled out the Obama administration’s policies on Iran. As the deadline for negotiations approached at the end of 2009, Abrams compared the U.S. government’s policies to those of pre-Nazi Europe, writing, “The jettisoning of human rights, the accusation against predecessors, the willful blindness to reality, the active undermining of pro-democracy activist groups, all constitute a dangerous slouch toward the obscene cowardice that blighted Europe in the face of the Nazis. … Knowing we're with them, really with them, even if only in spirit, could save them, as every survivor of Soviet domination will attest; and in telling them so we could rediscover the moral center in our great fight in Iraq and Afghanistan.”[18]

Abrams was long a critic of Democratic Party politicians, whom she derided as the “educated, left-leaning, affluent professional class.” In 1994, in the midst of the Whitewater affair, she wrote in the conservative Washington Times,“I know something about Bill and Hillary Clinton right now. I know how their stomachs churn, how their anxiety mounts, how their worry over their defenseless child increases. I know their inability to sleep at night and their reluctance to rise in the morning. I know every new incursion of doubt, every heartbreak over bailing friends, every sting and bite the press gives, every jaw-clenching look at front-page photographs of Robert Fiske Jr., the special prosecutor. I know all this, and the thought of it makes me happy.”[19]

[3] Eli Clifton and Jim Lobe, “The Emergency Committee For Israel Speaks for itself and not much else,” Lobelog, April 5, 2013,http://www.lobelog.com/the-emergency-committee-for-israel-speaks-for-itself-and-not-much-else/.

[5] Eli Clifton and Jim Lobe, “The Emergency Committee For Israel Speaks for itself and not much else,” Lobelog, April 5, 2013,http://www.lobelog.com/the-emergency-committee-for-israel-speaks-for-itself-and-not-much-else/.