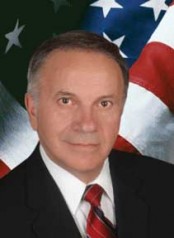 Tom Tancredo is a former member of the U.S. House of Representatives (R-CO, 1999-2009) who is notorious for his far-right views on immigration reform as well as his deep antagonism toward Islam. While in Congress, Tancredo founded the House Immigration Reform Caucus, which represents the nativist bloc within the Republican Party. He has also served as co-chair of the Team America PAC, which aims to “help elect to public office individuals who are committed to enforcing our laws and securing our borders.”[1]

A former candidate for the Republican presidential nomination, Tancredo’s campaign platforms have centered on alarmist claims about “illegal immigration,” which he says jeopardizes the nation’s security and heritage. When he declared his candidacy for the 2008 nomination on a right-wing radio show in April 2007, Tancredo said that he was uniquely qualified to deal with immigration, arguing in an official statement that “for too long Americans have been force-fed candidates who ignore or mock their valid concerns about the security of our borders, the enforcement of our immigration laws, and the survival of our national heritage. That ends today.”[2]

More recently, during the 2012 Republican nomination race—which he opted not to enter—Tancredo deployed his boilerplate rhetoric to attack Republican candidate Gov. Rick Perry. In particular, he charged the Texas governor with supporting a school curriculum about Islam and Muslims, who Tancredo implied were all violent extremists. In a September 2011 article for the Daily Caller, Tancredo wrote: “What is not yet as widely known about Perry is that he extends his taxpayer-funded compassion not only to illegal aliens but also to Muslim groups seeking to whitewash the violent history of that religion. Perry endorsed and facilitated the adoption in Texas public schools of a pro-Muslim curriculum unit developed by Muslim clerics in Pakistan.”[3] Tancredo than cited the discredited anti-Islam writer Robert Spencer of Jihad Watch, who characterized Perry’s curriculum as “a complete whitewash” that is “not going to give you any idea why people are waging jihad against the West.”[4]

Tancredo has a long track record of “Islamophobic” statements, which he often combines with anti-immigration diatribes and advocacy of hawkish U.S. foreign policies. A vocal supporter of the “war on terror,” Tancredo once argued that the United States should consider "tak[ing] out" Islam's holy sites if extremists detonated a nuclear bomb in the United States.[5]

During his failed presidential campaign, his website hyped a number of threats related to immigration and border control. Said one post on his campaign website: "The war America is already engaged in will not be fought like the wars of the past. After witnessing the tragic terrorist attacks against the nation, it is now time to coordinate the efforts of federal, state, and local agencies to provide better homeland defense. Tomorrow's attacker is more likely to board a commercial airliner bound for the United States with a tourist or student visa—or he may simply walk across our porous southern or northern border carrying a device in his backpack. These issues must be addressed. We are, I believe, in a clash of civilizations. That clash is fought on many fronts—some military, some diplomatic, and still others, ideological."

Borrowing from Samuel Huntington’s clash of civilization thesis, Tancredo claims that Islam and Christianity are battling each other. He once said, "Radical Islam has been the foe of Christendom for centuries. The most serious foe of Christendom. The battle ebbs and flows, peaks and becomes less intense, but it has been going on for centuries. We have never really been bothered by it, because the world was a place in which you could not really attack the United States physically. There were oceans separating us and if you did come, what were you going to come with? A gun, a rock, an arrow? But today it has all changed, it has taken on a different dimension. … This combination, massive immigration and radical multiculturalism … is a prescription for our own demise.”[6]

Tancredo has been a vocal proponent of regime change in Iran, arguing that the controversial People's Freedom Fighters (Mujahedin-e Kalq, or MEK) could be a vanguard for such an effort. Although identified as a terrorist organization by the State Department, Tancredo says "we should be aiding them, instead of restricting their activities. We can use the MEK; they are in fact warriors. Where we need to use that kind of force, we can use them.”[7]

Tancredo and Filner, the co-chairs of the Iran caucus, offered their support to a pro-MEK rally in Washington on January 19, 2006. In a letter to the rally organizers, the Council for Democratic Change in Iran, the co-chairs said: "We believe a possible alternative to the current government can be achieved through supporting the people of Iran and the Iranian resistance. … We extend our solidarity to you and to the Iranian people and their defiance against tyranny." Asked by UPI why he supported the redesignation of MEK, Tancredo, said MEK is an "asset to U.S. intelligence" and "the most reliable source of information for the region.”[8]

Tancredo was an enthusiastic supporter of the U.S. invasion of Iraq. His congressional website once stated: "The United States did not invade Iraq to conquer it, but rather to set it free. The United States does not stand to gain territory, oil, or any other spoils of war. We all should be proud of that sacrifice."

In another post, Tancredo said: "At the end of the Constitutional Convention in 1787, a lady asked Benjamin Franklin, 'What have you given us?' He replied, 'A Republic, if you can keep it.' We have purchased an opportunity for Iraq and the entire Middle East with the blood and treasure of America. It was a noble endeavor for which all who served can be immensely proud. It is now time to see if the Iraqis can take advantage of the opportunity and 'keep' what has been so dearly purchased."

Tancredo won his first seat in Colorado’s House of Representatives in 1976, serving two terms from 1977 to 1981. During this time, he teamed up with other social conservatives and new-right advocates to push for a number of socially conservative polices, as well as for slashing taxes and cutting social services.

In 1981, Tancredo, who before joining politics was a junior high school history teacher in Denver, was appointed to head the regional office of the Reagan administration’s Department of Education. In 1985, Tancredo used his position to distribute to teachers a Christian nationalist speech by a former colleague that called for a "truly Christian educational system" and bemoaned the "godlessness" in a country founded as a "Christian nation." Despite the ensuing controversy, Tancredo kept his position and was reappointed by President George H.W. Bush in 1989.[9]

From 1993 to 1998, Tancredo served as president of the Independence Institute, a rightist think tank located in Golden, Colorado. The institute weighs in on an array of state issues, including government spending, education policy, and social issues. Its Board of Trustees includes Coors Brewing's Jeff Coors, a philanthropist involved in right-wing foundations established by the Coors family, including the Castle Rock Foundation .

A three-term limit promise by the Republican incumbent in the Sixth District left a congressional opening that Tancredo filled in 1999. Like his predecessor, Tancredo promised that he would limit his tenure in the House to three terms, saying: "We want to reinvigorate the electoral process by introducing people into the system who think of government service as a temporary endeavor, not as a career." Years later, Tancredo suggested that his obedience to God absolved him of his term limit pledge. Referring to his decision to go back on his word, Tancredo said, "I do put it in God's hands and I say, 'Lord, I hope I'm doing what you want.'"[10] Tancredo served five terms in the House.

Although Tancredo's own district, including the well-to-do suburbs of Denver, did not have a significant immigration population, Tancredo early on adopted immigration reform as his personal issue. In May 1999 he founded the House Immigration Reform Caucus . Serving as the chair of this congressional group, Tancredo succeeded in widening the base of Republican lawmakers who believe that immigration restrictionism should be the position of their party, which has traditionally adopted the posture of its business wing and favored a ready supply of cheap labor. The caucus grew from 16 members in 1999 to 110 by fall 2007, including 8 Democrats.[11]

Tancredo also founded Team America, which bills itself as "a political action committee dedicated to securing our nation's borders." Angela "Bay" Buchanan, sister of Pat Buchanan, serves as Team America's co-chair along with Tancredo. According to Team America: "Illegal immigration is the most critical issue facing our nation today. The mission of Team America is to make this issue a significant part of the national political debate and to identify, recruit, and help elect to public office individuals who are committed to enforcing our laws and securing our borders."[12]

Like many other social conservatives who came into politics with the rise of the New Right in the 1970s, Tancredo regards politics as a fight between the grassroots and the liberal establishment, generally found on the East Coast. For Tancredo, immigration is a life-or-death issue in the culture war to save America, and he doesn't let party loyalties stand in the way of his efforts to wage this war. He has repeatedly revealed his independent streak, serving as the Constitution Party’s 2010 gubernatorial candidate in Colorado, and having his Team America PAC back restrictionist challengers to prominent Republican incumbents.