The controversial war hawk briefly served as Donald Trump’s national security adviser and was ambassador to the UN during...

Robert Joseph played a role manipulating U.S. intelligence to support the invasion of Iraq and later became a lobbyist...

A Pause in the Rush to War 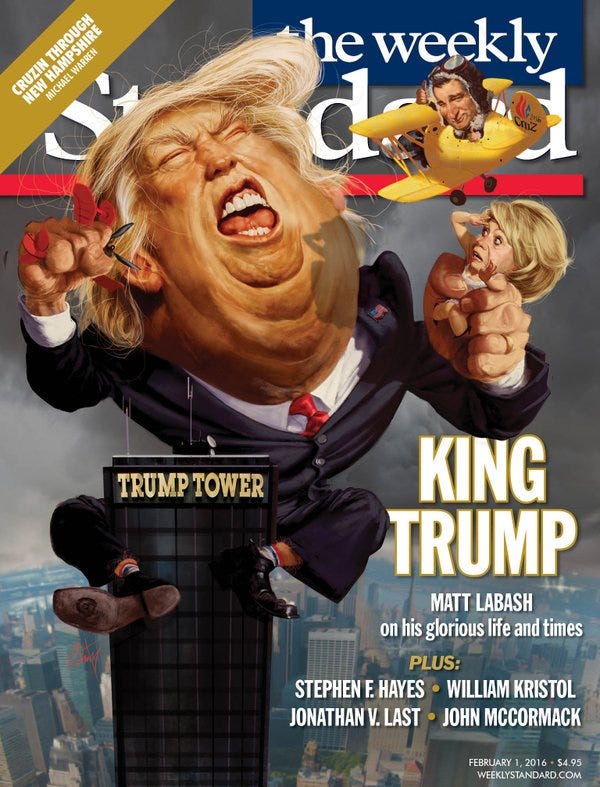 The Weekly Standard served as the flagship journal of neoconservative opinion and activism for more than two decades, from 1995 to 2018. Founded by William Kristol and Fred Barnes with financial support from Rupert Murdoch’s News Corporation, the magazine offered what Kristol termed “opinion journalism.” Shortly after its founding, the Standard quickly took on a leading role in neoconservative discourse that had formerly been played by Commentary magazine, which was once edited by William’s father Irving Kristol. The magazine published its final issue in December 2018. In a statement, the CEO of the magazine’s parent company, Clarity Media, said: “Despite investing significant resources into the publication, the financial performance of the publication over the last five years—with double-digit declines in its subscriber base all but one year since 2013—made it clear that a decision had to be made.”

During the Standard‘s final years, it found itself increasingly on the fringes of conservative opinion-making because of its strident opposition to Donald Trump. The lead headline after Trump was elected in 2016 read, “Donald Trump Is Crazy, and So Is the GOP for Embracing Him.” The magazine’s anti-Trump stance was reportedly the source of increasing tensions with Clarity Media. Its closure spurred speculation over whether “neoconservatism has been cast out of the Republican coalition,” as the New Yorker put it.

An Ideological Project of Billionaires

As a journal of the American Right, the Standard’s editorial coverage spanned both domestic and international affairs. However, the journal’s work on U.S. foreign policy, particularly during the years before and after the 9/11 attacks, gained the most attention. The Standard’s slate of editors and contributing writers clearly reflected the magazine’s distinctly militaristic and rightwing “pro-Israel” bent. In addition to editors Kristol and Barnes, the magazine received contributions from many prominent neoconservative writers, including Max Boot, David Frum, Reuel Marc Gerecht, Michael Goldfarb, Frederick Kagan, Robert Kagan, Irwin Stelzer, and John Podhoretz. Lee Smith, a fellow at the Foundation for Defense of Democracies, served as a senior editor, and several fellows at the American Enterprise Institute were frequent contributors.[1] Contributing editor Matthew Continetti was also the editor of the Washington Free Beacon, a “down-market version of the Weekly Standard.”[2]

For Murdoch, the Weekly Standard was less a business venture than an ideological project. For years, News Corp. ran the  Standard at a net loss of between $1 million to $5 million.[3] In June 2009, News Corp. sold the Standard to another billionaire conservative media mogul, Philip Anschutz, owner of the Denver-based Clarity Media.

The New York Times reported that the magazine was sold for about $1 million, “according to an executive close to Mr. Murdoch who spoke anonymously because the terms of the deal were meant to be confidential.” The Times highlighted the ideological significance of the “new ownership,” which “comes at a time when conservatism, especially the version espoused by the Standard involving American muscularity to spread freedom abroad, is not in the ascendancy. Mr. Anschutz, who made his billions in oil, real estate, railroads and telecommunications before turning to media, is more closely aligned with Christian conservatism, a thread not associated with the Standard.”[4]

Although the Standard has not been considered a mouthpiece of the Christian Right, neoconservative writers like those at the Standard have for decades forged an alliance with elements of the Christian Right in pushing aggressive U.S. overseas policies (see, for example, Right Web Profile: Project for the New American Century). According to the Times, since buying the magazine, Anschutz has “instructed the two top editors [Kristol and Barnes] … not to alter the publication’s ideological complexion.”[5]

Commenting on the sale, Michael Corcoran, a contributor to Extra!, a publication of Fairness & Accuracy in Reporting, wrote: “Rupert Murdoch’s unloading of the country’s most vigorously pro-war journal marks the end of a particularly sinister and regrettable era in the history of U.S. media.”[6]

Under Clarity Media’s stewardship, the Standard reportedly increased its subscriber base nearly 40 percent by 2010.[7] But the emergence of Donald Trump, whom William Kristol berated as a “loathsome” “con man,” initiated an inexorable decline of the magazine at Clarity. As one writer commented, “It’s not that there’s not an audience anymore. The reason is just that an owner said, ‘Nope, sorry, I’m not doing this anymore.’ ”

With the emergence of the Standard, a magazine closely linked to the American Enterprise Institute (AEI), neoconservatism’s role in political discourse underwent a dramatic change, shifting away from the pseudo intellectualism of early neoconservative journals like Commentary and the National Interest in favor of what Bill Kristol called “opinion journalism.” Instead of addressing itself to like-minded intellectuals, the Standard aimed to speak to power and to impact policymaking.[8]

In the forward to the book The Weekly Standard: A Reader: 1995-2005, Kristol writes that “some not insignificant number of people always assume that the Weekly Standard isn’t really published in English, but in code—that its contents are designed to advance a surreptitious political agenda. The Weekly Standard is a conservative magazine, of course. We make no bones about it. And ours tends toward a particular kind of conservatism; our pages are its home, we like to think. But that’s the point: The distinctive point of view in question has been worked out—and is still being worked out—on paper, in public, over the long haul. And it’s also the case that in those very same pages we have consistently and more or less routinely run authors who manifestly don’t agree with one another.”[9]

While Standard authors sometimes disagreed with one another, it was also the case that on many key issues there was broad agreement—in particular on a neoconservative foreign policy agenda. While some authors disagreed over the particulars of this agenda, the belief in the moral exceptionalism of U.S. power and a willingness to wield it remained core, overarching themes of the journal, insofar as its coverage of foreign affairs is concerned. It was also closely linked to the efforts of  neoconservative pressure group the Project for the New American Century (PNAC), cofounded by Kristol and Robert Kagan, which played an instrumental role in championing the invasion of Iraq in the wake of 9/11. The magazine often featured a number of figures who were linked to PNAC, including Reuel Marc Gerecht, Ellen Bork (daughter of the late AEI scholar and prominent Federalist Society member Robert Bork), Gary Schmitt, and Thomas Donnelly. It also regularly published the work of “scholars” based at AEI, which was housed in the same building as the now defunct PNAC, including David Frum and Danielle Pletka.

Kristol, Barnes, and John Podhoretz cofounded the Weekly Standard in March 1995 after meeting (along with David Tell of the Project for the Republican Future) with Rupert Murdoch at the Beverly Hills home of the international media mogul. The weekly newsmagazine published its first issue in mid-September 1995, “thanks to Murdoch’s generosity.”[10]

Fred Barnes came to the Standard from the New Republic, and John Podhoretz was a TV critic for the New York Post, also owned by Murdoch. In 1997 Podhoretz returned to the New York Post as an editor, and in 2007 he followed his father, Norman Podhoretz, as editor of Commentary.

At one point during the George W. Bush presidency, one of Vice President Dick Cheney‘s aides reportedly would stop by the Standard‘s office each Monday to pick up 30 copies of the magazine—presumably so the vice president’s staff could be among the first to know the latest policy recommendation emanating from the PNAC-AEI-Weekly Standard echo chamber. The Standard once boasted on its website: “Lots of Washington publications say they have influence. The Weekly Standard delivers it. The Standard‘s VIP distribution system is unrivaled by any other Beltway publication. Each issue is hand-delivered—by request—every Sunday morning to an exclusive list: the most powerful men and women in government, politics, and the media.”

It continued: “From the White House to congressional leadership to the top echelon of Washington’s print and broadcast journalists, every important player in the city gets a copy. Articles delivered on Sunday are the foundation of congressional debates the following week. Moreover, before breakfast on Mondays, 4,000 requested copies of the Standard are delivered—also by hand—to every Member of Congress, to congressional committees, and to federal agencies throughout the city.”

Commented media critic Eric Alterman: “The magazine speaks directly to and for power. Anybody who wants to know what this administration is thinking and what they plan to do has to read this magazine.”[11]

In an interview with the New York Observer regarding the neoconservative universe, Kristol suggested that “News Corp. should get a little spot on your map.”[12] Murdoch’s conglomerate has owned dozens of English-language newspapers, including New York Post and Times of London, in addition to Fox News, the Wall Street Journal, and the Standard. Murdoch’s personal involvement helped to ensure that almost all of his news organizations “have hewn very closely to Mr. Murdoch’s own stridently hawkish political views, making his voice among the loudest in the Anglophone world in the international debate over the American-led war with Iraq,” as one commentator put it.[13]

When asked how media outlets like Weekly Standard and Fox News Channel became so popular, Matt Labash, a Standard senior writer, opined: “Because they feed the rage. We bring pain to the liberal media … The conservative media likes to rap the liberal media on the knuckles for not being objective … It’s a great way to have your cake and eat it too. Criticize other people for not being objective. Be as subjective as you want. It’s a great little racket.”[14]

Arguably just as important to the Standard’s fortunes was the impact of 9/11, which Kristol said helped galvanize the magazine’s staff and led the pages of the magazine to be “thoroughly and persistently dominated by coverage of a global-scale war on Middle Eastern terrorism and despotism.”[15] As the anti-neocon American Conservative once put it, “One day a novel must be written that conveys the sense of purpose and energy that surged through the Standard‘s offices … in the days after September 11, 2001. For these bookish men, it was a Churchillian moment, an occasion to use words to rally a nation and shape history.”[16]

Writes Corcoran of Extra!, “For the next seven years, the Standard would become the birthplace of hawkish foreign policy proposals that would become official U.S. policy; as the magazine fought the war of words in the media, it helped its administration allies fight—and win—the battle of ideas in the White House. Following the attacks, the Standard advanced what became virtually all the noteworthy tactics of the Bush administration’s ‘war on terror’: focusing the response to 9/11 on Iraq using flawed and flimsy evidence (11/24/03), widening U.S. foreign policy interventions far and wide (11/01/04), dismissing all calls for even partial withdrawals of U.S. troops (5/10/07), shunning the recommendations of the realist-dominated Iraq Study Group (12/11/06), and escalating troop levels in what became known as ‘the surge’ (1/21/08). The rhetoric in the Standard‘s editorials and articles was often indistinguishable from that of the administration, as it downplayed war crimes committed by U.S. troops (6/12/06) and labeled antiwar activists and legislators as anti-American (8/14/06).”[17]

[8] For an account of the Standard’s operations during its first decade, see William Kristol’s Forward to The Weekly Standard: A Reader: 1995-2005, (New York, Harper Perennial, 2005).