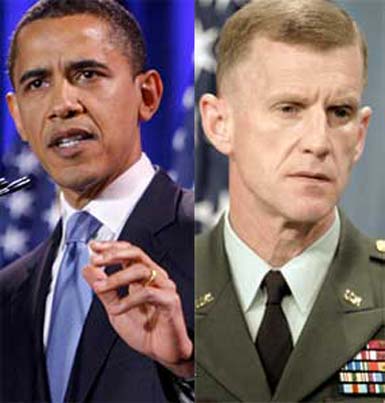 On June 22, 2010, Rolling Stone magazine published an article by Michael Hastings detailing his experiences embedded with Gen. Stanley McChrystal’s staff in Afghanistan. Hastings described a general and a staff that had little respect for civilian authority or for U.S. allies.[1] Within days, McChrystal, who had previously run afoul of the Barack Obama administration for openly criticizing Vice President Joe Biden, had been recalled, fired, and replaced by Gen. David Petraeus.

Shortly after news of the Rolling Stonestory broke, the hawkish Sens. Lindsay Graham (R-SC), John McCain (R-AZ), and Joe Lieberman (I-CT) called for General McChrystal’s resignation.[2] This call was echoed by Bill Kristol, editor of the Weekly Standard, who suggested that Obama should replace McChrystal with General Petraeus, then chief of Central Command.[3] The neoconservative academic Eliot Cohen made a similar argument in the Wall Street Journal, and Stephen F. Hayes developed Kristol’s argument in the Standard.[4]

Conservative acquiescence in the firing of General McChrystal represented a refreshing—and, at first blush, surprising—commitment to the principle of civilian control of the military. On the other hand, it may presage a campaign to lay the blame of a failed war in Afghanistan at the feet of the Democratic president. Since 2001, conservatives have strongly supported civilian control, in part because of military queasiness about the war in Iraq. However, today conservatives are using the principle of civilian control to place full responsibility for difficulties in the Afghanistan War on the shoulders of President Obama.

Conservatives’ leniency on civilian-military relations and acceptance of aggressive policy promotion by military brass goes back as far as the conflict between Gen. Douglas MacArthur and President Harry Truman during the Korean War. In that case, General MacArthur appealed directly to the U.S. public—and to Republicans in Congress—to promote his own strategic views. President Truman then fired MacArthur for insubordination, an act that earned Truman the condemnation of right-wing figures like Sen. Joseph McCarthy, who suggested that the president should be impeached.[5]

In the wake of the Vietnam War, conservatives again attacked civilian supremacy over the military. The idea that the U.S. effort in Vietnam had failed because civilian (and especially Democratic) politicians interfered too much in military decisions became an important trope in conservative politics during the 1980s and the 1990s.

This framing was destructive to civilian-military relations because it improperly attributed responsibility for political decisions to uniformed military personnel and distorted the traditional chain of command. The argument went something like this: We lost the Vietnam War because soldiers had “fought with one hand tied behind their back.” This perspective implied that the uniformed military had more of a right to determine issues like force escalation—which despite its battlefield implications is a supremely political matter, especially in democratic countries—than did civilians, and that civilian interference in such decision-making threatened the security of the nation.

Despite conservative hawkishness, relations between the GOP and the uniformed military have frayed since the 1990s. In 2004, 60 percent of military personnel identified themselves as Republican. By 2006 the number had fallen to 46 percent.[6] Many Republican intellectuals and political appointees lack military experience, even as they argue for hawkish policies, a fact that became a major source of criticism during the run-up to the 2003 invasion of Iraq, when many of the war’s biggest boosters had never served in uniform.[7]

Efforts by think tanks associated with the Democratic Party to develop keener military credentials also contributed to the strained relationship between the military and the Republican Party. Lawrence Korb, a naval reservist with extensive connections in both the military and civilian defense communities, joined the Center for American Progress in 2002.[8] The recently formed Center for New American Security (CNAS) has close ties to the Obama administration, and is led by Nathaniel Fick, a retired Marine Corps captain, and John Nagl, a retired Army lieutenant colonel. CNAS also employs retired military personnel Andrew Exum and David Kilcullen, and features a robust Military Fellowship program.

The honeymoon between the Republican Party and the uniformed military ended when Donald Rumsfeld began his tenure as Pentagon chief in 2001 with an aggressive series of steps intended to bring the senior military leadership into line. This set the tone for the George W. Bush administration’s relations with the military during the buildup to the Iraq War. Gen. Eric Shinseki was famously marginalized for testifying before the Senate Armed Services Committee that the invasion and occupation of Iraq would require 500,000 troops. Both Rumsfeld and his deputy Paul Wolfowitz reacted to this with strong language, and shunned Shinseki in later planning discussions for the Iraq War.

The emergence of an empowered neoconservative movement during the second Bush presidency seemed to spur some analysts on the right, like Eliot Cohen of the Paul H. Nitze School of Advanced International Studies in Washington, to rethink the relationship between military officers and civilian policymakers. An active contributor to movement conservative publications, Cohen is also a respected—if often controversial—scholar of national security and civ-mil relations.

A student of Samuel Huntington, whose Soldier and the State remains the seminal work on civ-mil relations, Cohen has held numerous positions in government and in the academy. He was a founding signatory of the Project for a New American Century and was a member of the Committee for the Liberation of Iraq, both of which were important vehicles for neoconservative advocacy during the lead up to the Iraq War. From 2007 through 2009, he served as counselor to the Department of State, having been selected for the post by then-Secretary of State Condoleezza Rice.

Cohen’s best known book is Supreme Command, a 2002 volume about historical relationships between senior military leaders and the civilians they served. This book reaffirmed the view that civilian authority should remain supreme even during war, and that the very best civilian leaders have taken a direct interest in the conduct and behavior of their military commanders.

Writing in the Weekly Standard, Michael Barone said of the book, “Every so often a book appears just at the moment when it is most needed—even though that moment was entirely unpredicted. Such a book is Eliot Cohen's Supreme Command, a superb study of civilian commanders in chief in times of war by the nation's leading scholar of military-civilian relations.”[9]

Matt Duss, a fellow at the Center for American Progress, conceded that Cohen was “a good writer on civil-military relations,” even if his other work had a neoconservative edge.[10]

However, as James Mann pointed out in his 2004 book The Rise of the Vulcans, Cohen’s writing on civ-mil relations had a partisan flavor. Cohen gained media attention when President Bush and other administration officials began appearing in public holding his book, just at a time when many military figures were pushing back against the rush to war in Iraq. Writes Mann, “Few recognized the symbolism and subtext of [Bush] carrying Cohen's book, the determination not to let U.S. military leaders play the powerful political role Powell had exerted at the time of America's first war with Iraq. [Dick] Cheney and [Paul] Wolfowitz certainly understood.”[11] However, Cohen later questioned the decision-making of the civilian architects of the Iraq War, arguing that they had allowed an incompetent leadership team to remain in power in Iraq following the invasion.[12]

To be sure, there are other concerns about the health of civ-mil relations in the United States. Military officers have found alternative methods of influencing policy that do not involve direct insubordination or the threat thereof. The military has become adept at using elements of the media to publicize the case for its preferred policy alternatives. (For more on military efforts to influence the policy process, see Michael Flynn, “The Surge of Ideas,” Right Web, June 16, 2010.)

Similarly, the military has developed close institutional relationships with many influential Washington think tanks, like the Center for a New American Security and the Institute for the Study of War, which can have an impact on policy-making.[13] McChrystal himself came under fire for advocating too strongly and too publicly for his plan in Afghanistan, leading to an implicit reprimand from President Obama.

Further, David Petraeus continues to play an outsized role in conservative appreciation of the military. President Obama’s decision to appoint Petraeus to take over in Afghanistan may explain some of the conservative acquiescence in the firing of McChrystal. Right-wing admiration for Petraeus began even before the relative success of the “surge” in Iraq, and many have suggested that Petraeus might be an attractive GOP presidential candidate.

Although Petraeus is no longer eligible to run in 2012 (regulations prevent a uniformed military officer from running immediately following his or her retirement) the possibility remains that Petraeus may, in the future, opt for a career in politics. In 2004, Petraeus penned a Washington Post op-ed suggesting that the situation in Iraq was improving, which some believe was intended to help the re-election prospects of President Bush.[14]

However, the acquiescence and approval of McChrystal’s dismissal on the right may in time yield to a misleading reassignment of blame for failure in Afghanistan to the Obama administration.

Conservatives have already undertaken some effort to put the blame for McChrystal’s firing on Obama. Eliot Cohen’s Wall Street Journalop-ed, for example, faults the president for assembling a dysfunctional politico-military team in Afghanistan, for conducting a long strategic review of the situation, and for suggesting a timeline for U.S. involvement. While the first of these critiques may have some merit, the latter two echo discredited Republican rhetoric about the importance of decisiveness and the willingness to wage war without end.

In July 2010, Kimberley and Fred Kagan continued the effort to place responsibility for failure in Afghanistan at Obama’s feet in the Weekly Standard, arguing that Petraeus would need a renewed commitment to victory in Afghanistan from the president. In the same issue, Bill Kristol called for Obama to renounce his June 2011 deadline for reassessing the Afghanistan operation.[15]

To be sure, McChrystal had also received some criticism from conservatives for placing severe restrictions on the ability of soldiers in Afghanistan to call in air and artillery support during firefights.[16] These restrictions were geared towards reducing Afghan civilian casualties, a crucial part of winning the acquiescence of the Afghan population.

These critiques also recall Vietnam-era arguments about U.S. troops fighting with hands tied behind their back. By and large, however, movement conservative publications such as the Weekly Standardand the National Reviewsupported the COIN tactics that McChrystal had attempted to establish.

The reaction of right-wing elites to the cashiering of McChrystal represents a genuine improvement over the historical attitude of conservatives toward civ-mil relations. Most importantly, conservatives have affirmed civilian supremacy over the military, even in the context of a Democratic president lacking military credentials.

However, this affirmation carries some warning signs. In the future, conservatives may well use the McChrystal firing as part of a “stab in the back” narrative, explaining how a Democratic president lost an otherwise winnable war by declining to take military advice. While every indication suggests that Obama acceded to all of McChrystal’s requests on doctrine and troop strength in Afghanistan, future attacks may nevertheless use the McChrystal firing as a touchstone in the conservative narrative of the “war on terror.”

Robert Farley is an assistant professor at the University of Kentucky’s Patterson School of Diplomacy and International Commerce and a contributor to IPS Right Web (http://www.rightweb.irc-online.org/). His last article for Right Web, “The Nuclear Posture Attack,” was published in June 2010.