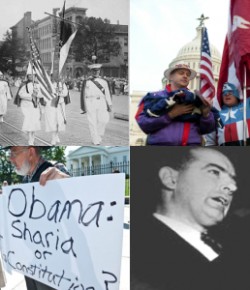 The mass killings in Norway have caused recriminations on both sides of the U.S. ideological divide. Some observers have highlighted Anders Behring Breivik’s keen interest in American anti-Muslim bloggers like Pamela Geller, Daniel Pipes, Robert Spencer, and Andrew McCarthy. These writers and other purveyors of anti-Muslim paranoia are scrambling to deny or minimize their culpability. Most notably, the Rupert Murdoch papers in Britain have insisted on labeling Breivik a neo-Nazi, in spite of his avowed identification with the militarist Israeli right.[1]

Critics have also lambasted efforts by some U.S. media outlets to label Breivik a “Christian fundamentalist.”[2] This is a vitally important point to understanding the larger pathology of anti-Islamism. Whereas those who traditionally speak of a “clash of civilizations” refer to a struggle between the “Judeo-Christian West” and “Islam,” the anti-Islamism circulating through the “West” is neither historically Jewish nor Christian. Rather, it is best understood as what the neocon propagandist David Gelernter calls “Americanism: The Fourth Great Western Religion,” with the other three being Judaism, Catholicism, and Protestantism—pointedly excluding Islam.[3]

Nearly fifty years ago Richard Hofstadter published his classic The Paranoid Style in American Politics, which provides a wealth of insights for understanding anti-Islamism today. One of Hofstadter’s brilliant insights was what we might term his “projection principle”:

“It is hard to resist the conclusion that this enemy is on many counts the projection of the self, both the ideal and the unacceptable aspects of the self are attributed to him. The enemy may be the cosmopolitan intellectual, but the paranoid will outdo him in the apparatus of scholarship, even of pedantry. Secret organizations set up to combat secret organizations give the same flattery. The Ku Klux Klan imitated the Catholic Church by donning priestly vestments, developing an elaborate ritual and an equally elaborate hierarchy. The John Birch Society emulates Communist cells and quasi-secret operation through front groups, and preaches a ruthless prosecution of the ideological war along lines very similar to those it finds in the Communist enemy.”

The episode that revealed the new anti-Islamism in all its ugliness was last year’s chorus of opposition to the construction of a Muslim community center two blocks from the World Trade Center site. Notorious right-winger Pamela Geller’s crusade against the center was a clarion call for anti-Islamism—indeed, Geller pervasively influenced Anders Breivik’s screeds. Opponents of the proposed Muslim center claimed the site is “sacred ground,” revealing again the paranoid style of anti-Islamism. This is a direct analogy to the Klan’s priestly vestments—“Ground Zero” is the holiest site in Gelernter’s “fourth great western religion,” which non-believers are not fit to desecrate by their presence.

More broadly, this belief in “Americanism”—or, as it is most often called by the right today, “American exceptionalism”—is the militant worldview composed of pathologies its adherents have projected on to their Muslim “enemies” for the last decade. Hofstadter would have recognized all too clearly the paranoid style animating the belief that the better part of the Islamic world does not hold legitimate grievances against the United States over its foreign policies, but rather that “they hate us for our freedom.” Thus the basis of the utterly preposterous belief that there is a threat of the imposition of “sharia law” on Western societies or that the non-violent activism of groups like the Muslim Brotherhood poses a more dangerous threat than al-Qaeda. Indeed, Hofstadter wrote:

“Since the enemy is thought of as being totally evil and totally unappeasable, he must be totally eliminated—if not from the world, at least from the theater of operations to which the paranoid directs his attention. This demand for total triumph leads to the formulation of hopelessly unrealistic goals, and since these goals are not even remotely attainable, failure constantly heightens the paranoid’s sense of frustration.”

For media liberals and others to smugly ascribe this paranoid style as the province of the nationalist right is therefore dubious at best, and arguably a deliberate avoidance of the more disturbing questions it raises. The U.S. media is complicit in the belief that “the world” is “at war” with some kind of global Islamist conspiracy against all that is right and true. Coverage of the Norway attacks proved the media’s inherent bias—witness the conflation of the word “terrorism” with an Islamic conspiracy.[4]

Probably no author has more elaborately theorized a great cosmic struggle straight out of Hofstadter’s Paranoid Style between the enlightened West and “Islamofascism” than the self-styled “democrat of the left” Paul Berman. Berman, most recently in the news because of his obsession with the Oxford-based Muslim philosopher Tariq Ramadan, expressed his thesis in The Flight of the Intellectuals, a rambling treatise of which reviewer Lee Siegel wrote, “He argues his weirdly outdated concepts with such fury because he is really trying to make a case for his own importance.”[5] The explicitly stated premise of these writings—that western liberals refuse to confront the malevolent presence of “Islamist ideas” in their societies—is indistinguishable from the hard-right screeds of Andrew McCarthy or Daniel Pipes warning of the threat of a non-violent “creeping shariah.”

There is one commonality in the paranoid style that Hofstadter’s theory misses, but which Peter Beinart prominently recognized during last year’s Manhattan mosque controversy.[6] Beinart observed that both McCarthyism and the 1920s Klan emerged at times when the United States was confronted with the limits of its power in the world—during the Korean War and the aftermath of World War I, respectively. Moreover, both emerged when the problems they were ostensibly addressing were already largely resolved: the 1920s Klan emerged as Catholic and Jewish immigration was slowing down and the immigrant communities were integrating into U.S. society, and McCarthy only emerged on the national stage when the U.S. Communist Party had already entered irreversible decline.

Likewise, as the United States is just beginning to confront the abject failure of its so called “war on terrorism,” a large section of the U.S. public is overwhelmed with anxiety over the fact that September 11, 2001 was not, after all, the day that “changed everything.” Indeed, the most often heard grievance of the Tea Party movement is that there is a war on their sacred shibboleth of “American exceptionalism,” and this rather than either racism or concern about the national debt, is what is at the core of the movement. The Tea Party and anti-Islamists draw on the narratives of fear and conceit fostered by the U.S. media. If we want to know what created Anders Breivik, we must look beyond the anti-Muslim bloggers who schooled him, and begin to ask what in U.S. politics and society has enabled those purveyors of hate and paranoia in the first place.

Jack Ross, a contributor to Right Web (https://rightweb.irc-online.org/), is the author of Rabbi Outcast: Elmer Berger and American Jewish Anti-Zionism and presently at work on a complete history of the Socialist Party of America.