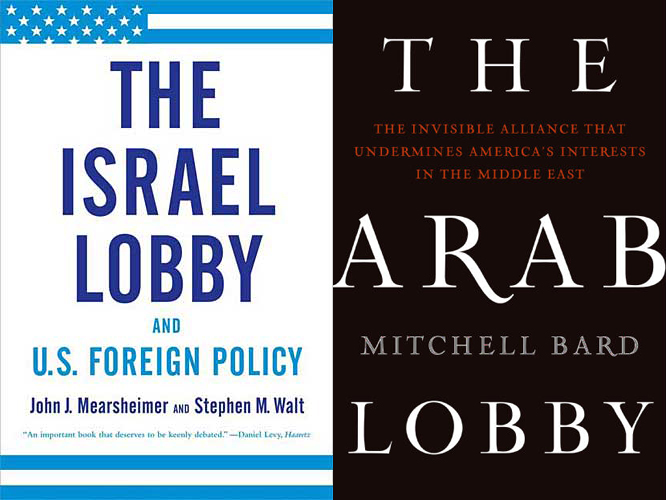 A covert organization, deeply embedded in the American political establishment, is actively working to undermine a rational Middle East policy. With powerful lobbyists, a massive grassroots and campus presence, and seemingly limitless resources, this lobby aims to maintain American troops throughout the region, build up its weapons arsenal, and silence those attempting to assert their independence from its hegemonic rule.

This narrative seems strikingly similar to many of the talking points used by critics of pro-Zionist organizations operating within the Beltway. However, for Mitchell Bard, a former editor for the American Israel Public Affairs Committee (AIPAC), it is the definition of what he terms the “Arab lobby.”[1]

In his 2010 book The Arab Lobby: The Invisible Alliance that Undermines America's Interests in the Middle East, Bard alleges that while critics of U.S.-Israeli relations focus on the purported influence of Israel-aligned organizations, the real threat to U.S. interests in the region is—and has been for decades—a covert alliance of anti-Semitic Washington insiders, Palestinian activists, oil and weapons companies, Middle Eastern dictators, and Arab-Americans who, Bard believes, have “manipulate[d] public opinion and foreign policy, often beyond public view, in ways that have gone largely unnoticed and demand greater scrutiny.”[2]

Although lauded by the usual suspects like the neoconservative outlet Commentary and Alan Dershowitz, the book has been panned by mainstream critics, who argue that it is conceptually flawed, factually dubious, and colored by starkly ideological views. For instance, according to Newsweek, the book inappropriately confuses oil interests with pro-Palestinian movements, and degenerates into “a litany of examples of AIPAC outflanking the pro-Saudi and pro-Palestinian lobbies.” Newsweek added that the book should have been “written by a real historian, not a lobbyist disguising truthiness as actual fact.”[3]

However, lost in much of the conversation surrounding the book itself is a complex dynamic regarding Middle East power and influence in Washington. In fact, elements of the so-called Arab and Israel lobbies work in tandem to advocate militarist U.S. foreign policies. Standing in opposition to this formidable alliance—and playing no role in the “Arab Lobby”—are various Arab civil society groups and their allies in Europe and the United States, who are working to reduce the U.S. military presence in the region.

Characterizations of the “Israel Lobby”—such as Stephen Walt and John Mearsheimer’s depiction of a “loose coalition of individuals and organizations who actively work to steer U.S. foreign policy in a pro-Israel direction”[4]—are often prone to criticism for oversimplification and excessive generalization.

Nevertheless, there is increasing acknowledgement among observers that the disproportionate political influence of U.S.-based organizations and individuals ideologically committed to Israel has led to an unbalanced U.S.-Israeli relationship that is hurting both U.S. interests and Israel’s long-term security.

In response, a growing chorus of largely right-wing actors—including the likes of Bard, Daniel Pipes, and Steven Emerson—have sought to divert blame by conjuring an opposing boogeyman. Borrowing a tactic from the Walt and Mearsheimer playbook, these ideologues conflate a number of different political and economic groupings under the same heading: the Arab Lobby.

It makes little sense to lump together the energy and arms ambitions of states such as Saudi Arabia with organizations working to demilitarize the Middle East. Still, there is one component of this heterogeneous cluster that bears serious consideration, especially insofar as it appears to encourage U.S. militarism in the region in much the same way Israel’s hawkish supporters do.

The influence of the oil-producing Arab states is beyond doubt. The Saudi regime has leveraged its vast wealth to retain its power, build its military capabilities, and solidify its status as a regional power. In September, the Obama administration proposed the largest arms sales in U.S. history to Saudi Arabia, including $60 billion worth of fighter planes, helicopters, and other assorted weapons.[5]

Despite the rancor the proposed sale is causing in Congress,[6] there appears to be bipartisan consensus that the weapons will benefit U.S. interests. Much like the U.S. multi-billion dollar annual military aid to Israel, the weapons are intended to help maintain the status quo in the region.

Neoconservatives present the dynamic between Arab and Israel groups as a zero-sum conflict that pits the lobbying power of Israel against the limitless pocketbooks of Gulf petro-states.[7] But the fact is, there is a lot of overlap between Arab and Israeli interests, calling into serious question some of the basic ideas behind the notion of an “Arab lobby.”

While in the past, notably in the 1980s, Israeli lobbying groups worked to stymie U.S.-Saudi arms deals, today the Saudi and Israeli governments frequently cooperate to maintain the current balance of power and secure steady U.S. military support. Eager to block the potentially destabilizing effects of Palestinian nationalism, the Saudis have consistently pressured Palestinian leaders to give in to Israeli demands.[8] In addition, official Saudi media has been frequently criticized for its connections to the Israeli government, and several prominent Saudi sovereign funds have invested heavily in Israeli infrastructure.[9]

Israel, for its part, has supported current Saudi policy by silently acquiescing to the proposed arms sale,[10] a tremendous sea change from the days when Tom Dine and AIPAC battled to prevent Reagan administration weapons sales to Saudi Arabia. Even more telling, Israel has covertly assisted Saudi Arabia on a number of military initiatives against Iran, Yemen, and other regional states.[11] This cooperation results from shared policy objectives aimed at constraining Arab populism and Iranian ambitions, and bolstering U.S.-sponsored “stability.”

If Saudis and Israelis appear more prone to cooperation than antagonism these days, the actual fault line of the lobbying conflict is not found in ethnicized lobbying arms connected to state geopolitics, but rather between pro-militarist forces and populist movements in the Middle East and their Western supporters. The fundamental error of Mitchell Bard’s conception of the Arab Lobby is the association of disparate—and diametrically opposed—groups under a single umbrella, based on little more than a common language.

A far more accurate depiction of the battle over Middle East influence would place both Saudi Arabia and status quo forces in Israel on one side, advocating a steady import of advanced weapons, the perpetual presence of U.S. troops, and the stifling of democratic aspirations of oppressed majorities. On the opposing side would be activists and isolated politicians opposed to foreign occupations, militarization, and outside influence in the Middle East.

Of course, the homogenization of Arab political players is a common enough occurrence, but this particular conflation not only fails to take into account shared Arab and Israeli interests; it also delegitimizes other anti-militarist movements by fabricating an association that simply does not exist. Rather than sharing objectives, Saudi-led oil interests remain separate and distinct from organizations working toward greater popular empowerment and rights, including Palestinian national groups, human rights organizations, and opposition political parties.

Despite pronouncements in support of Arab causes emanating from media outlets in Egypt, Saudi Arabia, and other aligned states, these propagandistic proclamations should not be mistaken with actual strategic priorities. Though oil interests have paid lip service to Palestinian causes, they have been far more supportive of Israel’s vision of the Middle East. As Mitchell Bard’s book notes, the Saudis “never want to get involved [with supporting Palestinians] because they believe they are already in an ideal position.”[12]

The so-called Palestine Lobby wields no significant power, nor has it had much success in its efforts to improve relations with the U.S. policy establishment. Unlike other components of the “Arab Lobby,” Palestinian activists are not well-funded or well-connected, do not employ entrenched lobbyists, and cannot hope to match the lobbying power of their opponents. These activists tend towards grassroots advocacy in their quest for greater balance in U.S. relations with the Israelis and the Palestinians—in fact, they are one of the few groups with legitimately anti-militarist ambitions in the Middle East. Tellingly, some factions of the pro-Palestinian movement have reserved their bitterest complaints not against Israel or the West, but other Arab states.[13]

There is no Arab Lobby, at least not one that reflects Bard’s vision. As wealthy Gulf States advocate for their own objectives, they have little time or patience for rabble-rousers attempting to “upset the boat.” Israel is not a danger to Saudi Arabia, nor vice versa. But the governments of both these states along their supporters, in the pursuit of their ideological and material interests as well as encouragement of continued U.S. military intervention, pose a danger to civil society throughout the region.

Jewish organizations working for a demilitarized Middle East—such as J-Street, Israel Policy Forum, and Jewish Voice for Peace—should be similarly disaggregated from their more militarist counterparts. J Street in particular has been vociferous in its condemnation of the Israeli occupation and the use of overwhelming military force in Gaza. It should be noted, however, that J Street continues to support U.S. efforts to maintain “Israel's qualitative military edge” as “an important anchor” for the peace process.[14]

A naive depiction of competing ethnic factions—Jews against Arabs—fails to provide a framework for understanding the diverse, cross-cutting goals of Arab-based organizations and their competing interests. The drive to militarize the Middle East stems from shared interests of entrenched powers, be they Israeli or Arab. The unfortunate victims of their militarized agendas and oil-influenced policies are the people of the region, from dispossessed Palestinians to discriminated Shi’a of Yemen.

The predilection of the U.S. government to flood the Middle East with ever-increasing supplies of weapons is closely linked to the lobbying efforts of hawkish “pro-Israel” groups and their right-wing Arab counterparts. The spiraling violence these policies have engendered continues to represent a serious liability to U.S. foreign policy objectives, comprehensive peace settlements, and of course the lives and livelihoods of besieged Arab populations.