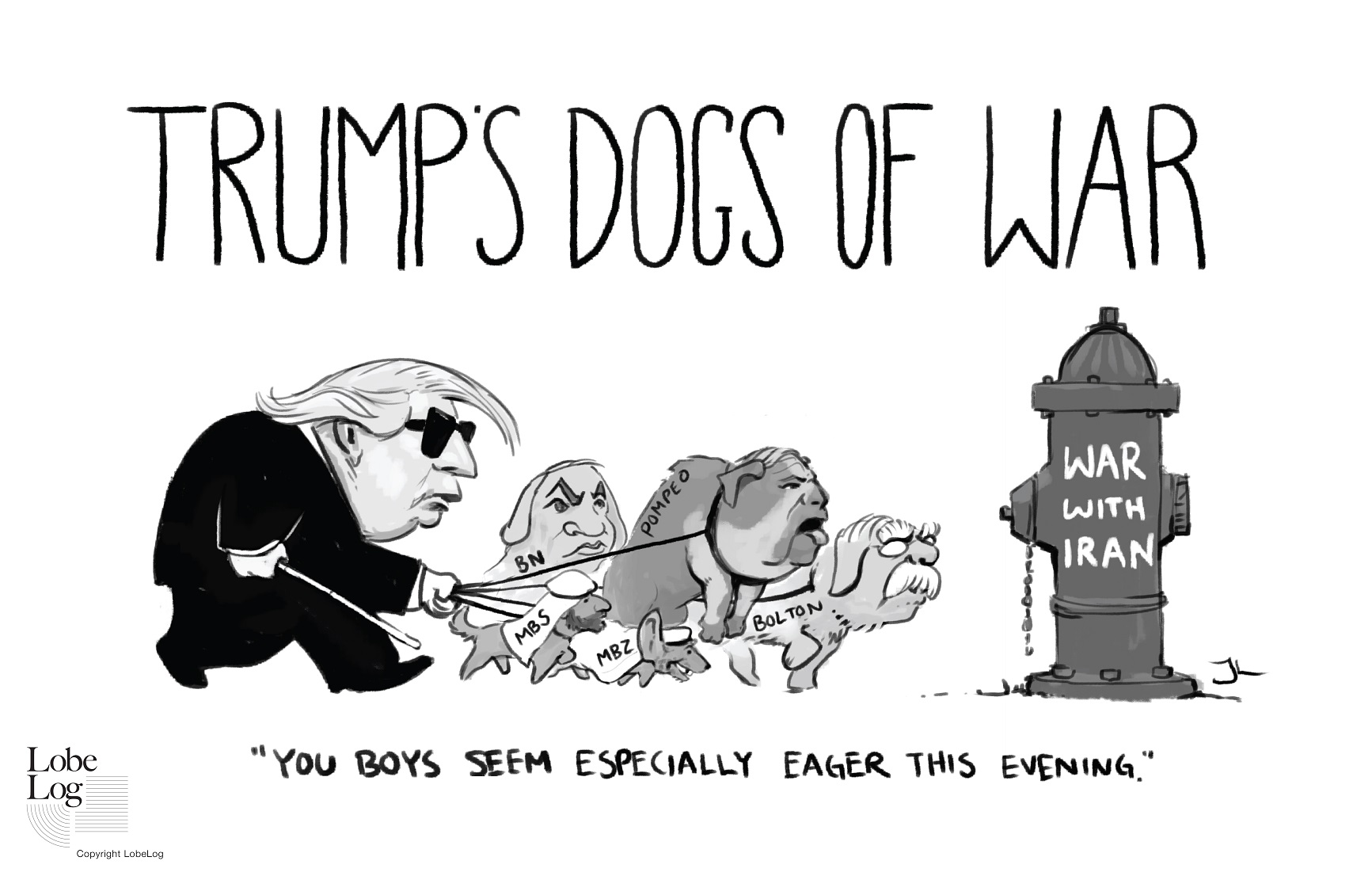 (Lobelog) This is the cartoon that the international edition of the New York Times should have run, at least as regards U.S. policy toward Iran.

Since Trump took power in January, 2016, LobeLog has repeatedly featured posts (most recently yesterday’s by Paul Pillar, “Bolton’s War”) by serious foreign-policy and regional experts warning of the possibility – and now increased likelihood – of a military conflict with Iran, despite Trump’s own apparent aversion to the idea of U.S. forces becoming engaged in yet another war in the Greater Middle East.

Once the team of John Bolton and Mike Pompeo was appointed nearly 14 months ago, and particularly since the departure of Pentagon Secretary James Mattis at the end of last year, it was abundantly clear that not only was Washington going to withdraw from and sabotage to the degree that it could the 2015 Iran nuclear deal (JCPOA), but that those governments that have made no secret of their desire to see U.S. military intervention against Tehran would feel greatly encouraged. They include, of course, Saudi Arabia (led by Crown Prince Muhammad bin Salman, or MBS), the United Arab Emirates (UAE) led by Crown Prince Mohammed bin Zayed al Nahyan, or MBZ) and Israel (led by Binyamin Netanyahu). (Bahrain, of course, would also be included in the coalition, but there are only so many leashes that Trump can handle.)  That all of these countries have, with Washington’s strong support, been pursuing closer intelligence and even military cooperation as a de facto anti-Iran axis is also not a secret.

Of course, there are also U.S. domestic constituencies that support military confrontation with Iran, most notably the membership of the Republican Jewish Coalition (RJC) of whom Sheldon and Miriam Adelson, the biggest individual donors to the GOP in the 2018 election cycle and to the Trump campaign in 2016, are perhaps the most famous or infamous. Bolton probably owes his job to the Adelsons who had long promoted him for a top foreign-policy position once they moved to support Trump’s presidential candidacy in the spring of 2016. Most Protestant evangelical leaders, whose devotion to Israel derives from a peculiar British 16th-century interpretation of the Book of Revelations, and who are thus ardent Zionists for theological reasons, have also consistently supported Netanyahu’s belligerence and threats against Iran. Pompeo, who has worn his Christian evangelical faith on his sleeve with, among other things, his occasional references to The Rapture, clearly identifies with that camp which constitutes a core Trumpist constituency. But, as with Bahrain, they were omitted from the cartoon for mainly aesthetic reasons.

The artist who drew the cartoon is Jonah Lobe, and this is his Twitter handle.