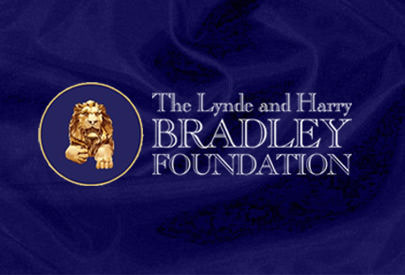 The Lynde and Harry Bradley Foundation has been called "the country's largest and most influential right-wing organization" because of the volume of grants it distributes each year, a large number of which go to supporting a network of neoconservative-led groups.[1] However, in terms of total assets, the foundation barely makes it onto the list of the largest 100 foundations in the United States. At the end of 2013 it had $922 million in assets, making the 91st largest.[2] From 1985 to 2012, the total value of the foundation’s contributions was roughly $827 million.[3]

The foundation provides funding to a variety of organizations, including think tanks, advocacy groups, media and legal organizations, and religious and philanthropic institutions. According to one writer: “Bradley Foundation-funded ideas, as well as political leaders who turn those ideas into action, have helped drive America's conservative revolution over the past quarter-century.”[4]

Some of the foundation’s grantees—notably the Hudson Institute, the American Enterprise Institute (AEI), and the Heritage Foundation—have played important roles shaping public discourse on U.S foreign policy, although the foundation's priorities tend to be domestically oriented. For instance, the foundation helped lead the right-wing campaign to have the government support faith-based programs, an effort that President George W. Bush praised in July 2002 at the Milwaukee Holy Redeemer Institutional Church of God in Christ—a Bradley grant recipient.[5]

Based in Milwaukee, the foundation is seen as a close ally to Wisconsin Gov. Scott Walker, who is widely considered a leading potential candidate for the 2016 GOP presidential nomination. Michael Grebe, Bradley’s executive director and CEO, has served as either the chair or co-chair of Walker’s election campaigns in 2010, 2012, and 2014. Grebe is also a retired partner of the Foley & Lardner law firm, whose clientele has included prominent Republican organizations and figures, like Florida Senator and 2016 Republican presidential candidate Marco Rubio. Grebe previously served as a Republican national committeeman for Wisconsin and was a state co-chairman of Ronald Reagan’s 1984 presidential campaign.[6]

Bradley board members Dennis Kuester and Art Pope were also significant financial donors to Walker’s gubernatorial campaigns, having given more than $100,000. “The biographical information about the Bradley Foundation board members would appear to make board meetings seem more like gatherings of the Walker presidential campaign finance committee,” Nonprofit Quarterly has said of the connection between Bradley and Scott Walker. “It is a political cast that makes the Bradley Foundation look nothing like a place where Grebe and his colleagues can possibly shut off their common interests not only in Republican electoral politics, but perhaps even more specifically the aspirations of Scott Walker for higher office.”[8]

Betsy Woodruff of The Daily Beast has said of Walker’s ties to Bradley: “Bradley-backed groups have helped expedite Walker’s ascent to power, and their success shows just how much clout wealthy donors and strategic activists can have on the way a state gets governed.”[9]

The Milwaukee Wisconsin Journal Sentinel has stated that the Bradley Foundation has been a “financial backer behind public policy experiments” that began in Wisconsin and were later applied in other parts of the country. The Journal Sentinel stated these have included “welfare reform, public vouchers for private schools and, this year, cutbacks in public employee benefits and collective bargaining.”[10]

Some analysts have said Bradley will be a strong supporter of Walker’s potential 2016 presidential bid. “Bradley and Grebe were central to Walker’s rise to national prominence four years ago, when he rolled back the power of government unions. They’ll probably be equally key to his almost-certain presidential bid,” opined John McCormick in a March 2015 piece for Bloomberg.[11]

In 1903, Lynde Bradley and Stanton Allen founded what would become known as the Allen-Bradley Company, a manufacturer of rheostats—instruments that controlled electrical currents—in Milwaukee, Wisconsin.[12] Lynde's brother Harry became a co-owner. After Lynde died in 1942, his assets were used to create the charitable Lynde Bradley Foundation.[13] In 1985, the instrument company was sold to Rockwell International, and much of the proceeds went to the foundation, which had by then changed its name to the Lynde and Harry Bradley Foundation.[14]

Harry Bradley belonged to the right-wing John Birch Society and was a frequent contributor to the National Review.[15] Both Lynde and Harry were conservative philanthropists who believed in "American democratic capitalism" by way of "free representative government and private enterprise." Thus, Bradley's programs "support limited, competent government; a dynamic marketplace for economic, intellectual, and cultural activity; and a vigorous defense at home and abroad of American ideas and institutions."[16]

Beginning in the late 1970s, Bradley played an important role in fomenting neoconservatism through its support of AEI, often considered home base for that political faction. Commenting on this period, Irving Kristol, a key intellectual architect of neoconservatism, writes that AEI's efforts to recruit neoconservatives in the 1970s and 1980s was "facilitated by the appearance on the scene of a rejuvenated Bradley Foundation and John M. Olin Foundation."[17]

Michael Joyce, described by Kristol as "an accomplished neoconservative thinker in his own right,"[18] served as president of the Bradley Foundation from 1985 to 2001; he had earlier been president of the now-defunct Olin Foundation.[19] Hillel Fradkin is a past Bradley vice president, and William Kristol, son of Irving, served as a project director at the foundation in the early 1990s.

Recipients of Bradley funding must be in line with the foundation’s “program interests,” which it describes on its website as revolving around five major themes: “strengthening American democratic capitalism”; “supporting limited, competent government”; “defending, at home and abroad, American ideas & institutions”; “supporting a dynamic marketplace for economic, intellectual, and cultural activity”; and “recognizing that responsible self-government depends on enlightened citizens.”[20]

Many of Bradley's grantees are among the leading organizations of the right wing, particularly among neoconservatives, some of which played instrumental roles in shaping and promoting the "war on terror" policies of the George W. Bush administration. In 2013, Bradley gave money to a host of neoconservative organizations and other groups espousing hardline foreign policy nationalism, including: American Enterprise Institute, Hudson Institute, Manhattan Institute, Heritage Foundation, Federalist Society, Institute on Religion and Public Life, Ethics and Public Policy Center, American Foreign Policy Council, Foundation for Defense of Democracies, Foreign Policy Research Institute, the Institute on Religion and Democracy, Hoover Institution, among many others.[21]

Government-connected institutions also obtain grants from Bradley. The National Endowment for Democracy received $80,000 in 2007 in part for the publication of The Journal of Democracy,[22] and the International Republican Institute received $26,000 in 2003.[23]

Past grantees have included the neoconservative Project for the New American Century ($200,000) and Marquette University, which received $20,000 for a research project on Norman Podhoretz.[24]

The Bradley Foundation has also been cited as a sponsor of the “Islamophobia network” in the United States. According to a 2011 report by the Center for American Progress, Bradley has funded an array of groups promoting Islamophobia and militaristic U.S. foreign policies in the Middle East, including the David Horowitz Freedom Center, Frank Gaffney’s Center for Security Policy, and Daniel Pipes’ Middle East Forum.[25]

Bradley supports Encounter Books, a conservative publishing house, by funding Encounter for Culture and Education, Inc., giving it more than $1 million in 2007 alone.[26] Encounter's most popular titles include David Horowitz's Indoctrination U.: The Left's War Against Academic Freedom; Willful Blindness: A Memoir of the Jihad, by Andrew McCarthy of Foundation for Defense of Democracies; Londonistan, by Melanie Phillips; and Climate Confusion: How Global Warming Hysteria Leads to Bad Science, Pandering Politicians and Misguided Policies That Hurt the Poor, by Roy Spencer.[27]

The foundation annually distributes up to four $250,000 prizes to "innovative thinkers and practitioners whose achievements strengthen the legacy of the Bradley brothers and the ideas to which they were committed."[28] Past recipients have included Victor Davis Hanson, John Bolton, Robert George, Mary Ann Glendon, Leon R. Kass, and Charles Krauthammer.[29]

In 2011, Bradley awarded a Bradley Prize to former Florida Governor and potential 2016 Republican presidential candidate Jeb Bush. “Governor Bush has been at the forefront of education reform,” said Bradley President and CEO Michael Grebe at the time. “During his administration and since, Florida students have made incredible gains. He has also been a vocal advocate for school choice.”[30]

[6] Philanthropy Roundtable, "Board of Directors," http://philanthropynewsdigest.org/news/argosy-foundation-ready-to-make-a-difference

[12] Rockwell Automation, "Who We Are: Our History," http://www.rockwellautomation.com/global/about-us/history/overview.page?.