The John M. Olin Foundation, once one of the country's premier conservative foundations, closed down in 2005 after a half century of operations. Among its more notable grantees were the Heritage Foundation, the Federalist Society, and the Hoover Institution. In discussing the closing, Olin director James Piereson said: "I guess I would say, looking back on this period, that it's worked out a lot better than we had any right to expect when we started. I'm sure some stuff failed or didn't go anywhere, but not a lot of it."[1]

The foundation grew out of the Olin Corporation—an ammunition and chemical business—in 1953, when John Merrill Olin began his philanthropic efforts, supporting his alma mater, Cornell University, and a few other causes. However, by 1973, Olin had adopted a specific strategic vision, stating at the time: “I would like to use this fortune to help to preserve the system which made its accumulation possible in only two lifetimes, my father’s and mine.” From then on, the foundation was explicitly geared towards defending “America’s tradition of free enterprise and individual liberty.”[2] 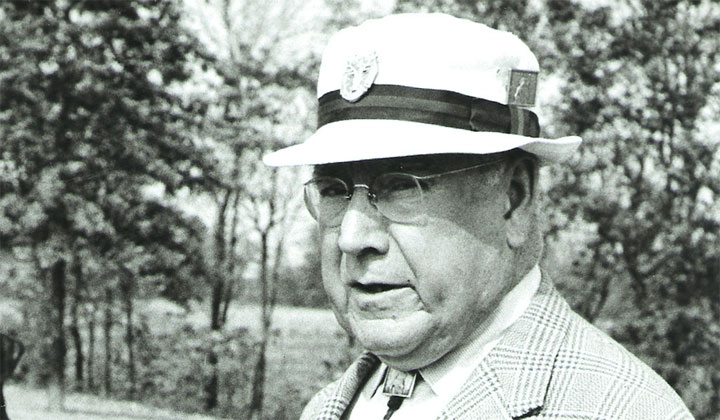 The foundation provided financial support to efforts to promote capitalism and fend off what John Olin saw as encroaching socialism. It became a major backer of right-wing think tanks, policy institutes, colleges, and academics.[3] Observers have noted that over the course of several decades, the foundation’s “savvy underwriting shaped the direction and aided the growth of the modern conservative movement that first sprang into visibility in the 1980s.”[4]

John Olin envisioned the foundation to last no more than 25 years after his death. As such, in 2005, the foundation had its last board meeting, made its final round of grant-making decisions for subsequent years, and shut down.[5]

A staunch supporter of the anti-communist right in the United States, the foundation was a key booster of neoconservatism beginning in the 1970s, especially at the American Enterprise Institute, considered the premier neocon think tank in the United States. Irving Kristol, a key intellectual architect of neoconservatism, writes that AEI's efforts to recruit neoconservatives in the 1970s and 1980s was "facilitated by the appearance on the scene of a rejuventated Bradley Foundation and John M. Olin Foundation."[6]

The foundation was also a prominent booster of militarist policies in the post-Cold War period. According to scholars Jean Stefanic and Richard Delgado, in the early 1990s, Olin "withdrew support from the Cato institute following its position on foreign policy specifically its opposition to all foreign military engagements, including the Persian Gulf War."[7] Along with AEI, many of whose scholars helped shape the "war on terror" policies of the President George W. Bush, Olin was also a key supporter of other neocon-aligned groups like the Hudson Institute.

The foundation was also a supporter of numerous hawkish organizations, like the neoconservative Project for the New American Century and the Center for Security Policy, to which it gave in total $46,000 and $1.2 million respectively up until 2005. It also contributed large sums to the David Horowitz Freedom Center, giving the organization over $2.2 million from 1989 to 2005, and the Foreign Policy Research Institute, which received more than $1.2 million during 1985-2005.[8]

John Olin ran the Foundation until 1977, when he chose former treasury secretary William E. Simon to succeed him as president. Olin said at the time that he created the foundation in an effort "to see free enterprise re-established in this country. Business and the public must be awakened to the creeping stranglehold that socialism has gained here since World War II.''[9]

Olin's successor, Simon, was an aggressive Wall Street investor and effective fundraiser. He served under Presidents Nixon and Ford and later became president of the United States Olympic Committee, where he helped lead the boycott of the 1980 games in Moscow. In his 1979 book, Time for Truth, Simon wrote: "Funds generated by business … must rush by the multimillions to the aid of liberty … to funnel desperately needed funds to scholars, social scientists, writers, and journalists who understand the relationship between political and economic liberty. [Business must] cease the mindless subsidizing of colleges and universities whose departments of economy, government, politics, and history are hostile to capitalism."[10]

Michael Joyce, a guiding light of right-wing philanthropy in the United States until his death in 2006, succeeded Simon as Olin's president and remained in that post until 1985, when he was tapped to run the Lynde and Harry Bradley Foundation. Joyce served as chairman of the Philanthropy Roundtable, a position he held while at Bradley. Irving Kristol once dubbed him the "godfather of modern philanthropy."

James Piereson served as Olin's last executive director. He also served as secretary of the foundation's board of trustees at the time of its closing. Those serving with him at the time included Eugene F. Williams Jr., Chairman; George J. Gillespie III, President and Treasurer; and Peter M. Flanigan, Richard M. Furlaud, and Charles F. Knight.[11]

After leaving the Olin Foundation, Piereson joined the Manhattan Institute, a conservative think tank that received substantial contributions from Olin over the years.[13][14]

Together with a host of like-minded foundations, Olin is credited with having played an integral role in establishing the organizational foundation for the emergence of the New Right.[15] In a 1997 report for the National Committee for Responsive Philanthropy, Sally Covington wrote: "By the early 1980s, journalistic reports in the Washington Post, Esquire magazine, the Pittsburgh Post-Gazette, and the Columbia Journalism Review were highlighting the important role that the Koch, Olin, Smith Richardson, Sarah Scaife, and other foundations were playing in building the organizational base of the right."[16]

In its efforts to turn back what it saw as the rampant liberalism and socialism at U.S. universities, the foundation supported the work of some of the country's most notorious right-wing academics, including Roger Kimball, Charles Murray, and Dinesh D'Souza.[19] The foundation also backed a passel of rightist campaigns on college campuses—including the movement to end affirmative action—through its support of Linda Chavez's Center for Equal Opportunity, the Independent Women's Forum, and the American Civil Rights Institute. Over the years, they received a combined total of $3.3 million from Olin ($1.6 million, $776,000, and $900,000, respectively).[20]

Despite its apparent antagonism to higher learning (former director Pierson once said that liberal academics "don't like American capitalism, American culture, and they don't like American history—they see it as a history of oppression"[21]) the foundation was a major donor to elite universities, which were by far the largest recipients of Olin money during its final two decades in operation. The top six Olin grantees during 1985-2005 were Harvard University, the University of Chicago, Washington University, Yale University, the University of Rochester and Stanford University, which received a combined total of about $100 million during the period, much of which was in the form of general support grants.[22]

Olin also worked to keep think tanks in line with its policy views. Covington writes that AEI once lost Olin funding in the 1980s. "Judging from AEI's own statements, the institution … moved to assume a more aggressive and conservative public policy role, perhaps owing to conservative efforts to 'defund' the think tank during the mid-1980s when some judged its research orientation to be too centrist. In 1986, the Olin and Smith Richardson foundations withdrew their support from AEI because of substantive disagreement with certain of its policies, causing [then-President William] Baroody to resign in the ensuing financial crisis."[23]

[13] Minding the Campus, “About Us,” http://www.mindingthecampus.org/about/.