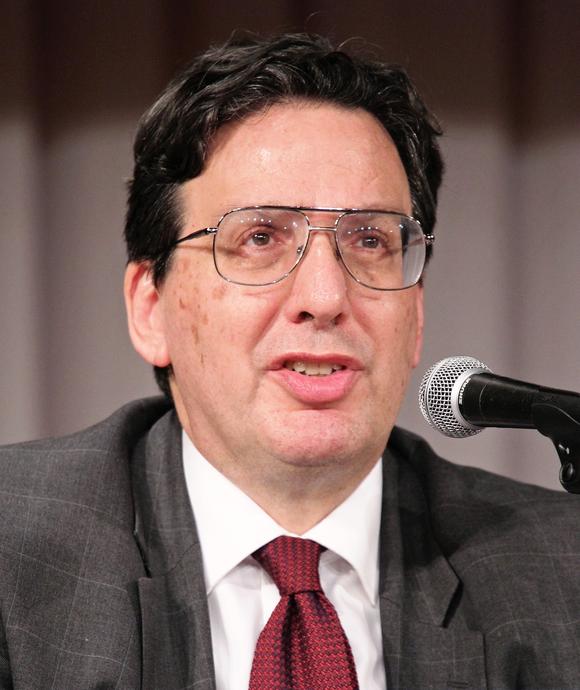 Arthur Waldron is the University of Pennsylvania’s Lauder Professor of International Relations and the vice president of the International Assessment and Strategy Center (IASC), a rightist think tank based in Alexandria, Virginia, that purports to focus on “medium and long-term security issues and their impact on the security of the United States and her key interests and allies.”[1] He is a high profile China hawk who has served as a government adviser on China policy and supported the work of a number of militarist and neoconservative advocacy groups, including the Project for the New American Century (PNAC). He has been associated with the so-called Blue Team, an informal group on China policy that emphasizes the purported threat to U.S. security posed by the Asian nation.

Among his affiliations, Waldron was a member of the advisory board of the Center for Security Policy,[2] a contributing editor to Family Security Matters,[3] a director of Asian studies at the American Enterprise Institute,[4] signatory on several PNAC letters concerning Hong King and Taiwan,[5] and a member of the board of directors of Freedom House.[6] As of 2015, he was a board member of the Jamestown Foundation and a senior fellow at the Foreign Policy Research Institute.[7] 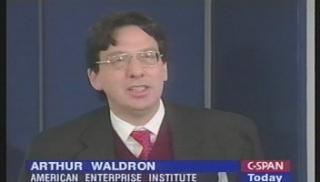 In a February 2016 email to Right Web, Waldron wrote, “I can only express gratitude for the care and accuracy with which you track my activities.” He wittily added, “Occasionally when I can’t remember, I look you up.” He also appeared to be concerned about the numerous associations with neoconservative groups that his Right Web profile documents, writing: “I am NOT a neoconservative, in favor of U.S. intervention all over the place. I am a conservative who thinks we should identify carefully what is and is not our interest. My basic passion is human rights, even for the Chinese.”[8]

Waldron was part of the China Futures Panel, convened by congressional Republicans in 2000 “to examine charges of bias in the CIA assessments of China,” and led by Gen. John Tilelli. Similar to earlier right-wing efforts to discredit the CIA—like the Team B episode in the late 1970s—the panel reported that it felt the agency had an “institutional predisposition” toward China.[9]

In February 2001, Waldron was appointed by then-Sen. Trent Lott (R-MS) to the China Security Review Commission to participate in a congressionally mandated survey of the “national security implications of the economic relationship between the United States and China.”

The commission’s July 2002 report included a chapter on the “Additional Views of Commissioners,” in which Waldron asserted that increases in Chinese military spending were “aimed at excluding the United States from Asia, and establishing the ability to threaten and coerce neighboring states ranging from Mongolia to Japan to India.” Waldron also wrote, “Only democratic change can transform China into a genuine friend of the United States and her allies.” (In a dissenting view, commissioner William A. Reinsch, undersecretary of commerce during the Clinton administration, criticized Waldron and his fellow commissioners for “consistently impl[ying] the Chinese deserve blame for acting in their own interest rather than ours.”)[10]

Waldron was associated with the Blue Team, a network of politicians, congressional staffers, journalists, lobbyists, and analysts who pushed for a hard line from Washington on China-related issues. Others associated with the Blue Team included William Kristol, editor of the Weekly Standard; Richard Fischer of the Jamestown Foundation; former Pentagon adviser Michael Pillsbury; and Bill Gertz of the Washington Times.

Waldron has long been an advocate of a more hardline U.S. position towards China, declaring in a 2011 speech that “autocratic China’s ever-increasing entanglement with the free world is my chief source of worry.” He opined in the same address: “I find it astonishing how we are able to carry on routine relations with China even as that country is torturing dissidents and groups such as the Turks and the Tibetans, constraining the press ever more tightly, and still relying on a manipulated exchange rate to underpin her export advantages.”[11]

Waldron has also censured the U.S. government for pursuing “meaningless military to military contact with China” and “giving up real interests to get them.” He has claimed that one reason the United States pursues such an approach towards China is because the “Chinese government is increasingly influential in internal American decision-making processes.”[12]

In September 2015, ahead of a state visit by Chinese President Xi Jinping to the United States, Waldron stated in Foreign Policy that the “Xi visit should have been canceled.” Instead of welcoming Xi, he argued, the United States should have “made clear something we dare not: namely that sanctions that bite are the alternative.”[13]

Waldron has also written critically of Henry Kissinger’s 2011 book, On China. Waldron opined in a review of the book for the neoconservative Weekly Standard that the former Secretary of State—who orchestrated the United States’ opening towards China during the Nixon administration—presented an “account of China” in his book that is “so flawed that it probably would not pass muster in a good university master’s degree program.” Waldron also claimed that Kissinger’s book reflected a “clear deference to the account of China’s history that is today official in China.”[14]

In the run up to the 2008 Summer Olympics in Beijing, Waldron expressed disappointment in the George W. Bush administration’s response to China’s crackdown on protests in Tibet. He wrote in the neoconservative magazine Commentary: “[Henry] Paulson’s understatement, and the President’s avoidance of the issue, are products of the administration’s initial assumption that, after a quick and decisive Chinese crackdown, the March unrest in Tibet would prove no more than a bump on the road to the triumphant Beijing Olympics in August. American interest was therefore to stick with China’s government, even if doing so involved some substantial trimming of American values.”[15]

In July 2010, Waldron said that the United States needed to rollback Chinese influence in Asia. Discussing disputed Chinese sovereignty claims regarding the South China Sea, Waldron told the Associated Press, “At some point actions, in this case Chinese, force reactions. [The U.S. has] allies in the region for whom suddenly being washed or surrounded by Chinese territorial waters would come as a shock. So [the U.S. has] the unattractive choice of doing something, or doing nothing and losing [its] allies and [its] reputation.”[16]

For many years, Waldron has advocated “regime change” in China. As the Washington Post reported in 2000: “Waldron bluntly asserts that American interests would be better served if China’s communist leaders were displaced. ‘I worry that if China continues on its current trend, which is repressing at home and building up armaments, that becomes very dangerous. I agree with people who think regime change is key to a really stable peace.’”[17]

In an October 2005 speech given in Taiwan at the World Forum for Democratization in Asia, Waldron argued that China’s economic success was bolstering regime “apologists”: “With respect to China’s headlong military buildup, I would develop the argument that it is the product not of any real external threat, but rather of an internal need to invoke security to justify autocratic rule. I would note how the buildup is increasing tension and distrust in the region, which harms China not least, and note that a democratic China would be a far better neighbor. China’s apparent economic success combined with dictatorship has given new life and hope to the world’s dictatorships and their apologists, while harming the movement for world democracy.”[18]

Waldron has repeatedly warned about the purported dangers of a Chinese military buildup, making alarmist claims as to the significance of such buildup. In a May 2006 article entitled “The Pentagon’s Latest China Report,” Waldron wrote, “China is developing a formidable military force that makes no sense at all unless one assumes that a ‘grab for power’ of some sort is its rationale.”[19]

Waldron has published numerous books articles, letters, and opinion pieces. He has written for the Financial Times, Orbis, and Commentary. His books include The Great Wall of China: From History to Myth (1989); The Modernization of Inner Asia (1991); From War to Nationalism: China’s Turning Point, 1924-1925 (1995); and (with Daniel Moran) The People in Arms: Military Myth and National Mobilization since the French Revolution (2003).

[11] Arthur Waldron, “Arthur Waldron on Taiwan, China, the US, and the future,” The View from Taiwan, October 3, 2011,http://michaelturton.blogspot.com/2011/10/arthur-waldron-on-taiwan-china-us-and.html.

[12] Arthur Waldron, “Arthur Waldron on Taiwan, China, the US, and the future,” The View from Taiwan, October 3, 2011,http://michaelturton.blogspot.com/2011/10/arthur-waldron-on-taiwan-china-us-and.html.