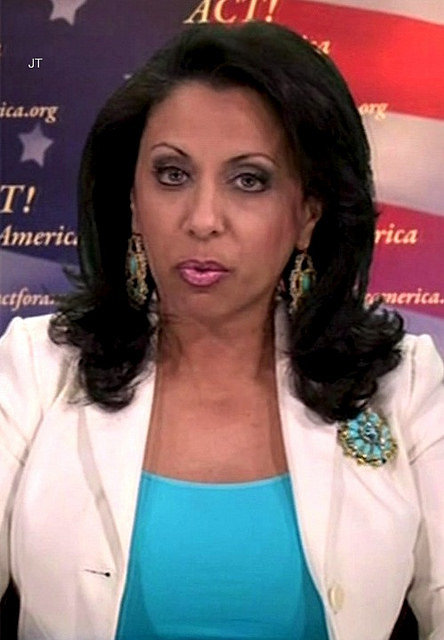 Brigitte Gabriel (originally Hanah Kahwagi Tudor) is an anti-Islamic author and activist who is characterized by civil rights groups as being a member of the “anti-Muslim inner circle”[1] and a “leading light of the Islamophobia network.”[2] Gabriel has made a career of denouncing Islam, decrying “political correctness,” and promoting the concept of a clash of civilizations between the Muslim world and the West. She is founder of ACT! for America, described by the Southern Poverty Law Center as a hate group, and has served on the board of the Intelligence Summit and as a contributing editor for Family Security Matters. She is the author of the bestsellers Because They Hate (2006) and They Must Be Stopped (2008).[3]

Gabriel often draws media attention because of her extremist statements about Islam, like saying that a practicing Muslin”cannot be a loyal citizen of the United States.” According to the New York Times, Gabriel promotes “a portrait of Islam so thoroughly bent on destruction and domination that it is unrecognizable to those who study or practice the religion.”[4] She argues that Muslim extremists have declared jihad “on Christians, Jews, non-Muslims, and secularists worldwide  … simply because we are infidels”[5] and claims that “tens of thousands of Islamic militants … reside in America operating in sleeper cells, attending our colleges and universities.”[6] 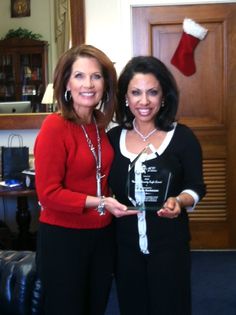 Gabriel has been an enthsuaistic backer of Donald Trump. During the 2016 presidential election campaign she argued that the election of Trump was necessary “to save western civilization.” She has been a vocal proponent of Trump’s controversial executive orders limiting immigration and refugees and has claimed to have access to the Trump White House. Responding to a March 2017 Tweet in which Gabriel claimed to be preparing for a White House meeting, the director of the Council on American-Islamic Relations said:  “No White House official should be meeting with the leader of a hate group that is one of the main sources of growing anti-Muslim bigotry in our nation,”

Gabriel was a vocal critic of President Barack Obama. She once argued that Obama was unable to say “anything bad about Islam” because of his “beautiful childhood memories” of “praying just like Osama bin Laden prayed.”[7]

Parroting conspiracies pushed by Frank Gaffney and the far-right Center for Security Policy, Gabriel has been a leading advocate of the conspiracy theory that  Islamic extremists have infiltrated “the C.I.A., at the F.B.I., at the Pentagon, at the State Department.”[8] She has claimed that “Hamas has cells in over 40 states in the United States”[9] and that members of ISIS “are coming through the Mexican border” into the United States.[10]

Born Hanah Kahwagi Tudor to a Maronite Christian family in Lebanon, Gabriel traces her hardline views on Islam to her upbringing during Lebanon’s 15-year civil war. “The war was a chaotic stew in which ever-shifting alliances of clan-based militias made up of Christian, Shiite, Sunni, Palestinian and Druse made war on one other, often with the backing of other countries,” noted the New York Times in a 2011 profile of Gabriel. “But in the rendering Ms. Gabriel shares with her American audiences, it was black and white. As her father explained to her, ‘The Muslims bombed us because we are Christians. They want us dead because they hate us.’ (The refrain became the title of her first book.)”[11]

Gabriel offers a stark vision of her upbringing. “I was ten years old when my home exploded around me, burying me under the rubble and leaving me to drink my blood to survive, as the perpetrators shouted, ‘Allah Akbar!’” Gabriel said in a 2010 address to the Intelligence Summit in Washington, D.C. “My only crime was that I was a Christian living in a Christian town. At 10 years old, I learned the meaning of the word ‘infidel.’ I had a crash course in survival. Not in the Girl Scouts, but in a bomb shelter where I lived for seven years in pitch darkness, freezing cold, drinking stale water and eating grass to live. At the age of 13, I dressed in my burial clothes going to bed at night, waiting to be slaughtered. By the age of 20, I had buried most of my friends–killed by Muslims. We were not Americans living in New York or Britons in London. We were Arab Christians living in Lebanon.“[12]

Some critics have questioned aspects of Gabriel’s story. For instance, she has claimed that her family was attacked by Hezbollah in the 1970s, despite the fact that the group was not actually formed until after the Israeli occupation of southern Lebanon in the 1980s.[13] One Lebanese critic alleged that Gabriel’s account of her upbringing was “overdone” and described her use of the story in her activism as a “con act.”[14]

In Lebanon, Gabriel launched a career in television, serving as a news anchor for an Israeli-funded TV channel linked to the Southern Lebanon Army, a Lebanese militia that fought alongside the Israeli Defense Forces and several Christian militias in Lebanon’s civil war. She later moved to Israel, where she worked for a station owned by U.S. evangelist Pat Robertson’s Christian Broadcasting Network.[15] Regarding her views on Israel, Gabriel later told a convention of Christians United for Israel that the difference “between Israel and the Arabic world is quite simply the difference between civilization and barbarism.”[16]

Gabriel married an American co-worker she met while working in Israel and relocated to the United States in 1989. “I lost Lebanon, my country of birth, to radical Islam,” she once wrote. “I do not want to lose my adopted country America.”[17]

In October 2003 she founded ACT!, which describes itself as “tthe only national security grassroots organization in America” and purports to have “over 1,000 chapters across the country and 279,000 members.”[18] The group has popularized “the notion that American Muslims are just biding their time until they gain the power to revoke the Constitution and impose Shariah law in the United States.”[19] Much of ACT!’s work has consisted of pushing so-called “anti-sharia” laws in state legislatures, fighting school curricula it deems too sympathetic to Muslims, and distributing anti-Islamic literature and talking points. The group has also attempted to set up campus chapters to counter the purported influence of Muslim student groups, a campaign that came on the heels of a failed effort to get the University of California at Los Angeles to ban its Muslim Student Association.[20]

ACT!’s website says that the organization is nonpartisan and non-sectarian. But observers report that “the organization draws on three rather religious and partisan streams in American politics: evangelical Christian conservatives, hard-line defenders of Israel (both Jews and Christians), and Tea Party Republicans.”[21]

ACT! at one time housed the Thin Blue Line” project, a “one-stop internet resource for information concerning the perceived threat of Muslim infiltration and terrorism in the country.” The project’s website stated it was “administered by law enforcement professionals and contains forums and chat rooms for vetted law enforcement personnel.” According to the Southern Poverty Law Center, the project’s “key component” was a “Radicalization Map Locator,” which listed “the addresses of every Muslim Student Association (MSA) in the country as well as a number of mosques and Islamic institutions.”[22]

Gabriel’s pro-Israel, anti-Islamic politics and personal history have made her a popular figure on the right-wing speaker circuit and in conservative media outlets. She gained particular notoriety after a 2014 appearance on a Heritage Foundation panel on the Benghazi attacks, where she was part of what one critic called “a veritable Dream Team of Islamophobes, birthers, and conspiracy nuts.”[23] At one point, in an incident reported by the Washington Post, a young Muslim American woman named Saba Ahmed challenged the panel on the sweeping generalizations its members had made about Muslims. Gabriel “pounced,” according to the report: “She said ‘180 million to 300 million’ Muslims are ‘dedicated to the destruction of Western civilization.’ She told Ahmed that the ‘peaceful majority were irrelevant’ in the attacks of Sept. 11, 2001, and she drew a Hitler comparison: ‘Most Germans were peaceful, yet the Nazis drove the agenda and as a result, 60 million died.’ ‘Are you an American?’ Gabriel demanded of Ahmed, after accusing her of taking ‘the limelight’ and before informing her that her ‘political correctness’ belongs ‘in the garbage.’”[24]

Although she was widely criticized for bullying the student, Gabriel nonetheless bragged about the incident in an ACT! fundraising appeal, which accused Ahmed of being tied both to terrorists and the “radical Occupy” movement.[25]

Discussing Gabriel’s “180 million to 300 million” claim, Christian Science Monitor reported: “While conducting research for a 2014 book he coauthored, Euro Jihad, [Angel Rabasa] found that Western European intelligence agencies estimated that less than one percent of the Muslim population living within their borders are at risk for becoming radicals. … According to Rabasa, a ‘radical’ Muslim could also be an individual who belongs to an Islamist organization that is advocating for a Sharia legal system, but does not embrace violence to bring this to fruition.”[26]

[2] Center for American Progress, “Fear Inc.: The Roots of the Islamophobia Network in America,” August 2011, http://cdn.americanprogress.org/wp-content/uploads/issues/2011/08/pdf/islamophobia_intro.pdf.