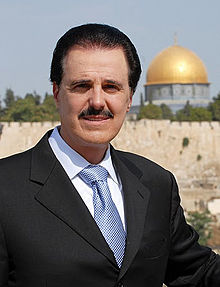 Michael D. Evans is a prominent Christian evangelical author whose works promote a hardline Christian Zionist[1] view of the Israeli-Palestinian conflict, in which defending Israel is seen as a Christian duty to fulfill Biblical prophecies.[2] He claims “Islamofascists” pose the “greatest threat America has faced since the Civil War.”[3] Evans has wildly warned about “an Islamic ‘H’ bomb,” stating that Israel stands as “the last firewall between an Islamic H-Bomb and the West!.”[4]

A fervent opponent of a two-state solution to the Israeli-Palestinian conflict and backer of policies pursued by Israel’s rightist Likud Party, Evans has made common cause with right-wing groups like John Hagee’s Christians United for Israel (CUFI),[5] which views the return of Jews to the Holy Land as prerequisite for triggering a succession of prophetic events that will lead to the second coming of Christ.[6]

Evans is the founder of the Jerusalem Prayer Team (JPT), a group that aims to “enlist 1 million people in America to pray daily and 100,000 houses of worship praying weekly for the peace of Jerusalem.” On its website, JPT has a section called, “Why Pray for the Peace of Jerusalem?” Among the reasons given are that “the return of our Lord and Savior is directly related to Jerusalem” and that “most all prophecy points to Jerusalem and the end times; the new Temple being built, the Antichrist, the Battle of Armageddon and the 144,000 Evangelists.” Another reason listed is that “God pronounced a curse upon those who curse Jerusalem.”[7]

In the past, JPT’s board of governors included Pat Robertson, Joel Osteen, Jack Graham, Anne Graham Lotz, Tim LaHaye, John Maxwell, Jack Hayford, and Pat Boone. As of 2016, JPT does not list a board of governors on its website. Evans claims both Likud Party leader Benjamin Netanyahu and former Israeli prime minister Ehud Olmert as “close personal friend[s]”.[8]

A self-described “devout American-Christian Zionist leader” and “renowned Middle East expert,” Evans’ outspoken style has garnered him a reputation as a “shock jock for Armageddon,” as one commentator calls him.[9] His 2007 book, The Final Move Beyond Iraq: The Final Solution While the World Sleeps, argued in an alarmist and embellished style that Iran posed a major threat to U.S. security. Commented writer Bill Berkowitz, “[Evans’s] prose is pugnacious, a style you might expect from a writer who claims that he is giving the US its ‘final wake-up call.’ In the book, and in its promotional materials, such terms as ‘appeasement,’ ‘secular humanist God-haters,’ and ‘pro-Islamic radical sympathizers’ are tossed around as easily as if he were playing catch in the back yard.”[10]

Arguing that the book is part of his effort to save the “soul of America,” Evans contends in the The Final Move Beyond Iraq that the social revolution that began in the 1960s was destroying the country and its “moral clarity,” leading to numerous battles that have “slowly stripped Christians in America of their rights.” He adds, “The American courts that espouse such movements as ‘gay rights,’ ‘abortion rights,’ and even ‘animal rights’ are now pursuing the right to be Godless.”[11]

After the book’s release, Evans emailed his supporters claiming that Iran is “planning a major surge in the next 30 days to kill as many American troops as possible.” Evans went on to urge his supporters to “purchase as many copies of ‘The Final Move Beyond Iraq’ as possible” because “this is the only book that reveals Iran’s plans in Iraq” and that “if you can drive the book to Amazon’s Top Ten bestseller list, the network shows will be calling and inviting me to speak to tens of millions of people.”[12]

Evans emerged on the national scene after the publication of his 1981 book, Israel: America’s Key to Survival. According to critic Robert O. Smith, the cover of the book “depicts a scimitar [curved-blade sword] with Arabic on the blade held by a hand wearing a Soviet, hammer-and-sickle ring, ripping through the joined flags of the United States and the State of Israel.”[13]

In 1988, Evans organized a simulated concentration camp experience designed to tell the story of Corrie ten Boom, a Dutch Christian evangelical who hid Jews in her home during the Nazi occupation and was imprisoned at the Ravensbrück concentration camp.[14] Ten Boom, who died in 1983, serves as a continual source of inspiration for Evans. Evans founded, and his wife Carolyn runs, the Corrie ten Boom Fellowship,[15]

In late 1994, Evans made a trip to Phnom Penh, Cambodia, as part of a “publicly advertised crusade” to the largely Buddhist nation that apparently promised faith-healing services to the sick and disabled. On the third day of the scheduled five-day stadium event, Khmer Rouge members preempted the proceedings by threatening to blow up the stadium. After being escorted back to his hotel, an angry mob gathered and threatened to kill Evans, and police secreted him to a flight out of the country.[16] One of the ministers attending the event told a reporter that some of those at the event had gotten angry because Evans radio and television ads had promoted miraculous healings and they expected Evans to perform miracles. A relief worker at the event said, “People were left with the impression that [Evans] was some type of ‘god-man’ [who] had mystical, healing powers.”[17]

Evans is the author of more than 30 books, including Showdown with Nuclear Iran: Radical Islam’s Messianic Mission to Destroy Israel and Cripple the United States (2006), The American Prophecies: Ancient Scriptures Reveal Our Nation’s Future (2004), Beyond Iraq: The Next Move (2003), and Jerusalem Betrayed: Ancient Prophecy and Modern Conspiracy Collide in the Holy City (1997).

Evans often frames his foreign policy ideas within the framework of Christian Zionism. In Beyond Iraq, for example, Evans endeavors to employ Christian scripture to justify his opposition to Israeli-Palestinian peace initiatives. Discussing the book, Robert O. Smith writes, “Instead of ‘forcing’ Israel to enter into a land-for-peace settlement, Evans argues that ‘both the Old and New Testaments make abundantly clear that Christians must support Israel in every possible way.’ To this end, Evans identifies Genesis 12:3 as a ‘selfish reason’ Christians should support Israel: ‘When we support Israel we are supporting the only nation that was created by an act of God. We are declaring that the Bible is true…. Yet if we touch Jerusalem, which is prophecy, America will lose the blessing of God and America will tragically lose the war on terrorism.’”[18]

In a 2007 article for his own online publication, Jerusalem World News, Evans lambasted efforts to pursue a two-state solution to the Israel-Palestinian conflict, writing: “The acceptance of this vile plan would turn Israel into a living hell. The Jewish people would be forced to live next door to a state controlled by Islamic fanatics such as Hamas. I am reminded over and over of the scripture in Psalm 83:2-5: For behold, Your enemies make a tumult; and those who hate You have lifted up their head. They have taken crafty counsel against Your people, and consulted together against Your sheltered ones. They have said, ‘Come, and let us cut them off from being a nation, that the name of Israel may be remembered no more.’ For they have consulted together with one consent; they form a confederacy against You.”[19] Evans went on to promote his own peace plan in which U.N.-maintained Palestinian refugee camps would be dismantled and other Arab states, with an emphasis on Jordan, would resettle all Palestinian refugees within their borders. “The Palestinians do not need more land; they need a life free of Islamic kindergarten camps that continue to instill hatred for the Jews into children at an early age.”[20]

In a 2014 article, Evans accused Secretary of State John Kerry of “holding a “boycott” gun to the head of Israel.” He added: “The threat is that if Israel does not acquiesce to pressure from Secretary of State Kerry, the U.S. would lead a boycott against Israel—one that would decimate its economy and make the Jewish state even more vulnerable.”[21]

Evans also stringently opposed the nuclear negotiations between Iran and six world powers that successfully ended in a historic deal in July 2015. He wrote in 2013: “Much as did Herod, he [Barack Obama] also has his own agenda—to find a way to push the Iranian crisis into the hands of the next president. Mr. Obama would then be able to go down in history as an anti-war president no matter the cost.” He went on to claim that a “former director of Israel’s atomic agency” told him that if Iran “goes nuclear,” there will be “worldwide Armageddon” within ten years.[22]

Sales of Evans’s books have been driven by his networked websites and e-mail lists, which encourage supporters to buy multiple copies. Websites affiliated with Evans include Jerusalem World News, Jerusalem Prayer Team, the Evans Institute for Middle East Studies, and Save Jerusalem, as well as corresponding book-specific websites.[23] The websites each appeal to a unique audience, but they all share the motive of soliciting contributions that appear to funnel into the Corrie ten Boom Fellowship. In the 2006 tax year, the Corrie ten Boom Fellowship received almost $1.3 million from direct public contributions. Carolyn Evans serves as the president and in 2006 received a $48,375 car as “compensation for services performed for the ministry.”[24]

Evans’s articles have appeared in a number of major newspapers, and he is frequently invited to comment on foreign policy issues by mainstream and rightist radio and television programs. According to his biography, Evans “has appeared on hundreds of network television and radio shows including Good Morning America, Cross Fire, Nightline, The Good Morning Show (Great Britain), and appears frequently on the Fox Network, CNN World News, NBC, ABC, and CBS. Mike Evans has won more than fifteen national awards for his prime time specials based on his books.”[25] Evans has also appeared on Paul Vallely’s “Stand Up America,” a staunchly right-wing radio program (also available on the internet) that regularly features neoconservatives and hardline policy wonks as guests, including Michael Ledeen , Frank Gaffney of the Center for Security Policy , Brigitte Gabriel , Rachel Ehrenfeld , Caroline Glick, Mark Steyn, Kenneth Timmerman , Ann Coulter, Brad Blakeman of Freedom’s Watch , and Cliff May of the Foundation for Defense of Democracies .[26]

[7] Jerusalem Prayer Team, “Why Pray for the Peace of Jerusalem,” http://www.jerusalemprayerteam.org/why-pray-for-the-peace-of-jerusalem/.

[21] Michael Evans, “John Kerry Would Cut Israel in Half,” The Blaze, February 10, 2014,http://www.theblaze.com/contributions/john-kerry-would-cut-israel-in-half/.

[22] Michael Evans, “Un-Wise Men of Persia: The Gifts that Obama Brought to the Iranian People,” The Blaze, December 20, 2013, http://www.theblaze.com/contributions/un-wise-men-of-persia-the-gifts-that-obama-brought-to-the-iranian-people/.