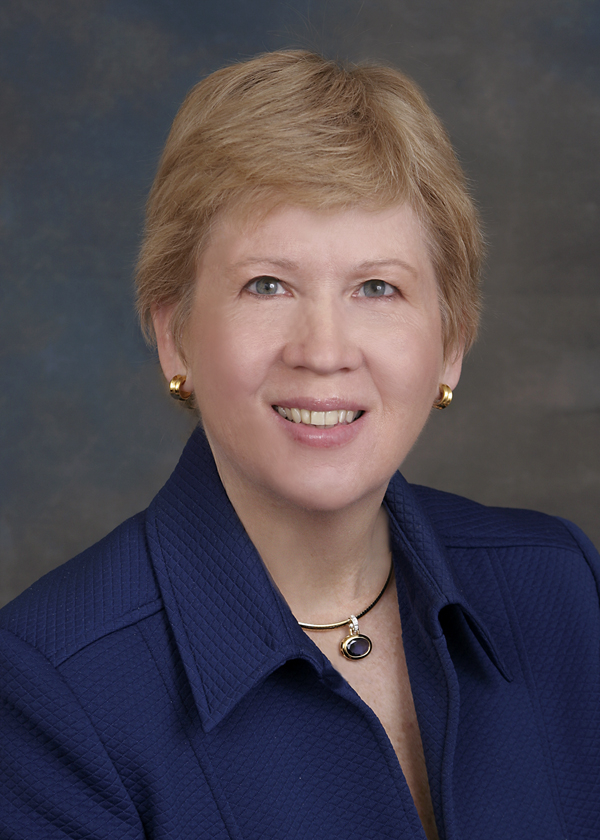 Clare Lopez is a widely cited right-wing conspiracy theorist with ties to a number of hawkish policy institutes who formerly worked as a CIA operations officer. Senior Vice President for Policy and Programs at the Center for Security Policy (CSP), Lopez has also been a vice president of the Intelligence Summit, a senior fellow at the Clarion Project, and a former executive director of the hawkish Iran Policy Committee.[1] She is best known for her racist rhetoric about Muslims and her claims that the Muslim Brotherhood “infiltrated” the U.S. government and that President Barack Obama “switched sides” on the war on terror.

During the 2016 election campaign race, Lopez initially backed Sen. Ted Cruz (R-TX), serving on his national security advisory team along with a host of like-minded activists such as CSP’s Frank Gaffney and Fred Fleitz, as well as Elliott Abrams and Andrew McCarthy. After Donald Trump won the GOP nomination, Lopez backed some of his misleading campaign claims, like that the United States paid a ransom to Iran for the release of U.S. citizens. Since Trump’s election, transition team insiders have reported that Lopez is in consideration for Deputy National Security Advisor in the Trump White House. 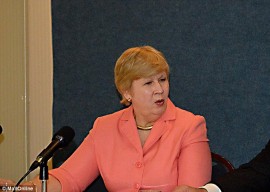 Since Trump took office, Lopez have proved a reliable ally. After Trump’s visit to Saudi Arabia in May 2017, Lopez said in an interview with Secure Freedom Radio that Trump had failed to aggressively challenge Islam and jihad. However, she added that Trump did well in pushing the Iran threat to the “collective mob leaders” of the Sunni world. In an April 2017 article for the right-wing Accuracy in Media, Lopez urged Trump to “make good on campaign promises” to “rip up” the Iran nuclear agreement, known as the JCPOA.

Central to Lopez’s geopolitical views is her strong demonization of Islam. “Shi’ite and Sunni are doomed to internecine combat over the centuries because both Islamic sects are bound to an ideology based on dominance, not good faith mutual concessions or participatory collaboration,” she wrote in a 2013 attempt to explain sectarian violence in the Middle East. “The name of this power-obsessed ideology is Islam.” She added, “With assassination, banditry, genocide, hatred-of-other, polygamy, rape, pillage, and slavery all divinely sanctioned in scriptures believed to be revealed by Allah himself, the world is not likely to see an end to Islam’s ‘bloody borders’ or ‘bloody innards’ any time soon.”[2]

Lopez claims that her view of Islam is self-taught. “The federal contractor I was working for [after 9/11] really didn’t understand anything about who this enemy was,” she told the National Journal in May 2014. “So I decided to teach myself.”[3] She has declared that even President George W. Bush was “obviously confused and mistaken when he called Islam a ‘religion of peace’ the day after 9/11.”[4]

Along with colleagues at CSP, Lopez is a vocal proponent of the notion that the U.S. government was infiltrated by Islamic extremists tied to the Muslim Brotherhood. She is the author of a 2013 Gatestone Institute report alleging the group’s involvement in a decades-long plot to infiltrate the U.S. government and spread “Sharia law” in North America through “front groups” like the Muslim Students Association and the Council on Islamic-American Relations, among other mainstream U.S.-based Muslim organizations.

Lopez claimed in the report that Muslim Brotherhood infiltrators may have convinced the Obama administration to provide backing to early Arab Spring uprisings, which she referred to as an “Islamic Awakening” that was “greenlighted” by a 2009 speech Obama made in Cairo. “The driving force of the so-called ‘Arab Spring’ is a resurgent Islam, dominated by the forces of al-Qa’eda and the Muslim Brotherhood,” Lopez asserted, dismissing the historic enmity between the Brotherhood and al-Qaeda as well as the widespread regional reaction against political repression and economic stagnation. “Energized as Islam may be at this time, however, without the active involvement of the United States to help arm, fund, support, and train the region’s Islamic rebels, it is questionable whether they could have gotten this far, this fast.” She went on to argue that “the takedown of U.S. national security defenses from within was critical to the current Middle East-North Africa (MENA) campaign to re-establish the Caliphate and enforce Islamic Law (shariah).”[5]

Though Lopez traced the purported “infiltration” as far back as the George W. Bush administration, she argued that the Brotherhood had achieved particular success under Obama. “Under the Muslim Brotherhood-influenced Obama administration,” she wrote, “U.S. policy has undergone such a drastic shift in the direction of outright support for these jihadist movements—from al-Qa’eda militias in Libya, to the Muslim Brotherhood in Egypt, and both al-Qa’eda and Muslim Brotherhood-linked rebels in Syria—that it is scarcely recognizable as American anymore.”[6] Lopez, who joined the so-called “Citizens Commission on Benghazi” that same year, later described the 2011 U.S. intervention in Libya as “the place and the time that the United States and the Obama administration formally switched sides in the Global War on Terror.”[7]

Lopez accused the Obama White House of “trying to be even-handed between the Shiites and the Sunni, especially with the Muslim Brotherhood clamoring in their ear.” She aso claimed that the Obama administration orchestrated the Arab Spring to make sure that North Africa goes to the “Sunnis: al-Qaida and the Muslim Brotherhood” and the Persian Gulf “goes to Iran.”[8] She argued that during 2011-2012, under the “request, pressure and urging of the Muslim Brotherhood,” the U.S. government “removed hundreds of pages of presentations, PowerPoint presentations, curriculum and the instructors” on Islam-related topics.[9]

Lopez’s embrace of conspiracy theories about the U.S. government has occasionally run afoul of her allies. In 2013, for example, Lopez was reportedly fired from the Gatestone Institute for promoting a controversial book by the right-wing author Diana West—who claimed (among other things) that the U.S. alliance with the Soviet Union against the Nazis was due to a Communist infiltration of the U.S. government. According to one account, Lopez’s work was generally “well received” by Gatestone founder Nina Rosenwald, but Rosenwald was pressured to fire Lopez over her “choice of books to promote.”[10]

In the aftermath of the 2013 Boston marathon bombing, Lopez gave several interviews in which she advocated increased surveillance of American Muslims, implying that agitation by Islamic activists had stifled such efforts in the past. “As terrorism expert Clare Lopez, a senior fellow at the Clarion Fund, emphasized to me following the Boston bombing,” wrote a columnist for the Philip Anschultz-owned Washington Examiner, “the FBI and local police need to be more aggressive in gathering intelligence in places that people like the [bombing suspect] Tsarnaevs gather, including mosques. The New York police were doing a great job in this regard until Muslim special-interest pressure groups got them to back down. Lopez contends that the FBI is now trained to avoid that sort of operation.”[12]

Lopez has made similarly sensationalistic claims regarding alleged Iranian influence in Washington. At CSP, she produced a 2009 study alleging that a “complex network of individuals and organizations with ties to the clerical regime in Tehran is pressing forward in seeming synchrony to influence the new U.S. administration’s policy towards the Islamic Republic of Iran.”[13] In various writings, Lopez has accused Iran of complicity in everything from the Lockerbie bombing to the 9/11 attacks, alleging that only the “protection” of the “U.S. leadership” has prevented Iran from being charged for crimes against humanity.[14]

Echoing other efforts by “pro-Israel” hawks to counter arguments about the influence of the “Israel Lobby” in the United States, Lopez claimed in her study that there was a “de facto partnership” between groups like the National Iranian-American Council and the Council on American Islamic Relations, which she said “must arouse deep concern that U.S. national security policy is being successfully targeted by Jihadist entities hostile to American interests.”[15] (For more on the “Arab Lobby,” see Samer Araabi, “The Real Middle East Lobby,” Right Web, November 24, 2010.)

Lopez concluded: “To be sure, efforts at influencing U.S. decision-making are common among a host of legitimate interest groups, including many foreign countries. But in this context, where the guiding force behind such influence operations emanate from the senior-most levels of a regime like Iran’s—which holds the top spot on the State Department list of state-sponsors of terror, makes no secret of its hatred and enmity for the United States and its ally, Israel, and acts in myriad ways to support those who have assassinated, held hostage, kidnapped, killed and tortured American civilians and military personnel over a 30-year period—such operations must be viewed with serious concern.”[16]

According Lopez, the Obama administration sought to make Iran the “nuclear power hegemon of the entire Persian Gulf region.”[17] She denounced the July 2015 Iran nuclear deal as supposedly obligating “the U.S. to both ‘assist’ and ‘encourage’ (not to mention ‘defend’) the Iranian regime’s nuclear weapons program.”[18]

In 2005, Lopez and Kenneth Timmerman founded the Iran Policy Committee (IPC), an organization that promotes regime change in Iran. IPC advisers included a host of well known hawks, such as Raymond Tanter, Paul Vallely, Thomas McInerney, Chuck Nash, and Bill Cowan.[19] IPC was a part of small cadre of U.S.-based organizations that have vigorously promoted the Iranian exile group the Mujahedeen-e Khalq (MEK), which for many years was on the State Department’s list of proscribed international terrorist groups. IPC was tied to a number of other advocates of Middle East intervention, including Ahmed Chalabi and the Iraqi National Congress.[20]

According to her previous bio on the CSP website, Lopez “began her career as an operations officer with the Central Intelligence Agency (CIA), serving domestically and abroad for 20 years in a variety of assignments, acquiring extensive expertise in counterintelligence, counternarcotics, and counterproliferation issues with a career regional focus on the former Soviet Union, Central and Eastern Europe and the Balkans.” The bio also says that Lopez worked for a time in the State Department’s Bureau of Diplomatic Security and has been a program manager for Hawkeye Systems, LLC.[21]

[14] Clare Lopez, “From Lockerbie to 9/11: Iran is Let Off the Hook,” Family Security Matters, March 9, 2014, http://www.familysecuritymatters.org/publications/detail/from-lockerbie-to-911-iran-is-let-off-the-hook#ixzz332pMIS4M.

[18] Clare Lopez, “How the Iran deal violates the Constitution,” The Hill, August 11, 2015, http://thehill.com/blogs/congress-blog/foreign-policy/250793-how-the-iran-deal-violates-the-constitution.

[15] Clare Lopez, “From Lockerbie to 9/11: Iran is Let Off the Hook,” Family Security Matters, March 9, 2014,http://www.familysecuritymatters.org/publications/detail/from-lockerbie-to-911-iran-is-let-off-the-hook#ixzz332pMIS4M.

[19] Clare Lopez, “How the Iran deal violates the Constitution,” The Hill, August 11, 2015, http://thehill.com/blogs/congress-blog/foreign-policy/250793-how-the-iran-deal-violates-the-constitution.